Well we finally got some cooler weather here in SW Louisiana! Not sure how long it's going to last but we're sure happy to have it. Feels like Fall LOL!

It is with great pleasure I bring you today's guest, Tyndale author, Cindy Woodsmall. Cindy is new to our blog so please give her a great, big, warm welcome.... 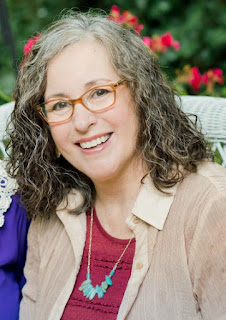 Cindy Woodsmall is an award-winning New York Times and CBA best-selling author who has written 20 works of fiction, including her most recent series, Amish of Summer Grove. Her connection with the Amish community has been widely featured in national media outlets, including ABC’s Nightline.

The Wall Street Journal listed Woodsmall as one of the top three most popular authors of Amish fiction.
RT Book Reviews recently presented her with a Career Achievement Award and gave her latest release, Gathering the Threads, a Top Pick review.

Woodsmall and her husband reside near the foothills of the North Georgia Mountains.

Learn more about Woodsmall and her books at www.cindywoodsmall.com. She is also active on Facebook (@authorcindywoodsmall).

So nice to meet you, Cindy! I'm excited to know what you treasure....

Isn’t it funny sometimes when we look back over life’s events and it seems as if time has moved in Fast Forward mode?

I have experienced that numerous times, and my writing career is one that’s flown by in many ways. A few months ago I was honored to receive Romantic Times Career Achievement Award. But usually it doesn’t feel as if I’ve been writing nearly that long.

My first book was published in 2006, but writing it and connecting with editors happened before then.

If we stepped back to 2004, we’d see that very few people had a smart phone, we backed up our files using “floppy disks,” and a fledgling writer named Cindy met a woman who would change her life: an editor named Shannon Marchese.

I’d had a story idea that had been on my heart for years, and that idea later became the Sisters of the Quilt series. But at the time, no one wanted to publish Amish stories. Beverly Lewis was the only writer of Amish fiction at the time, and most publishers felt the market couldn’t support two writers of Amish stories.

I met Shannon, an acquisitions editor for WaterBrook Press, an imprint of Random House, at a writers conference. She read the first few chapters of my manuscript and asked to see the rest. Soon enough I was under contract, and before the book was released, I flew to Colorado for an event. While there Shannon gifted me with something special, a book by Lois Lenski called Shoo-Fly Girl. 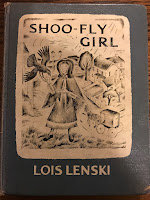 This treasured book was published in 1963, and it shares the daily life of a young Amish girl, named Suzanna, nicknamed Shoo-Fly.

The author, who’d written several juvenile fiction regional books, had taken the time to be authentic with each aspect of Amish living. The book includes precious illustrations and a yummy recipe seen below.

Use fork to create a crumb/crumble mix. Set aside.

Mix with half of the crumbs, do not beat
Pour into a pie shell and cover with the remaining crumbs 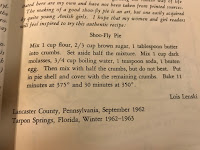 What are some of your childhood books that “hold up” when you read them today?

Oh wow, what a treasure, Cindy and that pie sounds delicious! I haven't read any childhood favorites lately, might have to though.

Thanks so much for sharing with us today. Now please tell us a little about your new book, Gathering the Threads....

Finally back in the Old Order Amish world she loves, will Ariana's new perspectives draw her family closer together---or completely rip them apart?

After months away in the Englisch world, Ariana Brenneman is overjoyed to be in the Old Order Amish home where she was raised. Yet her excitement is mixed with an unexpected apprehension as she reconciles all she's learned from her biological parents with the uncompromising teachings of her Plain community. Although her childhood friend, ex-Amish Quill Schlabach, hopes to help her navigate her new role amongst her people, Ariana's Daed doesn't understand why his sweet daughter is suddenly questioning his authority.

What will happen if she sows seeds of unrest and rebellion in the entire family?

Meanwhile, Skylar Nash has finally found her place among the large Brenneman family, but Ariana's arrival threatens to unravel Skylar's new identity---and her sobriety. Both Ariana and Skylar must discover the true cords that bind a family and community together and grasp tight the One who holds their authentic identities close to His heart.

Readers can learn more about Gathering the Threads and purchase a copy HERE.

Sounds like a lovely book, Cindy and we wish you the best of luck and God's blessings with it.

Hope you enjoyed today's post friends and that you'll check back each week for Tuesday Treasures, Thursday Thoughts and Saturday Spotlight.

Took a screen shot of the recipe! Can't wait to try it. :) Best and Blessings on your release!

You clearly have much to be proud of in your career. My husband and I have visited the Amish country and find it fascinating. It's not surprising that Amish novels are popular. Congrats on your never book.

That recipe does look yummy!

I love, love, love the Amish country. Thank you for taking me back there. I enjoyed this post. Recipe sounds yummy. Good luck to you!

Thanks to Pam for introducing and hosting another excellent guest!