Well a lot has happened in the last week and I promise to give you an update soon. I'm trying to get back on a regular blogging schedule, but until I do, please welcome White Rose Author, Paula Mowrey with her debut novel, The Blessing Seer! 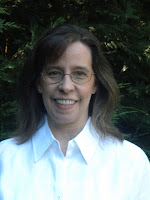 Paula Mowery is a pastor’s wife and a homeschool mom. She has always been an avid reader of Christian fiction. She began writing in the area of nonfiction creating three Bible studies which were self-published. However, she crafted fiction stories which she shared with friends and family. When one of her readers encouraged her to pursue publication, she joined American Christian Fiction Writers, learning more about the world of fiction. Her debut work of fiction is a novella published by Harbourlight, a division of Pelican Book Group – THE BLESSING SEER.

Learn more about Paula at her blog – www.paulamowery.blogpost.com.
Read more of her writing in her monthly columns on ChristianMagazine.org.

When God sends Addy a special messenger who challenges her to step from her comfort zone, she isn’t sure she’s up to the job. She feels inadequate to take on the task of encouraging others, and when she starts seeing visions, she worries she’s losing her mind.

Yet, Addy wants only to be used by God, even if that means seeing visions and risking relationship with family and friends. By stepping out on a limb, can Addy really accomplish something significant for God? What affect will her surrender to His will have on those around her? And, what affect will it have on her own life?

Excerpt:
I hesitated, then I extended my hand.

“I’m sorry I don’t believe I’ve had the pleasure. I’m Addy Townsend.” I was actually “fishing” when I said this. I didn’t know who this man was or where he had come from. He didn’t favor the man I had seen earlier in the car. I definitely had no idea why he had immediately begun to discuss the very topic that buzzed in my head. And in this day and time, should I be running from him?

When he placed his hand in my outstretched one, words failed to express the feeling. As odd as it may sound to even my ears, his touch radiated peace like a warmth that rushed from his hand throughout my body and calmed my restlessness. I sensed no need to flee.

“Nice to meet you, Conrad. I’ve never seen you around here. Have you recently moved into the neighborhood?”

“No, just passing through.”

He began to stroll once again, and I fell into step beside him. It felt familiar, as if I had taken this walk with him on numerous occasions. I started to engage in friendly conversation by commenting on the weather or leaves, but I never had the opportunity.He launched the conversation himself.

“Blessings are often contingent on obedience.”

I contemplated that a moment. I considered what I knew from Scripture about the topic of blessing.
“I suppose you’re right, at least historically speaking. I mean, God promised blessing to the Israelites if they would obey.”

His face beamed as if he were proud I had answered correctly, and I smiled for his words to me brimmed with compliment. The ease of conversation with a stranger surprised me. Normally, I would only engage in such dialogue with those closest to me, and admittedly, possibly not even then.

“Yes, He definitely blesses us with much we don’t deserve.”

“It is His very nature.” He stated this in a most matter-of-fact manner.

He stopped and looked at me. His eyes brimmed with compassion. His expression and posture exuded sorrow. “Yes.” His voice was low, and I thought a tear might emerge for the deep emotion I sensed from him.

Silence ensued. I felt the need to cease the intensity of the moment.

“It’s a shame that we would miss out on God’s blessings. If only we knew what God was up to.”

Now Conrad’s eyes seemed to look to my very soul. My pulse quickened. I bit my lip and began to fidget.

“If you knew the blessings God had in store for others, would you tell them?”


Wow, sounds like my kind of read! Get your copy of The Blessing Seer for only $2.99 @ Pelican Book Group or Amazon.com!

I have a friend who is virtually homeless ~ She has a chance to start over but needs our help! So for the month of August, I'm running an Ad campaign to help her....50% of all ad sales from the special listed here will go to help this woman get on her feet!

To Thank You for your help I'm offering the following deals:

Donations are welcome also!
Please send through PayPal to: twjadsales@gmail.com

Advertising Info - The Wordsmith Journal Magazine
Posted by Pamela S Thibodeaux at 9:39 AM 1 comment:
Email ThisBlogThis!Share to TwitterShare to FacebookShare to Pinterest

Been a while since we had a Saturday Spotlight and today please welcome fellow Five Star author, Susan Oleksiw as she shares some insight on writing with us!

The Blank Page
by
Susan Oleksiw

Anyone who writes eventually faces the same problem--the blank page. Some mornings we sit down at the computer and the cursor just sits there blinking back at us. You can just hear the inner workings squeaking among themselves--waiting for something to happen. And there sits the blank page.

Over the years I've come to rely on a number of techniques to help me through those troughs of despond, the desert land of no ideas. First, I comfort myself with the reminder that every writer goes through this at one time or another. Some days you're just flat, flat out of ideas and flat out of words. Okay, once I get that behind me, it's time to get down to work.

Before that blank page is another page. I go back to what I wrote the day before and reread it. There's always something that can be improved upon, especially dialogue, which I consider one of my weak spots. The more deeply I get into the scene from the previous day, the more likely I am to be able to continue at the end of it.

If I'm still at a loss when I finish editing that scene, if the blank page still looms, I go over my notes on the specific things that have to happen. I keep a list of clues that have to be dropped in, scenes that have to occur later, to achieve a particular purpose, and I select one to work on. This is usually a matter of choosing which character will deliver an important piece of information, and I can develop the scene however I want. This work usually unclogs the writing brain, and after writing this scene I feel ready to face the section that was such a problem.

Sometimes that cursor, however, will not move, and the scene I thought would start to flow is still nowhere to be found in my imagination. This is actually something worth writing about, and I lay out the problem on the blank page. Who is this character and why is she or he giving me such a hard time? Once or twice the character has talked back, and that's probably the only clue anyone needs that the writer has not been listening.

Sometimes at this point, usually early in the writing, I realize I have to go back to the beginning and rework a particular character. In A Murderous Innocence, the character Tiny is only meant to appear in one or two scenes in the beginning, to deliver a particular line, and then disappear. But Tiny wouldn't deliver the line the way I wanted. Everything I tried fell flat. When he had to reappear in a later scene, he still wouldn't fit into the mold I had in mind. Curious about who he might really be, I started writing the scene without any preconceptions in mind. Out of that change emerged a character who had a much fuller life, even as a homeless man, and a much greater personal character than I had imagined. I came to like Tiny enormously but not nearly as much as my readers. At various library talks and panels, readers asked about Tiny, where he came from or how I developed him. Something in Tiny struck a chord in readers.

Something similar happened in The Wrath of Shiva, when Anita Ray is visiting her family in the countryside. She sees a maidservant fall into a trance, something I had not intended. After that, there wasn't much I could do but let the woman be who she was. The maidservants in this book became women in their own right--Gauri and Bindu were not about to conform to my visions of them; they emerged in the story as the women they wanted to be. To my surprise, they gave me one very tender scene, after the exorcism, and opened the door for future stories.

The blank page is sometimes a lot more than the sign of being tired or out of ideas. For me it is often a hint that this page can't be written until previous pages have been revised. The emergence of Tiny and Gauri and their personalities are two of the most obvious results, so I don't despair when I hit that blank page. I take it as a sign that there is more work to be done in the preceding pages, and that after that is done the story will flow more smoothly and deeply.

BIO: Susan Oleksiw is the author of the Mellingham series featuring Chief of Police Joe Silva, who appears in five books, and a second series featuring Indian American photographer Anita Ray, Under the Eye of Kali (2010) and The Wrath of Shiva (2012). Oleksiw compiled A Reader’s Guide to the Classic British Mystery (1988), and was consulting editor for The Oxford Companion to Crime and Mystery Writing (1999). Oleksiw was a co-founder of Level Best Books and The Larcom Press.


Find out more about Susan by visiting her website and blog! 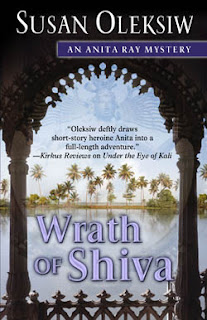 In a starred review from Library Journal for The Wrath of Shiva:

Traditional beliefs, cultural expectations, and old-fashioned detecting make for a captivating cozy not to be missed. Beguiling Anita Ray winningly returns after her first entry, Under the Eye of Kali.


Excerpt from The Wrath of Shiva:

Really, Anita couldn’t understand why her Auntie Meena disliked Anand so, but she didn’t try to hide it. She looked grim when he came by the hotel for any reason, and whenever Anita mentioned his name. Whenever she talked about family marriages that had gone bad, Auntie Meena had taken to slipping in some minor comparison between Anand and the disappointing husband or suitor. If Anita protested, Meena said only, “He is unsuited to you, unsuited in every way.” But Anita didn’t think he was unsuited at all. Anand Nambudiri suited her just right—unattached, out for some fun, and the son of crazy parents who thought Anita had found the secret of life—unlike her own relatives who were convinced Anita was heading for disaster every time she walked out the door.


The Wrath of Shiva can be purchased from Amazon.com!

Well friends, hope you enjoy this rare treat! Stay tuned for other spotlights in the near future.