Today's guest is brought to you by Kathy Carlton Willis Communications. Enjoy!

“ Women in High Def will remind you that when God writes your story, you are in for the adventure of a lifetime! Diane Markins has written a book addressing topics women deal with on a day-to-day basis. If you are looking for a contemporary, captivating read filled with practical advice that will give you insight and wisdom for daily decisions, this is it!”
~ Carol Kent, Speaker and Author
Between a Rock and a Grace Place (Zondervan)

To celebrate the “Going Boldly” Blog Tour Women in High Def is available for free from September 10-September 14 on Kindle at: http://amzn.to/Oey7Sa

About the Book:
(Check out the Website)
Women are as unique as snowflakes or butterflies, but after surveying hundreds of them, writer and radio host Diane Markins learned that the top needs they feel are the same. She also began hearing a recurring theme: I want more! I want to be better! I want to be bold!
Women in High Def aims to propel women out of a low-def, foggy life of going through the motions in a blur. The profound stories, intercessory prayer prompts and coaching elements work together to catapult women into living fearlessly for God…being bolder moms, having purposeful passions, pursuing marriage excellence, loving themselves with gusto, laughing with abandon, transforming mistakes into blasts of blessings and bravely seeking the Lord in all His majestic glory. The bonus Bible study at the back of the book points them to scripture to gain Biblical insight and direction for each need and role they play. It can be used alone or in a group.

Women in High Def is not passive reading. It cries out to the spirit of readers to be unafraid as they actively reach for clarity, vibrancy and intensity in all the meaningful areas of their lives.
About the Author:
Diane Markins has always aspired to live in High Def. She uses her radio show, writing and speaking to inspire women to transform their lives from mediocre and complacent to bold and vibrant. She settles for nothing less in her own life as a wife, mom, grandmother, friend and colleague. Diane writes two blogs,WomenInHighDef.com and WordsInHighDef.com, is a regular contributor to the Presidential Prayer Teamwebsite and CBN.com. She and her husband of 33 years work and live close to their children in Arizona.

Falling Down Gorgeous
(Excerpt from Women in High Def: Boldly Living Your Purposes with Vibrant Clarity)
Time takes its toll on all of us. Parts of me that were once up here are now down there. My face, once smooth and fresh was becoming a bit weathered and wrinkled. Other areas that used to be firm are now wiggly. As I turned fifty I began to notice that I was becoming invisible, based on my appearance. That’s a big fat horse pill to swallow for my ego. But that’s okay. The good news is that when people start to see less of me, they see more of Jesus. He’s much more appealing and has no hidden agenda.
I hate to admit it, but I still enjoy being noticed on occasion. My husband and I went on a date to a very fancy mountaintop restaurant overlooking the city. I dressed for the occasion in my fitted black slacks, silky blouse and high heels.
I followed the maitre de to our table, my husband right behind me. I was feeling pretty good about myself and strutted a bit as we crossed a large open expanse of the room. As my stilettos went from carpet to wood floor something strange happened…I began to skate, stumble and flail about, for what felt like ten excruciating minutes, before finally landing flat on my keister. For endless moments all sound ceased except the quiet music in the background. Diners, servers and kitchen staff gaped at me, frozen in mid-action.
Graciously, I was helped up, escorted to and seated at our table, where they elevated and iced my swollen ankle. Then—to my horror—the paramedics arrived, causing an even bigger stir. Servers and managers came by frequently to check on me. Finally, our fellow diners made their way to our table as they departed to share their own “fall down” tales.
Earlier that evening, I had hoped for a little extra attention. But this wasn’t what I had in mind. Now I was just grateful I hadn’t chosen the skirt I had considered that was still hanging on my closet door. My experience that night was a great reminder that the only beauty that matters is what the Lord puts in our hearts. Everything else “falls” short in the end.

Why Bold is Better
by Diane Markins

“Your dress has really bold colors.” Does that sound like an insult in any way? How about this one: “That was a really bold choice.” Would you consider this criticism?

I hope not! I’d never wear something that would melt into the background of a beige room. I’d hate it if someone said, “You made a very safe, easy choice.”

Being bold means taking risks, not fearing failure or rejection and requires intentional thinking. When we live boldly for God we have empowerment and passion to make our boldness meaningful.

Settling for mediocrity in marriage, as parents, in careers, friendship, faith or ministry is not bold. God wants us to pursue everything we do with intensity and decisiveness. This means we are frequently checking the pulse of our pursuits and rapidly responding when we get a distress signal.

Is your marriage (especially in bed) ho-hum? Find some bold ways to rev it back up. Are your kids struggling? Don’t just shrug and follow the “traditional wisdom,” think creatively about taking brave actions no one else would.

Do your prayers feel more like talking to the ceiling fan than conversations with a wise, cherished friend? Do something wild and new to transform.

Don’t confuse boldness with arrogance or recklessness. When your bold actions are paired with love, respect and clarity the results will translate as conviction with complete humility.

Jesus has a bold message and He is asking you to not only share it, but live it! Bold is truly better.

Until later.... Be Blessed!
PamT

Well another 4 weeks have passed and I'm still not settled and organized enough to blog regularly but I keep working toward that! A lot has happened since my last post. August 18th marked the 3yr anniversary of my husband's death and was a day of mixed emotions as I had a funeral AND a wedding to attend that day! The next week I drove to Durant, OK for a speaking engagement - loads of fun! Now, I'm settled back in LA and doing my best to wrap up several projects, keep The Wordsmith Journal Magazine running smoothly and hopefully start the new year a lot more organized and fruitful! This my friends, is my life in a nutshell LOL!

Now without much further ado, please welcome Linda Rondeau to our Saturday Spotlight with her new book, America II The Reformation.

Winner of the 2012 Selah Award for best first novel (The Other Side of Darkness/Harbourlight), LINDA RONDEAU, writes for the reader who enjoys a little bit of everything. Her stories of redemption and God’s mercies include romance, suspense, the ethereal, and a little bit of history into the mix, always served with a slice of humor. Walk with her unforgettable characters as they journey paths not unlike our own. After a long career in human services, mother of three and wife of one very patient man, Linda now resides in Florida where she is active in her church and community. Readers may visit her web site at www.lindarondeau.com. Her second book, written under L.W. Rondeau, America II: The Reformation, Trestle Press, the first in a dystopian trilogy, is a futuristic political now available in ebook on Amazon.com and Barnes and Noble. Print edition will be available September 7. She is also contracted with Trestle Press for a prequel to her America II trilogy called The Rising. This will appear in serial form. Volume One will be released soon. An Adirondack romance will be released in October by Lighthouse of the Carolinas in time for the Christmas season and is called, It Really Is a Wonderful life. 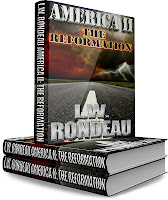 Following unprecedented climatic changes, resultant pestilence and war brought the world into chaos. Eventually, each nation surrendered its sovereignty to form a global democracy, initially known as The Accord. However, the democratic government proved too weak and was soon replaced by a faux democratic rule.
The year is 2073, and current governor of Western America Province, Edwin Rowlands, is poised to become the Constitutional Government’s second president. Many fear that the sweeping reforms found in his proposed Preservation Act will set him up as a dictator. If enacted, defection both past and present would become a crime punishable by death, thus bringing all outlands into crushing subjection.

While most believe reform is critical, factions disagree on how to prevent the Preservation Act from becoming law. Ahmed Farid, second President, believes reform can be managed within the existing government. Leader of the Revolutionary Army, Jimmy Kinnear, trusts only in military intervention. However, Jacob Goodayle, Chairman of Western America’s illegal outland government, favors separatism.
As tensions rise, civil war seems imminent. Who will be the voice of reason in a world on the verge of a third dark age?

Endorsements for America II The Reformation


Linda Rondeau’s new series is a near-future tale of twisted morality and technology that begins with a clutch to the throat and won’t let go, even after the last page. ~ Lisa Lickel, author of Meander Scar


The author shows clear imagination, and it is definitely an interesting read. ~ Ian Miller, author


The author has evidently given much consideration and context to the present trends and circumstances that threaten such societies: the "Balkanization" or further fragmentation of the America's and other areas of the globe; pandemic viruses and cataclysmic natural events; centralized regimes and tyrannical rule; euthanasia and population control; mass-media programming and propaganda; conflicts and war….five stars! ~H. Kirk Rainer, author


In America II: The Reformation, L. W. Rondeau creates a story world I want to explore and characters I want to know. Rondeau addresses controversial issues our world faces now and will face in the future. She crafts a story worth reading.~ T. Tarver, author of Dark Eyes, Deep Eyes


A futuristic fast-paced tale, America II: The Reformation, will keep you on the edge of your seat. L.W. Rondeau knows how to grip the human heart. ~ Alice J. Wisler, author of Rain Song, Still Life in Shadows, and three other novels


A sweeping drama! Rondeau skillfully creates a realistic society on the brink of revolution in the not-too-distant future. Hope, fear, love, faith--the passions of her complex characters draw you into their intricate political intrigue until their causes become your causes. ~Suzanne Hartmann, author of Peril, the first in the Fast Track Thriller series

An electronic version of America II The Reformation can be purchased at Amazon.com & Barnes and Noble (print edition coming soon!)

Well friends, hope you've enjoyed this edition of Saturday Spotlight. Be sure and check back often for other great spotlights and blog tours!