Nothing spooky going on here on our blog....only GREAT news! In case you haven't noticed the sidebar....two great things. First a rafflecopter contest to win a Kindle Fire and notification that Keri's Christmas Wish is a finalist in OKRWA's 2017 IDA contest!

Although today's guest was mentioned on the blog several years ago, he is actually new to being featured and to many of you here. 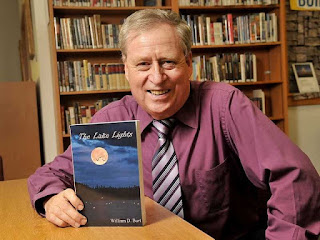 William D. Burt is the award-winning author of the seven-title Christian allegorical “King of the Trees” series. Two of his titles (out of three submitted) were finalists in the 2014 Readers’ Favorite International Book Award Contest: “The King of the Trees” and “The Golden Wood.”

Volume I in his new Creation Seekers series, “The Lake Lights” is William Burt’s first foray into the realm of science fiction. The plot deals with the investigation of an unusual lake phenomenon in Oregon as well as the discovery of a world-changing invention that helps prevent a nuclear disaster.
As an Assistant Professor in the Special Education Department at Western Oregon University, Burt served as a successful grant-writer and program coordinator. He holds a B.S. in English from Lewis and Clark College and an M.S. from Western Oregon University in Deaf Education. Burt has been an RID-certified sign-language interpreter with over forty years’ experience. His interests include reading, foreign languages and mycology. He is married with two grown children and two grandchildren. 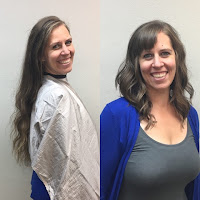 Although I treasure my wife and son, at the moment, my daughter (pictured) is a special blessing to us all. She spent eight years teaching kindergarten but has always wanted children of her own. After three early-term miscarriages (one of which nearly killed her), she was told that her uterus is malformed and that she would never be able to carry a child to term. Determined to prove her doctor wrong, she is now pregnant again and in her tenth week (as of 9/16)—this time without complications. In the photo, my daughter has just had her hair cut after letting it grow for about four years to fulfill a vow. She had told God she wouldn’t cut her hair until she could have a child. Since only 3-5% of pregnancies at this stage end in miscarriage, she decided the time had come to donate her locks to a worthy cause.

OH Wow, William, how wonderful! Keep us posted on that baby and give your daughter a hug for us.

Until next time, take care and God bless.
PamT
Posted by Pamela S Thibodeaux at 7:22 AM

Nice to meet you, William, and congratulations on your daughter's pregnancy. I pray all will go well for her.

Wishing your daughter a healthy pregnancy. I also had miscarriages and went on to give birth to two healthy sons.

Thank you, everyone, for your well-wishes regarding my daughter. It's nice to be back on Pam's blog, by the way! An update: My daughter is now about 16 weeks along and is still going strong. All the signs point toward a successful, full-term pregnancy. We are all very excited.

On another note, I received a 5-star review of "The Lake Lights" yesterday from Readers' Favorite. That makes my eighth 5-star review from Readers' Favorite, one for each of my eight novels. I should add that if you are personally interested in Creation Science (or want to introduce your pre-teens/teens to honest science that confirms Biblical truths), then "The Lake Lights" is a great place to start. Those truths are woven right into the story—as they will be in the second volume in the Creation Seekers series.

Also, my best bargain is the 7-title set price of $70 (on my website) for the "King of the Trees" Christian allegorical fantasy series. This autographed set makes a great Christmas gift for readers young and not-so-young (ages 8 and up) and comes with a free, 58-page Activity Book PDF for homeschoolers and others. All seven of those titles feature a glossary/pronunciation guide at the back for easier reading and/or reading aloud.

I pray your readers will be drawn into your stories and be touched by God's goodness and truth. Cheers

Oh my gosh, you must be so proud of your daughter and feeling so blessed. Sending prayers that she has a healthy, happy baby. Congrats, Pamela!!

Thank you, Alicia. Yes, we're proud of our daughter for not giving up. She's a fighter. Thanks for your prayers, too. There are still six months before the baby is born, so we're not taking anything for granted.