Last month I introduced you to a brand new to me author, Mike Befeler, who shared with us how he treasures GeezerLit Mysteries.

Today Mike is sharing more thoughts on this subject.....

I enjoy writing and reading geezer-lit mysteries. These are books that feature older characters. Since many readers are older, they also like reading about older people and not just young ‘uns. My six book Paul Jacobson Geezer-lit Mystery Series and my most recent book, Death of a Scam Artist, are geezer-lit.

I use geezer-lit in an affectionate not derogatory manner and use it to include both geezers and geezerettes.

There are many outstanding examples of geezer-lit mysteries. One of the most famous examples, of course, is Agatha Christie’s Miss Marple. Everyone assumed that this little old lady couldn’t be that with it, and she always proved them wrong.

One of my favorite contemporary geezer-lit mystery protagonists is Gladdy Gold in Rita Lakin’s series that takes place in Florida. Gladdy and her gang of older people solve mysteries while getting into all kinds of trouble. Since I write humor, I also appreciate Rita’s sense of humor.
Another example of humorous geezer-lit is Parnell Hall’s Puzzle Lady Series featuring Cora Felton, an older gun-toting, ball of fire. Cora has a gig writing crossword puzzles, although she really can’t write them.

This will get you started with some wonderful older characters in geezer-lit mysteries. 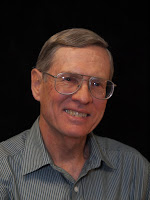 Mike is past-president of the Rocky Mountain Chapter of Mystery Writers of America. He holds a Master’s degree from UCLA and a Bachelor’s degree from Stanford. He grew up in Honolulu, Hawaii, and now lives in Lakewood, California with his wife, Wendy.

Find out more about Mike by visiting the 'About' page on his website and connecting with him at the following locations:

Friends, you can pick up a copy of Mike's book at Amazon (Kindle) and B&N.

Hope you enjoyed today's thoughts about GeezerLit books, and that you'll join me each week for Tuesday Treasures, Thursday Thoughts and Saturday Spotlight.

Until next time, take care and God bless.
PamT
Posted by Pamela S Thibodeaux at 6:49 AM

I enjoy geezer lit. Older people have a lifetime of wisdom to offer.

lol, that's the first time I heard about "geezer lit". Enjoyed your post!

Jacqueline and Maureen,
Thanks for your comments. Your comment about wisdom is right on. I often refer to older people as POWs, not prisoners of war, but Persons Of Wisdom.

I just love this! Thank you so much for writing characters like these!

Geezer lit absolutely has a place! We Baby-Boomers have a lot of years left in us.

Thanks, Mike for the kind words. Still writing my Getting Old is Murder Gladdy Gold mysteries. They're so much fun to write.

And yours are fun to read.
Rita Lakin

I appreciate the comments, Kara, Sorchia and Rita. As Rita says, it's a joy to write mysteries with older characters