I hope you're staying as warm as possible today. It's C-O-L-D out there this morning with a high in the 50's....bbbrrrr...too cold for my blood!

As you may know I am the Co-Founder of Bayou Writers Group in Lake Charles, Louisiana so it is always a pleasure and an honor to introduce you to one of our members, Mark Wayne Allen!


How did the sun come up this morning? I don't know. Where did the universe come from? I don't know. We seem to put great trust in the things we don't know. We might understand the science of reality, but do we really know anything about the existence of the world?
I can see some scientist holding a hand to his mouth to hide his smirking. I feel for him. He, or she, thinks everything can be calculated with a computer. Obviously they've never fell into romantic love for a person of the opposite sex.
It's that unexplainable attraction to someone that makes for much literature. From Shakespeare's Romeo and Juliet to Sleepless In Seattle, history is full of stories of all types love. An entire mystic culture surrounds the subject of love. There's love of animals, idols, music, art, and millions more things, but yet some of us think that, given a slide rule and time, everything can be quantified.
I say we should embrace the things that we don't know. Love, friendship, a sunny day, and lay around with our fellow human beings, pets, etc., and look up at the stars. Appreciate what can't be explained or enumerated. Life happens and time goes by. We shouldn't let any part of any day not be appreciated, enjoyed, or fulfilled. Let's be thankful for the things we don't understand for they are where our joy comes from.

Definitely something to think about Mark! 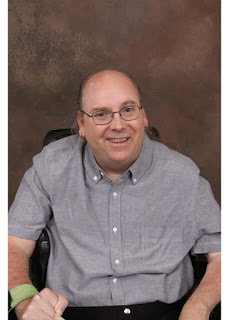 Mark Wayne Allen was born in Merryvillle, Louisiana where he now resides, but has lived in many states. Due to life tragedies, he is a quadriplegic.
A love of books inspired him to write down his own stories, which, over the years, has evolved to include all categories. From poetry to short stories to novels, his knowledge of the craft grew over time, and so did his love for it.
He wrote two short stories and several poems that were published in a short-lived e-zine called Dementia. In 2013, he published the science fiction book Star Siege which was written during his years at Louisiana State University. Since then, he has placed in several contests since and even had a first place poem. He writes regularly for The Voice Of Southwest Louisiana Magazine.

Having lived in the North, South, East, and West has given him the opportunity to talk with a diverse group of people as well as an appreciation for different cultures. Currently, he lives with his wife of many years, Kelley, and is an active part of the community. You can keep up with Mark through his Website, Facebook and Twitter.


Mark's brand new book, 3 Lifetimes in 1 is available through Amazon in Paperback and on Kindle!

Until next time, take care and God Bless!
PamT
Posted by Pamela S Thibodeaux at 5:58 AM

What a beautiful, inspiring post. Definitely words to live by. I have great respect for you and your journey. Congrats on the success with your publishing!

Mark, what a joyful insight you've given us. Thank you for making my day a little brighter. My best to you on your new book, hope it does well. Cheers

It is wonderful that you can participate in something as uplifting and important as writing in spite of life's tragedies. Best wishes in all your endeavors.

Thanks Ladies for stopping by...I'm sure Mark will be around when he gets a chance.

Have a Blessed day!
PamT

You always invite interesting guests! Mark's attitude is uplifting and I enjoyed reading this post. Best wishes for the success of your book.

Sorry for my delay folks I had to take care of an older woman. All great comment. I am constantly overwhelmed by the wonderful kind and gentle spirit of all.Susan, life may be filledwith tragedy, but that doesn't mean we must succumb to them. We must press onnot in good faith and growing stronger.

The journey may be long, but it's perseverance through it all that defines us. I wonder how many of us really take notice of the daily miracles that happen all around us?

Sorry for my delay folks I had to take care of an older woman. All great comment. I am constantly overwhelmed by the wonderful kind and gentle spirit of all.Susan, life may be filledwith tragedy, but that doesn't mean we must succumb to them. We must press onnot in good faith and growing stronger.

If everything in life was explainable, it wouldn't leave much to discuss, would it? How boring! When things are undefinable we can weigh in with our beliefs about them and listen to what others have to say about it and really think. Interesting post! Thanks for sharing it with us! Best wishes for your new release!