This may be a subject that's better for Thursday Thoughts than Tuesday Treasures, but here goes anyway....

There's an old saying that "silence is golden" why do you suppose that's true?

Is it even true?

Have you ever sat in silence and wondered at the noise that infiltrates our lives?

Have you ever sat in silence and listened to the craziness of your own thoughts?

I remember a story from one of Wayne Dyer's books about a boy whose father sent him to a special camp every summer and at that camp they practiced silence. They could not speak to one another and those who did had to leave. The point of the entire camp was to prove that we're all connected and that we can communicate with each other without words.

It was a fascinating story but have you ever tried to practice silence?

Dr. Dyer also talks about a quote by Rumi which says.... The morning breezes have secrets to tell you, don't go back to sleep!

The bible teaches us that God speaks in a "still, small voice."

Granted sometimes He speaks in a very audible one, but we are also instructed to "be still and know"....

How else can you hear the secrets whispered in the morning breezes or the still, small voice of God unless you are silent?

Often when I'm travelling I do so in absolute silence. Maybe not the whole trip but for long stretches of time. It's one way I reconnect with myself...my soul, and God. 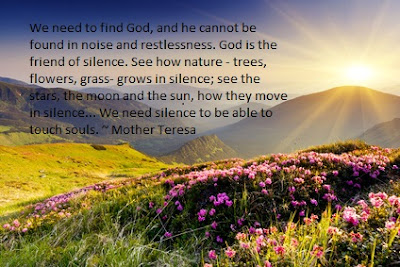 Here's another thought....how many times does simple acknowledgement possibly accompanied by a hug say more to us than words ever can?

Here's a novel idea.... next time you're alone, instead of turning on the television or radio or picking up the phone, take some time to sit in silence. Take deep breaths and let all the chatter in your brain just fade away and then notice what you actually hear in the silence.

Who knows, it may be the answer to whatever is ailing you at the moment!

Any time you can grab a moment (or several) of silence in the midst of normal chaos is certainly something to treasure.

Something to think about....
"Inspirational with an Edge!" ™


Posted by Pamela S Thibodeaux at 9:21 AM
Email ThisBlogThis!Share to TwitterShare to FacebookShare to Pinterest
Labels: inspirational with an edge, mother theresa, pamela s thibodeaux, silence, something to think about, spiritual growth, spiritual health, spiritual living

I do like silence in the early morning. Many of my most creative ideas come to me then.

Good piece on silence. Only in silence can I hear the world around me and the world inside. In silence I can let solutions appear and problems find solutions. Silence and stillness.

I can't agree enough! I need some silence everyday to quiet my mind.

I love the silence. I never have the tv or music on. When my grandsons were babies, I refused to buy them toys that made noise. Even the blocks and toy broom sang. These days, I get the most comfort and inspiration at sunset when I'm at the hose rescue feeding them. Perfect. Peaceful. Love to all...

Thank you so much for sharing these important thoughts.
Silence is so good for my soul; it's nice to know others feel the same.
Best
Veronica Lynch

Well said. There is much to learn about yourself and how you handle silence. Sometimes we need to let ourselves rest from the chaotic life around us and just reflect, create, dream, pray. . .or simply clear our minds.

Funny, last night when I was praying for something particular, an old song came to mind..."and the words of the prophets are written on the subway walls and tenement halls, and whispered in the sounds...of silence". Silence is golden...most especially God's whispered words to us.

Our world isn't built to promote silence. It's a learned art, and Jesus practiced it in the garden of prayer. In past centuries, silence wasn't quite as foreign to us as it is now. I'm glad to see others recognize it as valuable, too. Cheers

And it is interesting how we vary in our need for silence. My husband likes more noise than I do, so he often wears headphones. That can irritate me, too, though, because he often won't hear what I tell him. He is legally blind, though, so I wonder if that plays into it. He can't be visually stimulated in the same way, so audio fills the gaps. Like you, I often log miles of traveling in silence. This is where a lot of my book ideas come from. Bad thing is, I can't write down the thoughts I'm having because I'm driving. I have to rely on my memory, which often fails me. Another point to be made is that if we fill the world with noise we can't listen to what it is saying to us. SILENT = LISTEN Thanks for sharing your thoughts. 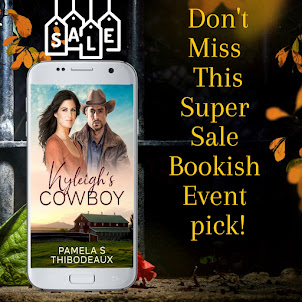