Good Morning and a cold one it is out there!

A lot of folks are experiencing below freezing weather. I'm sorry it's them but glad it's not me LOL!

IMO, anything below 70 is freezing.

Anyway it's perfect weather to curl up with a good book and with that in mind, I'm pleased to shine the spotlight on Dana Pratola with her release, Voice of Truth..... 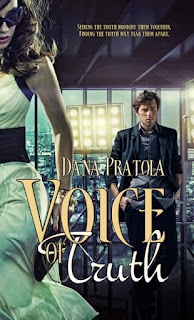 
Sophia Gallo is celebrated and adored by millions, but in her meteoric rise to fame, it might appear she’s forgotten the One Who gave her the gift that made possible her life of wealth and glory. She hasn’t forgotten. She’s reminded every day as she endeavors to hide a secret that could change everything and expose her as the freak and outcast she always thought herself to be.

Cade Fioretti has never backed down from finding the truth, and he’s not about to start now. Its his job and his passion. Sophia is beautiful, talented, and the subject of his next book; but she’s hiding something. No matter what it takes, he’s going to dig it up, and in the process learn all there is to know about this woman who’s stolen his heart.

Excerpt: Half way through the song, he leaned over and took the remote from Sophia’s hand, clicked PAUSE.
“OK, so the rumors are true,” he chuckled. “You weren’t born with those pipes. What happened?”
Sophia sighed and walked into the kitchen, taking a seat at the table. He followed, taking one beside her, resting his elbow on the hard wood surface with his pointer and middle fingers against his temple, his thumb under his chin.
“I was in the car driving to work, listening to the radio, singing along, and it just kind of…came out,” she began. “At first I thought I scalded my vocal chords or something. I know it sounds ridiculous, but...”
She paused, waiting for him to chuckle, no doubt, but he listened intently.
“I couldn’t explain, it, I freaked out a little,” she said with a nervous laugh.
He didn’t blame her. All of a sudden she could sing? The media would love that. “You told others about this?”
“Only Anthony. He thought I might have a head injury.” Neither spoke for dragged out seconds. “Not knowing how it happened was weird, but not as mind blowing as knowing how it happened.”
Cade leaned forward. “How?”
She sighed. “Well, I went over everything I’d done as far back as I could remember. At least, since the last time I’d tried to sing anything. I came up empty. Until I realized that at church the Sunday before, I asked for it.”
“You asked for it?”
“I remembered singing a worship song, and there’s a part where it goes...”
Goose flesh broke out on Cade’s arms as she sang the words.
“I give all to You, Lord, to praise, to honor, to magnify Your Name. I felt those words right to my core.”
So had Cade, and he shifted in his seat.
“I wanted, more than anything, to bring Him praise with my voice.” She laughed then. “I didn’t care whether anyone else enjoyed it, as long as He did.”
“But, they all heard the change,” he said.
Sophia shook her head. “No, not then. Mrs. O’Leary, who always sat in front of me, cringed through the rest of praise and worship like always. And I didn’t think any more about it. I didn’t have any kind of feeling or hear a voice from heaven. Nothing.”
“So, when did you know you had a voice?”
“Not for a few days, a Wednesday actually. I remember because I wanted to test it out on other people, so I went to Wednesday night service and slid in behind Mrs. O’Leary.”
He smiled broadly. “What happened?”
“Well, I got her attention, that’s for sure.” Sophia smiled back. “She turned all the way around and said, ‘well, bless the Lord.’ I got the impression she might have been praying, too.”
Cade laughed with her until their eyes watered.
“So why the cover-up?” Cade asked.
The words were like a splash of cold water and Sophia went rigid.
“And does this have anything to do with your quitting? Has someone been blackmailing you? Is that what all this is about?”
“No.” Sophia picked at her nails. “And it’s not a cover-up. I always gave God the glory for my voice. I still do.”
Cade narrowed his eyes. “You’re doing that thing again where you only give half the information but present it as a whole story. You might not be hiding your light under a bushel, but you’re definitely hiding the Match.”
She hung her head, unable to deny it, but hoping he would back off.
“OK, so you’ve decided to omit some facts. I get it,” Cade said with a sideways tilt of his head. Her eyes turned to his. “Anyone who’s heard you sing knows it’s a gift. It’s just the manner in which it was imparted, right? You want to leave out the miraculous, insta-zap part. Tell me why.”
She sniffled, wrung her hands. “You saw it yourself,” she answered, with a lift of her chin toward the living room. “Unnatural…once a freak, always a freak.”

What folks are saying about The Voice of Truth...

★★★★★ VOICE OF TRUTH  ★★★★★ “This is by far one of Dana Pratola's most amazing books! Immediately from the start, you're captivated by Sophia & the mystery behind her beauty and melting voice. Although Sophia is interesting on her own, Cade is the real show stealer with his curiosity and swoon worthy way of dealing with his emotions for Sophia! Overall, this book is a great read for those who love to lose themselves in a great romantic story!! I really hope there's a sequel to this as Cade and Sophia are the cutest things ever! Check it out!!”

Voice of Truth can be purchased at Pelican Book Group and Amazon. 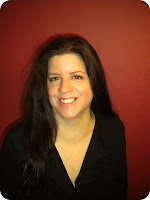 God gave me a passion to write Christian Romance. These books don’t contain explicit sex scenes, but my characters have real desires, struggles and choices to make. A lot of the time they make the wrong ones. No subject is prohibited but good always triumphs and God is glorified. In my personal life, He has also blessed me with a wonderful husband and three dynamic children, all of whom are destined to make wide, colorful splashes in this world. We share our New Jersey home with three dogs. I have no hobbies to speak of, unless you include writing. I don’t.

Find out more about Dana by visiting her website.

Hope you enjoyed the spotlight. Check back each week for more Tuesday Treasures, Thursday Thoughts and Saturday Spotlight!

Until next time...take care and God bless.
PamT
Posted by Pamela S Thibodeaux at 8:22 AM

Sounds like a fantastic book. Thank you, Pam and Dana

As a former church choir member who is definitely NOT soloist category, I can relate to the desire for that beautiful, pure voice. Intriguing post and excerpt!

I love your books, Dana. This one sounds great!

Congrats from another Jersey girl! Wishing you much success with your writing.

Sounds like an interesting read! You did a good job of choosing your excerpt. It makes you sympathize with your heroine, feel drawn to your hero, and leaves you curious. Best wishes for you and THE VOICE OF TRUTH. Was it inspired by the Casting Crowns song?

I was immediately interested in the excerpt since my hubs has a marvelous bass voice and sings in 5 different groups (including church choir) and, though I play piano and read notes, I can barely croak out the tune. Neat conflict set up! Good luck.

Your excerpt really hooked me, Dana. I am eager to read Voice of Truth. The title itself is intriguing. Congratulations! Hugs...

Thanks so much, everyone. Where in Jersey are you, Jacqueline? Enjoying the snow? No, M.J., not inspired by Casting Crowns song, though I LOVE that song :)