Good Morning Friends and Welcome to another feature in the #RockingSummerRomance Blog hop!

Back in April I hosted author Linda McLaughlin (AKA: Lindi Lamont) with her novel, Lady Ellinor's Escape, during the Egg-cerpt Exchange Blog hop, well today it is my pleasure to bring you another book by this multi-talented author!

But first, a little about Linda/Lindi....

Now some fun Q&A with Linda/Lindi....

Q: Which comes first, characters or plot?
A: Characters, always.

Q: Among those that you’ve written, which is your favorite book and why?
A: Rogue’s Hostage is my favorite. It’s the most personal, in a couple of ways. The first half is set in the area of Pittsburgh, PA., my home town. It’s also the book I was writing when my mother died, and when I finished, I realized that the heroine, Mara, is much like my mother. I just wish she had lived long enough to read the book.

Q: Have your characters ever taken over the story and moved it in a direction totally different than you had in mind? What did you do?
A: Sometimes that happens, and sometimes it’s a good thing. If not, I have to rein them in. Most often it’s one of the secondary characters trying to take over the book.

Q: Do you have a "must have" book for writing?
A: Every book requires different research, but my baby name books are always needed. I especially like the ones that include historical and ethnic background information. 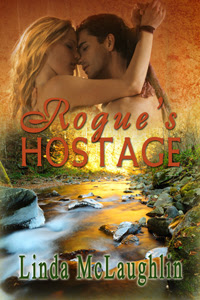 Blurb: His hostage... In 1758 the Pennsylvania frontier is wild, primitive and dangerous, where safety often lies at the end of a gun. Mara Dupré's life crumbles when a French and Indian war party attacks her cabin, kills her husband, and takes her captive. Marching through the wilderness strengthens her resolve to flee, but she doesn't count on her captor teaching her the meaning of courage and the tempting call of desire. Her destiny... French lieutenant Jacques Corbeau's desire for his captive threatens what little honor he has left. But when Mara desperately offers herself to him in exchange for her freedom, he finds the strength to refuse and reclaims his lost self-respect. As the shadows of his past catch up to him, Jacques realizes that Mara, despite the odds, is the one true key to reclaiming his soul and banishing his past misdeeds forever. (Previously published by Amber Quill Press)

Excerpt: Holding the towel to his shoulder, he walked over and stood by the bed to check on the woman, who was still in a faint. Despite her pallor, he noted that her skin was fine, her nose straight and thin. She had a lower lip just full enough to entice a man to taste it, and a stubborn chin that dared him to try. Under different circumstances….

She was perhaps not as lovely as he’d thought when he first saw her standing in the clearing—her hair, the color of corn silk, shining in the sunlight. Still, she was tall and fair, with slender curves and shapely ankles visible beneath the short skirts of a farm wife. .

And now she was a widow. He stared down at the woman and silently vowed to see that no more innocents died today. .

The woman gave a soft moan and opened her eyes. When she spotted him, she shrank back against the wall, arms folded defensively across her breast. His gut tightened. He didn’t enjoy terrifying women, but fear should make her easier to control. She had already proven unpredictable. .

Terror, stark and vivid, glittered in her eyes. "Who are you?"

"My name is Jacques Corbeau, lieutenant in the army of France. And you are my captive."

Mara inhaled sharply, panic building inside her. This couldn’t be real. It was all a bad dream. She would wake up soon and tell Emile about it, and they would laugh. And laugh and laugh and…. She swallowed the hysteria engulfing her.

"Madame, are you listening to me?"

The Frenchman’s voice, sharp and insistent, demanded her attention. "There is not much time. My companions are not patient men. We must leave soon, but first I want you to bind my shoulder. Where do you keep bandages?"

Her mouth and throat were dry when she swallowed, but she choked out an answer. "The trunk. Under the bed."

He squatted beside the bed, pulled out the trunk and rummaged through it. She watched his every move, unable to take her eyes off him, alarmed by the physical threat he represented.

He was a tall man who dominated the cabin as Emile never had, and his state of undress revealed nearly every inch of his lean and powerful form. Not only was he bare to the waist, but his breechclout and leggings failed to completely cover his thighs and buttocks. He had a wide-shouldered, rangy body and long, sinewy legs. He looked strong, virile, and infinitely dangerous.

A cold knot formed in Mara’s stomach. The French had killed her father and now her husband. What would they do to her?

She wrapped her arms around her waist. Her grandfather would say whatever happened was God’s will, but she rejected that idea. What kind of God allowed such awful things to happen?

Fearfully, she watched as the Frenchman shoved the trunk back under the bed and stood. He held out the bandages, and she froze. She couldn’t touch him, she just couldn’t.

The man’s heavy black brows drew together in a fierce frown, but his voice was without emotion. "Madame, I am all that stands between you and the men who killed your husband. I can be persuaded to act as your protector. It is to your advantage to do what I command."

Well Friends, hope you enjoyed this Rocking Summer Romance spotlight. Stay tuned next week for another on Tuesday Treasure then of course, check back for Thursday Thoughts and Saturday Spotlight!

Until next time.... Take care & God Bless!
PamT
Posted by Pamela S Thibodeaux at 2:30 AM