I apologize for no Thursday Thoughts, I was too busy to think much less write. This morning I welcome Mr. Jerome Brooke, AKA Joan Barron to the spotlight...... 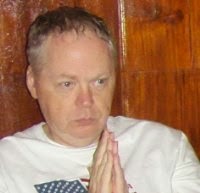 Jerome Brooke lives in the Kingdom of Siam. He is the consort of Jira, a princess of the lost Kingdom of Nan. He has written The City of the Mirage and many other books.
Find out more by visiting his website and/or Facebook

Q&A
How long have you been writing F&SF?
I have lived in the Kingdom of Siam for ten years. Most of my fiction writing has been done after I came here.
What is your style and goal?
I used to read lots of pulp fiction. I adapt that to my own work. I write shorter books that can be read as ebooks. Some of them are collections. Like the Conan or Sherlock Holmes tales, they can be read as solo stories.

Do you have a series?
One of my series is Astarte and her Dark Empire. The books are set eons in the future. The Elder Race are sons of Sol III. They sailed to the stars and seeded many worlds with life. They fostered many civilizations. They founded an empire ruled by Astarte the Divine. 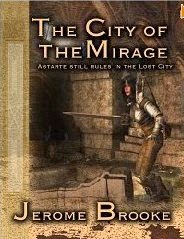 Astarte?
Astarte has lived for eons, and rules many worlds. She is not loved by her subjects. She is the Destroyer of Worlds. In my The City of the Mirage she calls the Warrior to fight at her side. She is always at war with her rivals, other members of the Elder Race.

Blurb: The City of the Mirage is ruled by the Divine Astarte. She has called the man who comes to be called the Conqueror to her service. Astarte was born on our own world. Astarte rules a vast empire of the multiverse. Her race seeded many worlds with life over the eons. The Conqueror leads her legions to victory in a war against forces led by her brother.

Is it Dark Fantasy?
Yes. I did not want to have a hero was just like the people of today, and was politically correct. I wanted people who had values and  lives that were exotic.  Astarte and her subjects are often ruled by the desire for power, and by dark passions.
What is your day job?
I am retired. I have served as City Attorney back home. I have also done rare book cataloging. I am the consort of Jira, a princess of the lost Kingdom of Nan. I have two kids.
Nan?
Nan is 1000 kilometers from Bangkok, in the remote Highlands. It was long an independent kingdom, and still has its own royal family.

What are your current projects?
I have recently started a paranormal series. The first book is The Lover of the Voodoo Priestess. I wrote the book under the name Joan Barron.
Also, The Empire of the Moon is a collection of the Histories of the Women of Darkness. The Prince of the Isles enters the circle of the Wise Women of the Goddess of the Moon. They promise him power, wealth and renown. They also call the goddess to come to his side. To her his soul is lost. Thus it was in the days of the sword.

Wow, what an impressive list! Hope you enjoyed the spotlight friends!
Have a Blessed weekend!
PamT

Posted by Pamela S Thibodeaux at 6:33 AM

Email ThisBlogThis!Share to TwitterShare to FacebookShare to Pinterest
Labels: dark fantasy, divine astarte, jerome brooke, joan barron, sci-fi, the city of mirage, the empire of the moon, the lover of the voodoo priestess