Good Morning Friends!
Today is my Angel Girl's birthday - she is SIX years old! Seems like just yesterday she was cuddled up on her Paw Paw's chest and they were both sound asleep in the recliner! 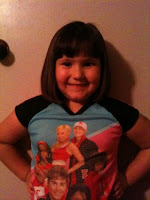 My how time flies.

Today's Saturday Spotlight is on Amber Leigh Williams and her book, Bluest Heart of TWRP's Wayback Series  But first, a little about Amber.....

Amber Leigh Williams is a multi-published romance author, PRO Liaison and former Secretary of the Gulf Coast Chapter of Romance Writers of America and monthly contributor to Romance Writers United's "Write Right" newsletter. Her western romance, Blackest Heart, was the 1st Place More Than Magic Novella of 2009 and her historical romance, Forever Amore, received the top rating, "Best Book," at Long & Short Reviews. She lives on the Gulf Coast of Alabama with her husband and three labs. Learn more about her stories on the web at http://www.amberleighwilliams.com/!

The Wayback bachelor is a dying breed, but that doesn't stop Casey Ridge from wanting to settle down. For this cowboy anyone but Josie Brusky would be an easy wrangle. Unfortunately for him, the Blue Bug singer and owner of Josie's Treasures doesn't believe in commitment much less marriage.


Years ago, Josie lost her heart to Casey's charm and dimpled smile. Since then she has done everything she knows to forget him. After all, she’s known as the local harlot and the daughter of the town’s biggest bigot. Casey could have any girl he wanted. Why would he saddle himself with her? In the wake of a shattering past, she refuses to give up her independence.

Casey digs down deep to win her over, but does he have what it takes to win Wayback's bluest heart? *Anticipated sequel to Blackest Heart - 1st Place More Than Magic Novella (2009)*

Excerpt: "You remember that night behind the stable?"


She let out a small, throaty laugh. "Seems like forever ago, but yeah. Your hair was a lot longer then."

"Yours, too." He could remember it curtaining their faces, the tips of silky, red curls tickling his cheeks. Tracing the line of pearly buttons from the hem of her midnight blue blouse to the open neck-line, he touched the teardrop-shaped pearl on the thin gold chain around her neck which reminded him of the moon that night. "You were my first."

She lifted her gaze to his. Tenderness warred with uncertainty in the whiskey-colored depths. "Me, too."

His heart pattered at the memory. "I always liked that about us."

She nodded, frowning. "I was crazy about you."

The tip of his thumb traced the bottom edge of her lip. "So why didn’t it last?"

She looked beyond him, remembering. "Because however much I wanted to be with you, I knew I would be leaving the first chance I got. I wasn’t going to let anything or anyone stand in my way."

"You figured I would?"

"Casey, we were so young," she told him. "Who knows what you or I would’ve done?"

He paused, running a hand over her hair. "Just for the record," he murmured, lips brushing her cheek, "I would’ve let you go."

She sighed, reaching up to clutch his upper arm. The muscle under her hand and his sleeve warmed. "Why hasn’t anyone snatched you up yet?"

"Because you’re the only one I ever wanted, Josie," he told her, cupping her chin in his hand to look her in the eyes as he said it. "The only one."

Along with Amber's other titles, Bluest Heart is available now from The Wild Rose Press!

That wraps up another Saturday Spotlight.

See ya next week!

Mornin' Pam and Amber. Loved the excerpt, drew me right in. Sounds like another for the TBR list. Happy Saturday!

Oooh, great excerpt. There's nothing like a cowboy who loves his woman. *sigh*

Yowza, I totally love cowboy romances! Thanks for the great blog, Pam and Amber. oxoxoxox

Love the story.. Thanks.
http://www.healthymusclebuild.com

I just love a cowboy in love! Yee Hah!