Today's spotlight is on David Murdoch and his book, Ana Markovic. 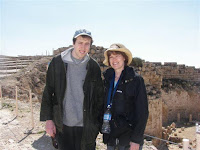 David Murdoch is a convert to Roman Catholicism and a native of Toronto, Canada. He grew up in a liberal protestant tradition that he drifted away from as a teenager and embraced catholicism when he discovered it as a young adult at Queen's University in Kingston, Ontario. He began writing Ana Markovic while he was at university and finished it soon after graduation. He wrote the book out of a need he felt to share the gifts and graces God has given him with others. He has also written a theological book called 'The Knowledge of Good and Evil' that deals with human sinfulness and judgment.


David is 23 years old, and is currently training to be a teacher. He prays and trusts in the Spirit's guidance to lead him wherever he is called to go in the life that is before him. In the photo with David is his mother and they are standing in the ruin of one of king Herod's palaces in the modern-day West Bank.

Emerging from an alcohol-poisoned sleep that should have left her dead on the streets of Toronto, Ana Markovic slowly began to remember a dream that she had while unconscious. She hadn't always been homless. Once, she had a home and a family, but she lost this as a result of alcoholism and her own misguided will. She had abandoned her family to live on the streets in a perpetual state of self-hate.


Ana no longer seemed to matter to anyone including herself, but she was not forgotten in the eyes of God. One night she had drunk herself to a point that should have killed her, but while she awaited death, St Michael the Archangel appeared to her in a dream explaining to her how important she was in the eyes of God and urging her to accept this.

A long discussion took place between the two, which was joined at times by demons, the Lord Jesus Christ and all of the saints. Through the discussion and arguments over the life of this seemingly insignificant homeless woman, there is revealed the indescribable meaning, the struggle for salvation, and the redemption God's love offers every human being.

Excerpt:
They found themselves on a hot grassland with the sun high in the air and gazelles jumping through the fields. A man was there. He was dark-skinned, with a scruffy beard of black hair on his face, and he was singing verses of a song in a language that is unknown on this earth. Annie could have mistaken him by appearance, for a member of the Somali community in Toronto except for the fact that he was completely naked.

Annie opened her mouth in disbelief, “So there really was an Adam then?”

Mick said, “Yes, and this is him. Now do you know what makes Adam different from all the other creatures in the garden?”

Annie said, “You mean he is a human?”

Annie said, “They are smart, they are intelligent?”

Mick said, “Not true. There are other animals that have intelligence, elephants have a brain that is larger than humans, and dolphins are self-aware. Besides that, a person could build a machine that is capable of doing many things that a human brain could not.”

“They make tools, they have technology?”

“Not true. Chimpanzees make and use tools, great apes use tools.”

“Look at your feet Annie” (there was an anthill next to her) “Is that not a civilization? It is an organized colony with castes, territory and social structure.”

“Humans have emotion? They smile and frown?”

“Many creatures possess emotion and use gestures to display how they are feeling.”

“Humans do evil and good. They possess free will. They know what love is.”

Mick said, “Humans are made in the image of God. Unlike all creatures upon this earth, humanity is the only kind made in God’s own image and likeness. That is why they are special. You could make a machine, a ‘cyborg’ which possessed many of the traits and abilities that a human being possessed, with enough technology and it could even surpass humanity’s weak flesh in many ways, but you could never create another creature in God’s image.”

Ana Markovic can be purchased at Amazon and has received good reviews there.
Well Friends, hope you enjoyed another edition of Saturday Spotlight!

See you next week.

Until then...take care and be BLESSED!
PamT
Posted by Pamela S Thibodeaux at 2:01 AM

Pam, Thank you for bringing David to your blog. Loved his blurb and excerpt.

David, your writing has such spiritual depth. I've no doubt it is God-inspired. Don't every forsake this gifts God has given you.

Thank you so much for your encouragement! I place my trust in God and humbly hope that he'll find some use for me.

And thank you very much Pamela for hosting me...