We've been having some beautiful weather here in SW Louisiana....cool nights and days in the 70's...PERFECT if you ask me! I'd love it if we had this year around.

I'm sure I'm not the only one who feels that way.

My scheduled guest could not be here today so I thought I'd take this time to share some exciting news with you....

Tempered Dreams is now in audio!

For those of you who are new to me and our blog, here is the blurb and an excerpt..... 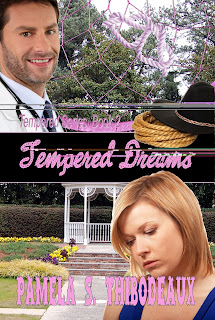 Dr. Scott Hensley (introduced in Tempered Hearts) has built a wall around his heart since the death of his wife and parents.  Katrina Simmons is recovering from scars inflicted on her as a battered wife.  Can dreams be renewed and faith strengthened?  Can they find joy and peace in God’s love and in love for one another?

Excerpt: “Spend the day with me,” he urged. “We’ll go to my place. I’ll take a short nap after which we’ll do whatever your little heart desires.”

“Anything?” she teased.
Her voice was as enticing as silk and just as alluring. Her excitement set fire to his blood. “Anything.” he assured in a thick voice.

His smoldering gaze, as tender as a caress and just as potent, lowered to her lips, lingered, then raked over her in a hungry gesture before returning to capture hers in a heated embrace. Trina felt as though he was touching her in the most intimate of ways. Her cheeks grew hot, her breath lodged in her throat. Desire washed over her in angry waves. She swallowed hard and tucked trembling hands in her lap, desperately trying to form a coherent sentence. “Please, Scott, don’t look at me like that.”

He could actually feel her trembling response across the table. His voice lowered another notch. “Like what?”

Trina shook her head. “Like you’re starving to death and could eat me up. Didn’t you have enough food?”

Pushing his plate away, Scott stood and held his hand out to her. Trina placed a trembling one in his firm grip. Pulling her gently to her feet, Scott raised it to his mouth, brushing his lips across her knuckles. “Food is not what I’m hungry for,” he informed her in a husky whisper.

Trina waited as he paid for their meal then followed him to the parking lot as gracefully as possible on legs that wobbled. He paused and in a silent gesture, signaled for her to give him her car keys. His fingers brushed sensuously over her wrist and palm, grasping hers gently when she placed them in his hand.

Locking his heated gaze with hers, Scott raised their clasped hands to his lips, this time lingering over the kiss. He nibbled on her knuckles, teasing the back of her hand with his mouth, then, in one swift movement, turned his attention to the sensitive flesh of her palm and wrist, relieving her of her keys and her senses.

Trina felt the caress to the very core of her being. She moaned, leaning against his hard frame when he pulled her closer. His heat enveloped her until she burned with him, for him. And his lips had never even touched hers.

Part of me feels guilty for not coming up with a smart, witty post for today but to tell you the truth, I'm plain wore out. Medicare AEP is 1/2 over (ends Dec. 7th) and it's been B...U....S....Y! So busy in that I had to schedule brake maintenance on my car at 7:30 this morning. I'm even working on Saturday!

Never fear though, our Saturday Spotlight will be up before I head into the office.

After it's over though, I hope to get back to posting each month and promise to do my best to share meaningful words with you - Friends.

Congrats on the audio book. I love this story! So glad it's now available to listen to. :)