#SaturdaySpotlight is on David Arp & ORB

Well hard to believe this is the last Saturday Spotlight in April 2019 - where has the time gone?

Alas, my prayer is that your year has been and continues to be filled with blessings.

David is no stranger to our blog. He's shared thoughts with us twice, been in our spotlight and given us a glimpse of what he treasures. Today he's giving us a peek into his latest release, ORB so please welcome him back.... Take it away David!

Billionaire oilman Cole Blackwell hired former Marine and Iraqi war veteran, Wes Hansen, to hunt down the man who assaulted his daughter. Wes has a name, Meshach, and one witness, a dog Wes believes the man used as a prop to walk the streets of Lubbock, Texas, at night, unquestioned. Wes’s business card reads PI, not ghost buster. To put a face to Meshach, find him and put him away, Wes will have to be both. Before the week is done, Wes and his team will be lucky to survive meeting the Man from Fire.

Bubba took a deep breath. “OK, first, I don’t believe I’ve ever heard a longer list of coincidences strung together on one case in all my life. Either you or Cole or both of you must be living right. Second, you need to bring the authorities in on this. I’m going to finish these shrimp, which won’t take another five minutes. The water is boiling. Then, I’m going to make a phone call. I’ve got an FBI agent in mind.”

“What are we looking at, Monday?”

“Oh, no, tomorrow, a meeting bright and early in the morning in New Orleans. The sooner the better because if Risa or I didn’t warn Meshach, and we didn’t, I can promise you that whoever did has access to some high level databases.” Bubba turned his attention back to the steaming pot on the stove.

Wes had made the right decision being open with Bubba. His friend was in the clear, but he felt a sense of foreboding instead of relief.

Who could monitor private web exchanges, phone calls and e-mails, find out who looked for whom, and pinpoint their location right down to the hotel they stayed in? He answered the question as quickly as it formed. Only four agencies he could think of had the ability: the Department of Homeland Security, the NSA, the CIA, and the people Bubba wanted Wes to meet with in the morning.

ORB is available from Pelican Book Group and Amazon. 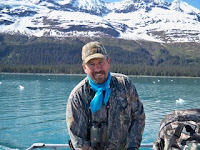 David Arp was born in Arizona, raised in Texas, and lives in Colorado with his wife of 32 years. He’s 61, but has only spent half of the past 40 years at home. The other half he traveled and worked the oilfields of the world, from the deserts of the Middle East to the vast oceans offshore. He has three children and six grandchildren.

Find out more about David and his writing by visiting his website and connecting with him on FaceBook. And check out his YA novel, Me and Jake written under the pseudonym Boo Riley available now from Pelican Book Group and Amazon in Ebook and Print!

Hope you enjoyed today's spotlight and that you'll visit often to see what's happening on our blog!

Love the excerpt and the premise. Sounds like a great book. Best wishes!

Your background and experience surely brings a lot of authenticity to this story! Best of luck with the book!

I'm a little late thanking everyone for their comments, but here I am. Thanks and blessings to all.

Your book sounds great! I really enjoyed reading the post and learning more about you.

Kara and Jacqueline, thanks for kind comments and taking the time. Blessings

Great excerpt! Sounds like a great read. Congrats on your success.

Carole and Erin, Thanks for taking the time to leave a note. Blessing.
Dave

Pamela,
Thanks for having me on again. Blessings
Dave