#SaturdaySpotlight is on Kenneth Gordon and Dark City

Today I welcome another new-to-me author to the blog brought to you by Class Act Books.... 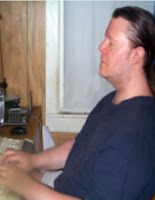 Learn more about Ken at: 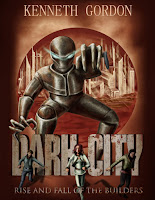 What does it mean to be human? How can we explain evil in the world? What if an AI confronts you about a flaw in your programming?

Join Jeremiah Xidorn as he is taken from the world he thinks he knows into a place of decision. Will he side with his captors; will he fight back? Delve into these and other questions…

“I’ve been promoted. I am now in my boss’ position.” Joe flailed his arms with glee.

“That’s great. Congratulations!” they all said in unison.

“I don’t know. He just left. An appointment I guess,” Sarah responded.

“The ’droids are settin’ things up, so I’ll stay out of their hair for a bit.” Something was off, but he couldn’t pin it down. “I’ll find him,” he told himself and bolted for his new office.

The androids had done their work quicker than expected, and Jeremiah’s office was quiet when he got there. He had to use the scanner to get in. Immediately, he was taken aback. On his desk were pictures of his family that he didn’t put there. Setting that thought aside for the moment, he jacked into the phone system and sent the sequence to dial.

He called Joe’s office. No answer. A moment later, he called the central office to see if Joe could be located.

The automated attendant replied, “We are sorry, that person is no longer employed at this company.”
A sense of panic raised the hair on the back of his neck. Immediately, he ran with every ounce of strength to his friend’s office. It was empty. No trace that Joe worked there or had ever worked there was found. It was swept clean.

“Maybe I went to the wrong place,” he thought. “All these offices look the same.”

To his own chagrin, he knew too well the location of his friend’s office. The paranoia built to a steady state when, upon finding his other compatriots, they had no knowledge

that Joe had ever been part of their group. Jeremiah’s heart sank. He even checked the payroll office and no trace of his friend could be found.

There was no mistake. Joe had been intentionally erased.

Hope you enjoyed today's post and that you'll check back weekly to see what (if anything) is happening on Tuesday Treasures, Thursday Thoughts and Saturday Spotlight!

What a great cover for that story! Best of luck with the book.

The book sounds intriguing! Evil exists in the world. Horror fiction tries to help us comprehend it. Best wishes for the success of your novel.

Sounds like quite a dilemma! Humans have so many flaws!!! Sounds like a great idea for a story. Good luck!

Oooohhh, intriguing. I can't wait to read. Thanks for sharing.