Welcome to another episode of Saturday Spotlight where you get a sneak peek into an author and his/her book!

Brought to you today from Class Act Books is author, Sherry Derr-Wille with her book, Mistaken Identity..... 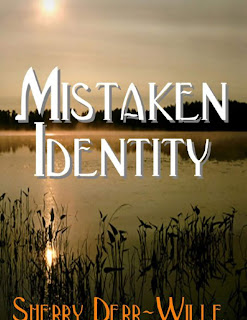 A secluded cottage on a lake in Wisconsin sounds like the perfect spot to get away from everything—or is it?


Katelyn Devereaux needs a vacation. More than a vacation, she needs to put Denver behind her as well as the man who wants her as his wife and the birth family who is insisting on finding her.

Seth Miller knows the reason that he mistook Katelyn for Genean is his knowledge that his best friend’s wife was adopted by strangers at birth. Of course he can’t change the facts that Genean and Katelyn are sisters, especially after he learns that the company she wants to visit in Wisconsin is owned by Genean’s brother, Randy, and her husband, Brad.

Sunlight shimmered across the lake and it glistened as though it had been scattered with diamonds. As she stood there in awe, taking in the beauty from the cottage, the dock invited her into the picture of beauty. Taking her sketch pad and pencil with her, Katelyn Devereaux walked across the lawn and sandy beach until she reached the pier. Settling into the deck chair, she gazed out across the water.

It was such a beautiful morning. She was so glad she’d taken the advice of her friends and accompanied Suzie Branch to this secluded Wisconsin lake. She certainly needed a vacation and could think of no place more relaxing than this quaint cottage hidden away in a different world.

In the distance a loon called to its mate, waited for a few moments for a reply and called again. This was the kind of peaceful exchange she had not taken the time to listen for in months. She knew nature was all around her back home, but there never seemed to be time to sit and listen for it. In Denver she was nothing more than a machine pumping out sketches for her clients, and on occasion, playing the gracious hostess for Martin.

No, I don’t want to think of the daily grind of running the Devereaux Agency, nor Martin Collier’s marriage proposal. I need this time to figure out just who Katelyn Devereaux really is.

Katelyn turned away from the peaceful scene before her. Why can’t my life be this peaceful?

You know why, Katie. The sound of her father’s voice within her head caused a tear to escape from the corner of her eyes. She’d lost both of her parents at Thanksgiving and never really gotten over their deaths. The only thing that kept her from going completely over the edge was work, work and more work.

I don’t think I can do this, Daddy. I don’t love Martin. I haven’t even given him an answer concerning his proposal. Maybe I’m not cut out for the wife thing. Even if I did marry Martin, I wouldn’t be a wife, not in the conventional way. With him gone so much, life as his wife would be no different than life by myself.

Katelyn’s thoughts came as a shock. Never before had she admitted her true feeling for Martin. More than anything else in the world, she wanted to be a little girl again without all the problems of being a responsible adult. Back home in Denver, her life had become too complicated to allow her to rest. For the past eight months she’d been running the Devereaux Advertising Agency, and then there was Martin Collier’s marriage proposal. The fact she had just learned of the fact she was adopted, only added to the crazy quilt her life had become over the past few months. Perhaps if her parents had told her the truth the shock wouldn’t have been so profound but they hadn’t. She’d learned of her adoption only days after their funeral.

Sounds intriguing don'tcha think?! Mistaken Identity has a heat rating of 1 meaning "sweet" and can be purchased at Class Act Books, Amazon, B&N and Smashwords.

Sherry lives in a mid-sized Southern Wisconsin with her husband of 46 years, Bob, whom she deems a saint for putting up with a crazy writer.

With three children, seven grandchildren, more book signings than she can sometimes handle, she puts out four to five books a year and loves writing in her hot pink office.

Find more information about Sherry at: her Blog: www.derr-wille.blogspot.com

Hope you enjoyed today's post and that you'll check back regularly for Tuesday Treasures, Thursday Thoughts and Saturday Spotlight!

Until next time take care and God bless.
PamT

Posted by Pamela S Thibodeaux at 3:00 AM

Wow, alot going on in this story. Sounds amazing:) Wish I was at that beautifully described lake right now.

Thank you Jody. I love creating my characters and bringing them to life.

Sounds like a great read. I wonder what she will do with Martin's marriage proposal?????

Four to five books a year? She's a dynamo!

Sounds like a fascinating novel. Congrats and best wishes!

A peaceful setting and an intriguing
beginning! Great job.

This IS intriguing.
Spent some time in northwest Wisconsin in the 80s, in a lake area. Beautiful and remote.

Thanks for sharing, Sherry. What an intriguing premise!