#SaturdaySpotlight is on Star Spangled Suspense!

Today's guest was unable to make it but never fear, I've got a very special spotlight for you!

Over the past several months, I've been involved with other authors to bring you collections of Christian suspense novels at only 99cents.

Today I'm proud and happy to share with your our latest...... Star Spangled Suspense which includes my very own Circles of Fate! 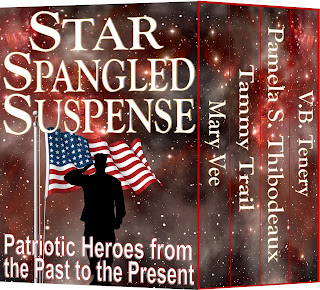 Here are the details....

Exciting Tales of Patriotic Heroes from the Past to the PresentDEATHWATCH by V. B. TeneryFinding a killer in the middle of a blitz is murder.
When a cryptanalyst in Britain’s top-secret Code and Cypher School is murdered, alarms sound in the highest echelons of Parliament. Was it merely a lover’s quarrel that ended her life, or was she killed after telling the Germans everything they wanted to know? That’s what MI6 Agent, Commander Grey Hamilton must find out.
He is joined in the chase by an old university friend from Scotland Yard, and a young American genius who has been singled out by the killer as his next victim.
As the Luftwaffe escalates its reign of terror over London, the unlikely team dodges bombs while searching the Underground and London docks knowing failure is not an option. The lives of English soldiers and perhaps the fate of the British Empire itself, is at stake. CIRCLES OF FATE by Pamela ThibodeauxSet at the tail end of the Vietnam War era, Circles of Fate takes the reader from Fort Benning, Georgia to Thibodaux, Louisiana. A romantic saga, this gripping novel covers nearly twenty years in the lives of Shaunna Chatman and Todd Jameson. Constantly thrown together and torn apart by fate, the two are repeatedly forced to choose between love and duty, right and wrong, standing on faith or succumbing to the world’s viewpoint on life, love, marriage and fidelity. With intriguing twists and turns, fate brings together a cast of characters whose lives will forever be entwined. Through it all is the hand of God as He works all things together for the good of those who love Him and are called according to His purpose.PATROIT HEARTS by Tammy TrailMajor John Tennant has recently returned from his post on the frontier to find his home razed to the ground and his children in the care of strangers. He struggles to bring the man to justice for the murder of his family while providing for his children.
After her fiancé is impressed into the Royal Navy, Elaine Henderson vows to help her brothers fight for Independence. For three years she has carried bitterness in her heart, until providence intervened to replace it with two motherless children.DARING TO LIVE by Mary VeePatriotism On American Soil
Little did Staff Sergeant Ethan Hartman know that being sent stateside would result in his next search and rescue mission.
Liz Westcott fights for a place to sleep after being evicted. She settles for a local train station, the only available roof. There are those who live under that roof, thieves and liars, who look for people like Liz, welcome them into their family, then prevent their escape. Liz's only hope until she can escape, is Daring to Live another minute.
Suspense that will keep you reading long into the night.

If you love suspense novels, pick up this collection at Amazon - again only 99 cents!!

Hope you enjoyed today's spotlight and that you'll check back weekly for Tuesday Treasures, Thursday Thoughts and Saturday Spotlight.

Posted by Pamela S Thibodeaux at 8:58 AM

Wow, the stories sound fantastic and what a bargain!

Lovely, Pam! Star-spangled is such a good word. Much success for you.

Pam, these sound really good, and what a deal!

Great deal! And all of them sound like really great stories. Thanks for sharing!

Would you be taken with exchanging links? mgm online casino

There's noticeably a bundle to know about this. I assume you made certain nice points in options also. online casino bonus