#SaturdaySpotlight is on Carol Nichols & A Different Season

We're heading to Eureka, CA & Redwood National Park today so I may not be around much but please welcome Carol Nichols back to our blog with her debut release, A Different Season.... 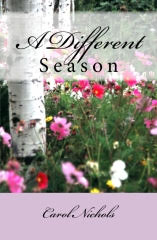 A Different Season opens in Oklahoma’s oil-rich countryside. The story finds Constance Sinclair, after the death of her husband by dubious circumstances, on the trail of his assailant which throws her into a murder. A stranger dupes Connie into thinking their chance meeting was all by happenstance and leads to romance and the final realization that she may be in love with a murderer.

Rosie Redmond, a co-worker, adds a comic interlude to the story as everyone tries to ascertain the workings of her mind.

The succession of different seasons, of Connie’s life, begins with first love, death, murder, romance and the outcome of circumstances of her dead husband’s hidden past. This topsy-turvy love-hate encounter keeps readers engaged with every turn of the page.

A Different Season’s sequel, Mist of the Moment, is planned for fall of 2017.

Excerpt:
Connie jumps while placing her hand over her mouth to stifle the urge to scream as the all too familiar rap tap tap can be heard from the other side of the door.  Her mind races back through her thoughts and her previous feelings, which has consumed her every moment since leaving the police department. The thought that JJ has murdered that girl, and even if he hasn't he certainly knows something more.  Then, as the thunder increases in intensity and frequency, so do her fears.  She can hear the wind fiercely blowing as it tosses trees and limbs around beside her windows leaving ghostly shadows on her floor.

Once more, the rap tap tap that used to send her heart racing, as she could hardly wait to get to the door, now makes her release a small, but still audible, gasp.

"Connie, open the door.  I’m sorry I left so unexpectedly the other evening.  Please let me in.  I know you must be confused.  Please let me explain.  I need to have you understand."

Connie tries desperately to control her now shallow breath.  What to do?  She grabs her phone to call 911, as she just can’t open her door to a possible criminal.

GREAT Excerpt, Carol! A Different Season at Amazon in Ebook and Print! 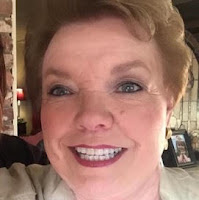 Carol has worked in the legal profession since her Junior year of High school where she was a legal secretary at an El Reno law firm.

Carol continued her career in law enforcement with the Canadian County Sheriff’s Office and worked under four different administrations before accepting a position with the District Attorney’s Office.

After a move to Southern Illinois, she worked for a criminal defense attorney before moving to Pennsylvania.  In Pennsylvania, Carol started writing through journals.  Upon moving back to El Reno in 1992, she was employed by USDA, Ft. Reno before retiring.

Carol’s journey continued with family illness thus heightening her awareness of life's fragility and resumed in-depth writing to move things from her mind to paper after the loss of her husband, Glen.
Carol has found release and expresses her feelings about life, marriage and faith which is well realized in her writings.

She resides in El Reno with her Jack Russell terrier, Patches. Find out more about Carol by visiting her website.

Hope you enjoyed today's post and that you'll join me each week for Tuesday Treasures, Thursday Thoughts and Saturday Spotlight.

Wishing you much success, Carol. Sounds like a great story!

What an excellent premise! Just my kind of book. And, I'm in Oklahoma, so that's even better! :) Best wishes!

Sounds like a great story with an amazing plot! Good luck to you!

People in law and law enforcement give crime and mystery fiction authenticity. Congrats on what sounds like a fine book.

Thank you for all your positive comments. I'm humbled by Pam's kind generosity and friendship she has extended. Hugs to all.