I pray your Easter weekend was blessed and happy.

Today I'm pleased to share a very special Tuesday Treasure with you from my friend and fellow PBG author, LoRee Peery. 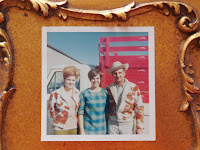 Christian romance author LoRee Peery strives to remember the Lord’s redeeming grace each day when she surveys her sense of place in Him and where He has placed her. She clings to I John 5:4 and prays her blended family and dozen grandchildren see that faith. HerFrivolities Series and other publications are available at Pelican Book Group.

Recent Memories of my father have been tied up with what happened to end his earthly life, I took this opportunity to remember him as a person. He studied Latin, graduated at 16, attended trade school, and was in the Army during WWII. Dad could have gone and done anything he wanted to in life, but he returned home to farm.

A lover of the land, he took pride in his work. County-wide, people knew Dad for the size and symmetry of the eight-ton haystacks he put up, without using a cage frame. He figured profit and loss numbers in his head, and counted grazing cattle faster than imaginable, separating calves, cows, and those about to drop. Resourceful, he’d fix things with baling wire, spit, and curses. He rigged up scrap lumber or branches for levers, and sometimes a prayer.

He was a hard worker and a hard drinker. On the flip side, he was a gentle pussy cat with babies. He sang “Bye-o-baby-bunting, Daddy’s gone a’hunting,” while bouncing the babies on his knee. One precious photograph shows him napping with my oldest daughter, the only grandchild to know him. She’s wearing pink sleeper pajamas and the two of them wear matching rosy cheeks.

Dad used quaint expressions, such as “hollered like a stuck pig.” “Dead as a door nail” and that’s a cock ‘n bull story if I ever heard one.” For some unknown reason he called a sink “zink.” One of Dad’s favorite phrases was, “Smell that money” referring to a feedlot, or the barnyard smell.

He caught trout with his hands along the overhanging banks of Verdigre Creek, along a narrow channel where the banks hung over the water. He waited, bent over with hands just above the water surface. It worked best if the fish swam upstream. At sight of a fish, he lowered his hands into the water, lifted, and thrust the trout onto the bank.

Exhibiting little sense of style, he thought nothing of wearing a striped shirt with plaid trousers. He stood five-foot-eight, but his wiry strength made up for what height he lacked. His deep-set eyes of hazel and lop-sided grin remain fixed in my mind.

Dad experienced severe back pain. He fell countless times on the farm and survived. While trying to force a cow up a loading chute from behind, the cow decided to go backward and landed right on top of him. Another time he was riding atop a load of bales stacked on a wagon. The bale loader was behind the tractor and suspended over the rack of bales. The tractor hit a badger hole, bales flew, and Dad’s chest banged against the loader hooks, then he flew to the ground.

He had a fine baritone voice and played the harmonica. He sketched artistic shapes and characters instead of doodling. He left behind impressive drawings, created while he was in the Army, of soldiers, cartoon characters, and an unknown woman.

Personal, deep conversation was not part of my life growing up, maybe because the people I knew used their energy working hard to survive. I see love in the calligraphy he used filling in the lines of my childhood King James Bible. He may not have said it, but I know he loved me. I heard it in his voice when he mentioned me to others. 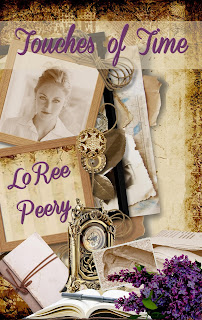 LoRee's latest book, Touches of Time is a fictional account of her father's murder and can be found at Amazon.

Sarah Bishop goes through her deceased mother’s belongings and becomes immersed in the details of her grandfather’s unsolved homicide. Determined to find who was responsible, for the sake of her unborn baby, Sarah vows to seek out the answers her mother had failed to find.

Cold Case Investigator Ford Melcher is intrigued by Sarah’s dogged drive to solve the old mystery. His current case has reached a frustrating dead end, but he comes to believe it is somehow linked to Sarah’s quest. His desire to protect her from further hurt is put to the test, especially when he has secrets he’d rather not disclose.

Answers could remain elusive as to who struck Sarah’s grandfather and left him in a ditch. Will the search for those answers open doors for her to discover the life God planned? Can she accept that plan if it includes a man who wasn’t forthright with information?

LoRee is giving away an paperback copy of Touches of Time to one lucky person who visits today so be sure and leave a comment!

Hope you enjoyed today's treasure. We're finished with our Eggcerpt Exchange blog hop so be sure and check back for Thursday Thoughts and Saturday Spotlights!

Pam, it's always a blessing to connect with you. Thank you for allowing fellow authors to share treasured memories with your readers.

Hi LoRee, what a lovely tribute to your dad. I feel like I got to know him in just a few paragraphs. You know how much I enjoyed Touches of Time...God truly blessed you with the gift of penning such a personal story with grace, peace, and love.

PamT, thanks for sharing LoRee and her book today. Love to you both.

Tanya, you touched my heart today. Thank you.

What a beautiful, well-written, touching tribute to your dad, LoRee! He sounds like an interesting man - one I would've loved to have known. He would've been so proud of you today, my friend!

Beautiful post and tribute to LoRee's Dad. I have read and loved Touches of Time. I read in in e-book form and would love to win a print copy.

I loved the post about Loree>s Dad.
I read the book and it was an awesome tribute.
I would love a paperback copy.
linderellar@yahoo.com

Loree, your description of dad was so familiar. Many of the men in my family fit his profile, the lion's share of them farmers in Kansas. It brought sweet memories of my own. Thanks so much LoRee. I hope your book is a smash hit! Cheers

Surgery six days ago. I did too much typing yesterday...
Thank You, treasured folk: Delia, Ann, Linda, Marilyn. There are other stories I can tell. I spent one Christmas a half mile up the road with a friend because we both had the measles. For some reason, my parents thought my younger siblings wouldn't catch them. Christmas Eve there was a loud commotion on the porch. My friend's dad came in with his arms full. "Santa" had flown in a helicopter and landed on snowdrifts to bring my gifts because the roof was too slick with ice for the reindeer. Actually, Dad had walked over the impassable road with my packages.

Lovely post. I'm so glad your father is so vivid in your memory. Sounds like quite a man. Your book sounds wonderful!

Loved your stories! I feel like I can "see" your dad. This line especially stuck out: "he’d fix things with baling wire, spit, and curses." Your book sounds intriguing! Best wishes for you and TOUCHES OF TIME!

What a lovely tribute to your dad, LoRee! It was wonderful to read about him. And your book sounds terrific. Wishing you much success!

How beautifully you described your dad. I loved reading about him. And your book sounds wonderful. Very suspenseful! Good luck to you.

Another multiple thanks to Alicia, M.J., Leah, and Kara. It's easy to skim blog posts, but it takes time, and sometimes effort, to leave comments. Bless you all for making me more thankful.

Thanks for stopping by, Susan. Dad was designed to be unique, as we all are. 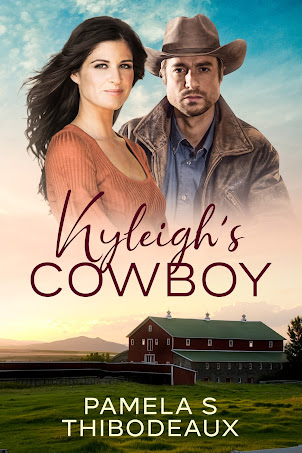