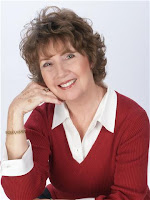 Sandy Brown - aka - Sandra Kay writes Contemporary Westerns and Short Stories with Attitude. She's been writing contemporary romance for about nine years, and has belonged to the OrangeCounty Chapter of Romance Writers of America since 2000. She's served on the Board of Directors for 3 years, two as Way & Mean's Director and one as Secretary. Her husband, Bob, has been a wonderful source of encouragement and support of her writing— never losing faith in her ability to tell a good story. Sandy has two daughters, a stepson, and 7 fantastic grandchildren.

BLURB for Heart of Stone:

A marriage in name only. A secret past. Can love be found amid the tangle of distrust and betrayal?

Alone and pregnant with twins, Amber Wilson has only a fuzzy memory of how she got that way. One thing she knows for sure—no man will ever get near enough to hurt her again. But when she meets Stone Brandon, the attraction is too great to ignore. Stone’s ex-fiancée’s betrayal has hardened his heart. Though he is drawn to Amber, he knows he can never fall in love again. Still, with her help, the dreams he has for the expansion of his family’s ranch can become a reality. A platonic marriage seems like the logical answer for both of them—until he realizes that a marriage in name only with Amber is a hell of his own making.
EXCERPT:
“Amber?” he yelled as soon as he threw the front door open.

“Amber, where are you? What’s wrong?” Stone’s heart lurched to a start again, but thudded into his throat.

Her voice trailed off into a scream that bounced off the walls in the empty house.

He ran toward the sound, boots pounding on the wood floor, joining her scream in the echoing cavern of the vacant rooms. Fear gripped him when he reached the stairwell to find her collapsed on the landing, her back against a wall. As he neared, her face contorted and she cried out in pain.

He bounded up the steps three at a time, and dropped to his knees.

Her hazel eyes seemed too large for her face, and he heard the fear in her voice.

“Its okay, Amber. I’m gonna take you to the hospital. Don’t worry. Everything will be all right.”

Stay calm, cowboy. Don’t let her know she’s scaring the hell out of you.
Wow, sounds like a great cowboy story!
That wraps up another edition of Saturday Spotlight.
Until later....take care and Be Blessed!
PamT
Posted by Pamela S Thibodeaux at 2:01 AM

Great excerpt. Why do men always panic...actually I can't say that. My husband didn't panic...I felt like a bug under a microscope. I think he watches too many surgery stories on TLC.

But it was good he didn't panic with our first one. I kinda passed out/crashed right after they gave me an epidural. When the head nurse shouts for help...you'd think he'd panic...but no he just stood out of the way and watched. I thought I went to sleep and woke up with an oxygen mask on. Not happy trying to breath through an oxygen mask for the remaining 6 hours of labor.

Hi Beth! Your husband sounds like good research material when you're writing your heros. My husband is multi-layered like that--funny, smart, able to take control of any situation. And that's how I patterned Stone; with a little panic mixed in at the thought of delivering twins all by hmself! :-)

Man this book sounds great, I love those in marriage only books..they always make for a cool story..lol. I am marking this one as one to get if I can't win it. :)

Thank you, ladystorm! I'm rather partial to the Brandon family in Heart of Stone. lol Your name is going in the hat for the drawing, so good luck!

Great excerpt Sandra, I love Westerns an I've got this on my 'wish list'.

Thanks, Lyn. Glad to hear that you like westerns. They've always been a favorite of mine, but I read everything--just about!

Thank you, Pam, for featuring me on your Saturday Spotlight. I enjoyed being here.

Wow, thank you ALL for stopping by!

If you want to be spotlighted, email me.
PamT

My husband drew the winner's name out of the hat! Hywela Lyn will receive a download of Heart of Stone. Happy reading, Lyn.

Thank you, Lyn, Beth, and ladystorm for participating.