Good Morning and Welcome to our First Wednesday Words with Friends post of 2022!

Today, my friend and fellow PBG author, Anne Greene shares some more information on her book, Trail of Tears. 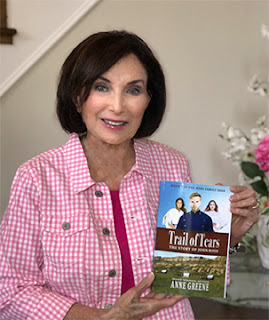 TRAIL OF TEARS BY ANNE GREENE
Many readers ask me why I wrote Trail of Tears? Most people in the deep South are acquainted with the history of the Trail of Tears. But I was raised in the Midwest and first heard about the Trail of Tears in Church one morning when I lived in Wheaton, Illinois. Being a history buff and unaware of such a momentous event surprised me. The history fascinated me, and my first thought was – that’s a book that needs to be written.
Then, to make history exciting for my readers, I wrote the novel depicting what likely happened to one college-bound young man forced to travel the Trail. My book, Trail of Tears, The Story of John Ross, is the result and released February of this year.
Most of the events in Trail of Tears actually happened to the Cherokee people. I brought to life the hardship, suffering, and overcoming victory of the people as they spent seven months travelling from what is now Chattanooga, Tennessee, to Indian-controlled Oklahoma Territory.
A brave Moravian missionary accompanied this thousand-member wagon train of captives, and hundreds of Cherokees turned to Christ as they overcame the difficult, treacherous journey.
The story sounds as if it might be sad … and there are tragic events portrayed, but my book, Trail of Tears, is about hope, overcoming, and finding a new way of life. I think from the first page to the last, you will find Trail of Tears difficult to put down. It’s one of my favorite books!
I’m working on the second book in The Ross Family Saga. For Such A Time As This, The Story of Jarrett Ross takes the reader into the life of John’s younger son born in the wild Oklahoma territory. My book opens with Jarrett’s adventures with the Osage Indians, continues to his time spent as a Pony Express rider, and includes Jarrett’s being conscripted into the Union army while his older brother fights for the Confederate side. All this time Jarrett attempts to win the love of the daughter of his family’s sworn worst enemy.
I’m always happy to interact with my readers. I’d love for you to join my newsletter.
Here’s a bit more about my book:
What if you are a twenty-year-old, about to attend college, and your whole world collapses? Your mother and sister are missing, and soldiers murder your father, burn your mansion, and take you prisoner.
Trail of Tears relives one of the most heartrending chapters in American history as the US Government transports the self-governing, wealthy Cherokee nation from their ancestral homeland to relocate in hostile Indian Territory.
The Georgia militia force John Ross, with only a trickle of Indian blood flowing in his veins, to walk the thousand-mile Trail of Tears.
After John protects a full-blood Indian girl from the lustful wagon master, the cruel soldier targets John for retribution—until John’s shoved too far.
Bitter animosity explodes from a jealous Army Captain as John pushes and pulls his Conestoga wagon over mountain roads made muddy by rain and slippery by snow.
Yet the persuasive voices of the preacher and his daughter have an impact.
A new destiny awaits John at the end of the trail—if he survives. Four thousand Cherokee do not.
Multi-award winning author, Anne Greene, loves writing about alpha heroes who aren’t afraid to fall on their knees in prayer and about gutsy heroines. Her latest full-length book is Trail of Tears, The Story of John Ross.
Her first novel in her CIA Operatives series opens with Shadow of the Dagger. Her Women of Courage series spotlights heroic women of World War II. Blast off with Angel With Steel Wings. Her Holly Garden, Private Investigator series opens with Red Is For Rookie. Enjoy her award winning Scottish historical romances, Masquerade Marriage and Marriage by Arrangement.
For shorter read, enjoy her twenty novellas.
Anne lives with her husband, Colonel Larry Greene, and her buff and white Shih Tzu, Lily Valentine.
Anne hopes her stories transport you to awesome new worlds and touch your heart. Discover more about Anne at:
https://www.AnneGreeneAuthor.com
https://www.amazon.com/Anne-Greene/e/B004ECUWMG
https://www.bookbub.com/profile/anne-greene
https://www.facebook.com/AnneWGreeneAuthor
https://www.goodreads.com/author/show/1873472.Anne_Greene
https://twitter.com/TheAnneGreene
Check out Annie's previous visits HERE.
Thank you so much, Anne for sharing with us the story behind Trail of Tears! Here's wishing you a blessed and prosperous 2022.
Well friends, I hope you're not the least bit disappointed in our first post of the year-I know I'm not-and I hope you'll drop by weekly for more Wednesday Words with Friends and Saturday Spotlight.
Until next time, take care and God bless.
PamT
Posted by Pamela S Thibodeaux at 1:30 AM
Email ThisBlogThis!Share to TwitterShare to FacebookShare to Pinterest
Labels: @TheAnneGreene, anne greene, christian author, historical fiction, pamela s thibodeaux, pamela s thibodeaux blog, Ross Family Saga, saturday spotlight, Trail of Tears, wednesday words with friends

Your book sounds like a fine read! Congrats and best wishes.

This book sounds so amazing! I look forward to reading it. I too have always been a history buff and the Trail of Tears in particular has drawn my interest.

Anne, The book sounds wonderful. Thanks for sharing.

I've heard of the Trail of Tears, but never to any depth. So glad you wrote this story!

A fascinating, if that's the right word, period in history.

This sounds heart-wrenchingly amazing. Wonderful idea. Thank you for sharing!

Thanks, Kara, I know you'll enjoy reading Trail of Tears.

Jacqueline, Yes. Trail of Tears has proved to be very popular! Actually men enjoy it as well. Good to see you here.

Lesa, you're a girl after my own heart. And history told in personal form as Trail of Tears, is the very best kind. Good to see you here.

Carol, I love sharing my books with avid readers. I'm so glad you visited. Trail of Tears is a particularly sad time in our nation's history, but my story is uplifting -- since God is in control.

Alina, after you read Trail of Tears, the story of John Ross, you will know all about American's Trail of Tears. This is a story you won't forget. So good to see you here.

Mary, I know you will love my story. This is a favorite of all the 30 books I've written. Good reading!