You know the old adage, "it's good to go but it's good to be home." After a long, busy week in Alaska and nearly 40 hours to get home due to flight changes, I can certainly attest to that LOL!

Last year I was so happy to introduce you to Kristen Joy Wilks with her PBG title, Yellowstone Yondering. Today Kristen joins us with two RomCom titles so please give her a big, WELCOME! Take it away, Kristen.... 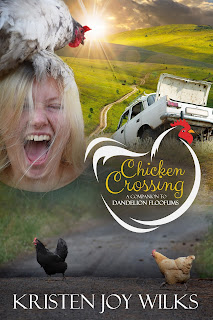 Why did the chicken cross the road?
The machinations of poultry are difficult to decipher. Add an infuriating youth pastor, a terrifying crash at highway speeds, and trap-building kids too bored for their own good and you have something a little more serious than a knock-knock joke.
After the local librarian foolishly agrees to haul a trailer full of chickens over the pass, an unexpected crash sends fifteen beloved hens scattering into the wilderness. Shelby and the exasperating Jack must locate, capture, and return the chickens to his nephew before the talent show at the boy’s new school on Monday. The problem: chickens are incredibly difficult to catch. Especially when dispersed throughout the wild. When they take refuge in a coop occupied by twenty identical hens and guarded by multiple NO TRESPASSING signs and a pair of bored mountain children who have been watching way too much TV, tensions rise and feathers fly. Can Shelby thwart an alarming collection of unlikely traps and find the chickens before they are devoured? Imagination and ingenuity go so very wrong in this epic clash of inventive child verses accidental chicken thief.
Excerpt:
Shelby gasped for breath, still gripping the wheel. A chicken landed on the wind shield. Oh, no! First a bear and now she’d hit a chicken. No, the chicken was fine. Just a little ruffled. Shelby tried to unclench her hands from the wheel while Avery whooped with excitement, little arms held high as though they’d just done a loop de loo on a roller coaster. Two more chickens landed on the front of the car. One of them clucked and laid an egg.
Shelby gulped down great sucking breaths and stared at the chickens, then the egg.
The chickens!
They were on a mountain pass. She was parked both in the middle of nowhere and also right beside a highway. A more dangerous location for domesticated fowl would be difficult to find and yet Shelby had brought Jonathan’s beloved flock into just such a place. Then she’d promptly smashed their coop wide open. The chickens. The smart and talented pet chickens whom she’d been charged with safely moving—those chickens—were loose.
Chicken Crossing is available now: Paperback, Kindle, Nook, Kobo, or Free to newsletter subscribers. 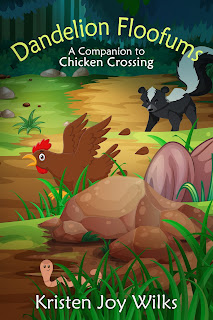 A chicken on the run!
When her traveling chicken coop explodes and scatters everyone into the wilderness, Dandelion Floofums must rescue her boy from evil kidnappers. But how can she succeed when she has to escape insane forest humans, a plethora of pesky traps, and The Stripy Death Kitty who is intent on making her his next meal? God is clearly not a chicken or He would have taken better care of her special boy! Can Dandelion Floofums save her boy and figure out if she can trust her Creator, or will The Stripy Death Kitty win the day?
Excerpt:
Straw and wood splinters filled the air. Feathers flew. Dirt and gravel erupted all around. The trailer creaked once and then flopped over onto its side with a thump. The roof fell off and fading sunlight streamed into the coop.
Dandelion Floofums ruffled her feathers and gave a cluck. Her plan had worked perfectly. Thanks to the bear that she had called, every hen in the flock was free! It was time to jump onto that bear and ride their way to Jonathan and a fabulous victory! 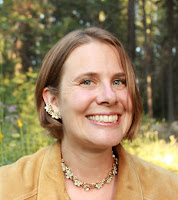 Kristen Joy Wilks is an author, camp photographer, and the mom of three teenage boys who have pet chickens. She writes about what she loves: the quiet of the forest, the ill-considered schemes of unstoppable children, and the love of loyal pets who will never leave your side … as long as you pack meal worms! Chicken Crossing and Dandelion Floofums are available in paperback and e-book. Or, try one of her chicken-themed books for free by signing up for Kristen’s quarterly newsletter at http://www.kristenjoywilks.com/. I’m also on social media and love to hear from readers! Facebook, Instagram, and Pinterest.

Wow, Kristen, these books sound like a lot of fun! Good luck and God's blessings with them.

Hope you enjoyed the spotlight today, friends and that you'll check back weekly for more Wednesday Words with Friends and another Saturday Spotlight.

You sound like you'd be a very interesting person to know! I loved what I read of your chicken stories. Thank you for sharing.

Congrats on the publication of your two books! They look great.

Thank you so much, Pamela, for having me on the blog! And thank you Susan, Mary, and Jacqueline for your kind comments. Yes, our pet chickens are very funny and I so enjoyed writing these chicken-inspired romances! 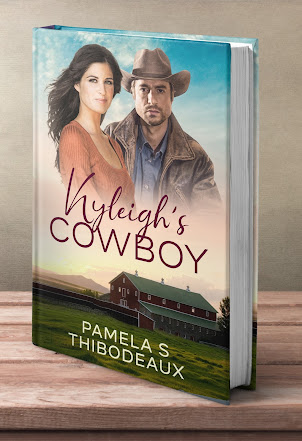