#SaturdaySpotlight is on Sylvia Hornback & Jeanne!

Lot's going on today. Bayou Writers Group meeting starts in a few hours then a benefit for my uncle goes on all day and into the evening - perhaps early hours of tomorrow morning. I doubt I'll attend the whole event but there'll be lots of music, food, dancing and an auction to help with his medical expenses. So if you're in the Lake area stop on by Mary's Lounge (he's a musician) and see what we've got!

Our guest is brand new to the blog so without much further ado, let's WELCOME Sylvia Hornbak with her new book, Jeanne! 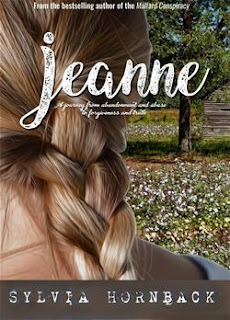 At dawn on a sweltering summer day scrabbling sounds alerted Jeanne of the intruder downstairs.

The pull chain rattled against the light bulb in the kitchen.

Instantly a sliver of yellow light raced up the stairs and into her bedroom.

Someone was moving about inside the house, and had even been bold enough to turn on a light.

It wasn’t the first time she’d awakened to the sounds of this intruder.


Q: Talk about what inspired your new book, Jeanne. (pronounced “Gene”)
A: Jeanne’s story has been abiding with me for a very long time. She worried at the edges of my consciousness as a story to tell because of my own experiences. I lived with my own grandmother for five years while the rest of my family lived next door. It seemed normal at the time, but the rejection had a long-term effect. However, my grandmother taught me the love of God and that saved me. She and I walked to church every Sunday and I learned about love there. I was also compelled to include my little brother in the novel because he was so special to me and all my family. I still miss his unconditional love every day.

Q: Jeanne is a fictional story, but you say it is based on real events. Talk about the meshing of the two.
A: Jeanne has two brothers in the story and her younger brother Robby is a special needs child. This character is based on my own younger brother.  I patterned Robby in Jeanne after him. Cary was an angel here on earth for twenty-three years. He brought unconditional love into our family. I wanted to convey that special love through the character, Robby. In Jeanne, the facility referenced in Austin was the first state home for what then was called the feebleminded. Children were boarded there under lock and key for fear of them developing criminal tendencies, and their families were not allowed to visit often. In the 1940’s when the story takes place, Robby’s condition was known as Mongolism. This label didn’t change until the 1970’s when the term was replaced with Down Syndrome. Today, services and opportunities for special needs children have dramatically changed. Over the years, parents, teachers and communities have come to understand and accept children of special needs. We are blessed to have them in our lives.
Q: The book deals with an abusive mother and a dysfunctional family. What type of research did you do for the novel?
A: The story of Jeanne expanded when I became involved with organizations against abuse. I talked to women who shared their stories, and I have woven their renderings into the fabric of Jeanne. Because of their stories, I have two other books I am writing about women who have experienced abandonment and abuse and have risen to love because of their love of God. Jesus saved them, too. It is the common thread and will be told in all three of the books.

Q: Talk about your involvement in helping women who have been abused.
A: I have supported organizations against abuse for many years, and in my years as an educator, I observed children and their families being torn apart by abuse in many forms. As president of our local Woman’s club, I became involved in the Wise Hope House, a shelter for battered women. Besides donating money, our group donated clothing specifically for women to be able to dress for interviews for jobs. One woman came for help to escape abuse with her three children wearing underwear and a hospital gown. For several years I have interviewed women of abuse and talked to them about their beliefs and how their faith helped them. While the women are kept anonymous, their stories must be told. Their voices must be heard.

Q: What do you find are the most difficult issues for people who grew up in a dysfunctional family?
A: The pain and hurt came from believing that a parent didn’t love them. In fact, some believed they were hated. They tried to figure out what they had done wrong. Many voiced wanting to know the truth and felt they lived in secrets. They had to develop ways to cope with their roller coaster emotions. Some tried to be the opposite of their abusive parent, while others withdrew. Jeanne chose to seek solace in prayer and believing in God.

Q: How does forgiveness help someone who was abused or neglected as a child?
A: The story of Jeanne focuses on neglect and physical and verbal abuse. As a child, there are few opportunities to get away from this treatment and forgiveness becomes harder and harder as the abuse is repeated. Forgiveness in this case comes knowing the abuser does not change, but the abused person learns ways to protects herself from future abuse. Jeanne manages this as she becomes an adult and is able to take care of herself and not be around her mother. Her forgiveness of her mother took away her bitterness, resentment, and anger.

Q: What do you hope readers gain from Jeanne?
A: I hope the reader understands the role Jeanne’s belief in God played in her life, her survival, her strength, and her ability to forgive. It is important to know that even if a family situation is dysfunctional, a person can find love through other people in their lives. Maybe some readers will identify with Jeanne and learn to cope through her experiences. 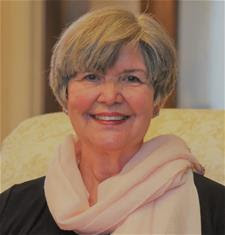 Sylvia Hornback received her Doctorate of Education Administration from Texas A&M University. She is the current Chair of the Board of Directors for ENERGY Worldnet, Inc., and served as an educator, principal and school superintendent for over two decades. Among her many accolades, she was recognized as a National Blue Ribbon School Principal by the U.S. Secretary of Education. For the past ten years, she has served as a Bible study teacher at First United Methodist Church near her home in Decatur, Texas. Her first novel, “The Mallard Conspiracy,” was published last year. For more information visit www.SylviaHornback.com.

Published by Briggs & Schuster and brought to us by Adams Media,  Jeanne can be purchased at Amazon.

Sounds like an AMAZING story, Sylvia! We certainly wish you the best of luck and God's blessings with it!

Thanks for visiting, Friends. Be sure and leave a comment to be entered into my monthly gift card giveaway!

This sounds like a wonderful novel. Congrats and best wishes.

A very sad, but pertinent subject to write about. Best of luck with sales and promotion.

How blessed you were Sylvia to have had such wonderful Grandparents. What a wonderful talent to have been able to turn your experiences of neglect and abandonment into a book that will help others. I wish you much success and also hope you get a lot of feedback from readers who tell you how much your book helped them.

Oh my gosh. This novel sounds wonderful, yet heartbreaking. I'm sure the real-life experiences you've used as inspiration make the story that much more emotional and compelling. Thank you for writing about such important topics. Wishing you the best!

How wonderful that you're sharing your knowledge and experiences in the form of a novel. Story is such a powerful way of reaching people. Best of luck with the book.