#SaturdaySpotlight is on Theresa Lynn Hall & Ransom in Rio!

As I've mentioned many times before, I love promoting authors and their books, but having a fellow PBG author is just the bomb!

Today I am so very excited for my guest, Theresa Lynn Hall who is in our spotlight with her brand new release, Ransom in Rio a Passport to Romance title from Pelican Book Group!

Please give her a great big WELCOME! 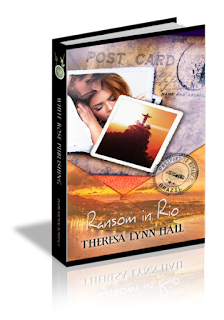 Private Investigator, Braden McCoy wants nothing more than to finish out the week doing a little fishing from his boat. The ex-special ops vet enjoys his peaceful life and loves his new career. He’s learned to put his past behind him and enjoy his blessings. Until a mourning redhead walks into his office and changes his plans.

Lexi Ramos always knew her family was dysfunctional. Until the sudden death of her brother, she never knew exactly how much. Consumed with questions surrounding his accident, she seeks the help of a private investigator. What starts out as a murder investigation in Cozumel, quickly crosses borders and escalates into a race against time to save them both from Brazilian kidnappers, who somehow know more about her family secrets than she does. Lexi soon realizes that life comes with a price.

Excerpt:
Her worst nightmare had come to life.

Now, the fear of what she would do if it ever happened was over, but the loss of her brother came with a burden she hadn't foreseen. It left her to deal with her family alone. To carry the legacy. To protect the empire. To convince everyone to believe the lies.

“He was always so careful,” she muttered to herself as she drove.

Snow had started falling as the last “Amen” was said at the cemetery. The heavy white powder made the pale yellow lines on the road fade in and out of sight. Lexi tugged her sweater tighter around her body with one hand and gripped the steering wheel with the other. The funeral had drained her of what little emotional strength she had left. It was crazy, but several times throughout the day she'd found herself picking up her phone to see if Jace had messaged her. He used to text or call every day. Silly stuff sometimes, like never walk the dog with no shoes on. Once he'd texted that he had the hiccups.

“I just can't believe he’s gone.” Lexi glanced at her friend. She didn’t expect Kristy to say anything. Nothing she could say would make the pain go away.

Jace had been the perfect big brother, Lexi’s best friend. From an early age, they learned that sticking together in a dysfunctional family was their only hope. One thing Lexi knew for certain was that Jace wouldn’t leave her here alone. He would not have put himself in danger for a stupid fishing trip. His chance to break free of their crazy family was finally around the corner. He'd just bought his girlfriend an engagement ring. They had plans to move to New York as soon as the wedding was over. Now he was gone. None of it made any sense. Why was she the only person who could see that something was wrong with ruling the cause of death as accidental?

Lexi brushed at her red hair with a careless hand and caught a glimpse of her swollen, blue eyes in the rear view mirror. She hardly resembled her brother at all—a fact that had always bothered her, but she’d never questioned it the way Jace had. He had always asked where he'd gotten his blonde hair.

“Lexi, why don’t you stay with me tonight?”

The sound of Kristy’s voice startled her. “I’m sorry. I’m really out of it.” She smiled and wiped a stray tear from her cheek. “Thank you for everything. You’ve done more than enough for me over the past few days.”

“What’s wrong?”
“I can’t stop thinking...I just don’t think this was an accident. It couldn’t be. Jace didn’t even like to fish. He wouldn't charter a boat to go fishing in Cozumel. He liked nice restaurants, museums, theaters. Not fishing. And then there’s the fact that he didn’t take Selena with him. He always had Selena with him. Why doesn’t anyone else seem to think this is odd?”

Great excerpt, Theresa! Where can we get a copy?

Wonderful....now let's find out a little more about you....

Theresa is an award-winning author of Christian Fiction. A native Texan, she loves to write suspenseful stories that happen in small Texas towns with old fashioned Southern values. She’s an elementary teacher and mom to two boys—the oldest being in law enforcement, which comes in handy when she’s researching.

When she’s not teaching kids or writing, she loves to cook, read a good suspense, and binge-watch episodes of Dateline. Someday she plans to seek help for her chocolate addiction, but she’s just not ready yet. She loves to hear from readers and can be found at www.theresalynnhall.com

Thanks again Theresa! Good luck and God's blessings with your new release!

Hope you enjoyed today's post friends and that you'll join me weekly for Tuesday Treasures, Thursday Thoughts and Saturday Spotlight.

congrats on your release!

Great excerpt. You captured perfectly that awful realization that you can no longer reach out to the person you just loss...like calling your mom for that missing ingredient in a family recipe. Wishing you much success with the book!

Story sounds like a good one. Congratulation on your new release.

Theresa, the excerpt was "the bomb"! Wishing you much success with this must-have release! Enjoyed meeting you today.

Theresa, your excerpt did it's job--now I want to read the rest of the story. Well done! Thanks, Pam, for sharing your blog.

Thank you so much for the comments!! I had so much fun writing this book. It was one of the first books where I had to trim back a lot of scenes to fit the word count. I could have written these characters into a novel.

Thank you for visiting today! I planned to be here sooner but I was putting a desk together a little too late last night. NOT fun!!

Thank you, Leah! I really want the readers to see how much she is struggling with the death of her brother. She has to search to find her strength to move on. Hope you enjoy the book!

Thank you so much, Theresa! Nice to see someone share the same spelling of my name! Lol!

I hope your book blesses your readers and leaves a lasting impression. Cheers

Your book sounds exciting! Best of luck with it.

Wow. Your excerpt had a perfect hook. How could anyone not read what follows "Her worst nightmare had come to life?" Great job. Best wishes for tons of sales!