#SaturdaySpotlight is on Angela K Couch & The Patriot & the Loyalist!

I'm a bit late posting today's spotlight and I apologize for that, but I'm sure you won't be disappointed in our guest.

Angela Couch shared thoughts with us last year and today we welcome her back with a brand new release from Pelican Book Group/White Rose Publishing! 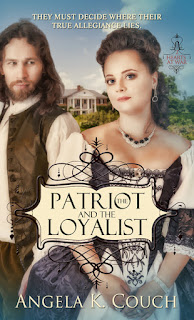 Completing his three years in the Continental Army, Daniel Reid still has no desire to return home—not after losing the woman he loves to a British Captain—so he volunteers to ride south through enemy lines and deliver a message to Colonel Francis Marion, the Swamp Fox. With his temper needing a release and a dark haired beauty finding her way into his broken heart, Daniel decides to join the Swamp Fox’s efforts against the British. Little does he know the British still have the upper hand.

Lydia Reynolds has learned that love comes at a price, and she refuses to pay. Better to close her heart to everything and everyone. When her brother-in-law won't grant her passage to England, where she hopes to hide from her pain, New Englander, Daniel Reid, becomes her only hope—if she can induce him to give her information about the notorious Swamp Fox and his troops. When the British grow impatient and Daniel evades her questions, Lydia must decide how far to take her charade. The poor man, already gutted by love, hasn’t grown as wise as she. Or so she supposes…

Until the truth is known, the muskets are loaded…and it is time to decide where true loyalties lie.

Lydia huffed and settled back into her seat. The New Englander sat there looking all too confident and sure of himself. Nothing she hated more than an arrogant man. Except perhaps an arrogant rebel—so certain breaking with England was the only way. They were instead destroying the colonies with this war and murdering good men. Like her father.

She lifted a corner of the thick velvet curtains. Only two and a half blocks to go. She’d suspected Wilsby of his inclinations toward the rebels for a while now. The arrival of Daniel Reid seemed only to solidify both their guilt, and if she was wise, she could use them to her advantage. “We’ll be there soon.” Lydia dropped the folds of crimson curtain.

She met his gaze. “Why do you say that?”

He shook his head and looked to his cane. “No reason.”

“I do wish you would be more forthright, Mr. Reid, before our journey comes to an end. I can help you.”

She gave him a knowing smile. “Before I incriminate myself, tell me truthfully that you are a Patriot.”

He studied her for a full minute or more, the methodical plod of hooves and the squeak of the axels marking the passage of time. He sighed and raised his hand. “All right. Now tell me how you plan to assist me?”

I knew it. She grinned and slid to the edge of her seat. “We have a British major billeted with us. And my sister’s husband is very loyal to the crown—an outspoken man. You would be surprised how often our table is laden with talk of military strategy and plans.” She tipped her head slightly to one side, feigning the look of innocence. The bait was laid for him. The question remained as to whether he would bite.

Sounds like a wonderful, Historical novel! If you've a mind to check it out, The Patriot & the Loyalist can be purchased directly from the publisher, at Barnes and Noble, and Amazon! Now let's find out a little more about Angela.... 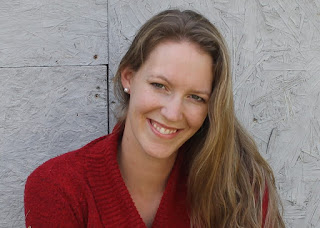 To keep from freezing in the Great White North, Angela K Couch cuddles under quilts with her laptop. Winning short story contests, being a semi-finalist in ACFW’s Genesis Contest, and a finalist in the International Digital Awards also helped warm her up. As a passionate believer in Christ, her faith permeates the stories she tells. Her martial arts training, experience with horses, and appreciation for good romance sneak in there, as well. When not writing, she stays fit (and warm) by chasing three munchkins.

Well Friends, hope you enjoyed today's spotlight and that you'll join me each week for Tuesday Treasures, Thursday Thoughts and another Saturday Spotlight!


Posted by Pamela S Thibodeaux at 9:05 AM

Thanks so much for featuring me, Pamela!

Congrats, Angela! I just finished an American Revolution romance myself and am encouraged that you found a publisher for yours. Best wishes for your success.

Sounds like a wonderful read. Enjoyed the excerpt! Best wishes.

Jacqueline, Thank you! I think between books and movies/TV shows the Revolutionary era is growing in popularity. Good luck!


Alicia, Thank you! Hope you get a chance to read the story. :)

Congratulations on your new book and wishing you much success.

I really like your story premise, Angela. All the best with your release.

Congrats, Angela. It seems you've had a terrific PR push. I hope your book sells like pancakes. Cheers