Good Morning and Welcome to the final edition of Wednesday Words with Friends for April 2020!

Today is your last chance to enter into my monthly gift card giveaway so be sure and leave a comment. I will pick a winner and email him or her and announce on Saturday Spotlight this weekend (May 2nd).

Our guest, T.I. Lowe has visited before so please welcome her back with the first of her new "Carolina Coast" trilogy releasing from Tyndale House throughout this spring/summer.

1.What inspired you to write Beach Haven?
The Bible verse shared at the beginning of the book sums it up. “‘For I know the plans I have for you,’ says the Lord. ‘They are plans for good and not for disaster, to give you a future and a hope’” (Jeremiah 29:11). Storms in life can come in and make such a mess that this promise can get overlooked. Haven means “refuge,” so I was inspired to write a story centered around finding our haven in God during these storms, seeking his refuge and redemption in the aftermath. Readers will see this physically manifested through a hurricane and spiritually demonstrated through Lincoln’s redemption of faith.

2.What are you most excited for your readers to experience through reading this story?
I’m most excited for readers to experience the victory of redemption. Lincoln will make mistakes, he will fight against necessary change, and he will try running from his faith and the feelings developing for Opal. I loved, loved, loved when I finally got to the part of the story where this giant of a man humbles himself to accept it all. He is a decorated soldier and wore bravery like a fine suit before he was wounded in battle, but I found him at his strongest when he stood up for Opal and when he reconciled with his father.

3.What role does faith play in this story?
Life is a gift from God, even when we perceive it to be in ruins and past repair. During a confrontation with Lincoln, Opal points this out to him by checking his pulse. She tells him, “Each pulse you have is another chance. Another opportunity. . . . You’re a living breathing miracle. Your life is a gift from God and yet you’ve just wasted eighty-eight chances to appreciate that in the last minute.”

4.What lessons or truths do you hope people take away from Beach Haven?
Just because a chapter of your life inserts an unexpected plot twist and is far from what you had planned doesn’t mean the story is over. Embracing change is never easy, but it’s a part of life.

5.As an author, what did you particularly enjoy about writing this story?
The most enjoyable part of this story was introducing the Knitting Club, a geriatric group of busybodies. Opal has this thought in the book: “It was said that the Knitting Club came over on the Mayflower and somehow found the fountain of youth upon landing.” These feisty broads are the comic relief of the story with interesting dashes of wisdom thrown into the mix. They are big fans of mischief and meddling.

6.What was the most difficult part of writing this story?
When I create a character with such an altruistic background as Lincoln’s military career, my goal is to pay my respects and to honor them. I’m always a little nervous about getting that right and mindful of how it will be perceived.

7.Can you tell us about your inspiration for the main character in this book, Opal Gilbert? What about Lincoln Cole?
Opal is what folks consider weird. Different. Too silly at times. She allows people to form those opinions but doesn’t allow them to keep her from enjoying the eccentric fit of her quirkiness. Opal’s purpose is to inspire readers to own up to their uniqueness. Lincoln is a big ole teddy bear hiding behind a grouchy pout, but boy does he have one fierce stubborn streak. Once his mind up is made up about something, there’s no wavering from it. Lincoln finally reaches a point in the story where there is no other choice but to come to terms with accepting God’s repurposing plan for his life.

8.Can you tell us more about your inspiration for Opal’s shop, Bless This Mess?
I’m a huge fan of the show Fixer Upper, and I love the idea of taking something old and considered unappealing and transforming it into something new and charming. On the show, the designers highlight imperfections instead of trying to hide them. None of us are perfect, but our flaws can be used in an appealing way. This is what I hope for readers to discover while they are exploring Bless This Mess.

9.What can you tell us about the relationship that forms between Opal Gilbert and Lincoln Cole?
Neither one of them wanted a relationship. Opal’s focus was restoring her shop in the aftermath of Hurricane Lacy, and Lincoln’s focus was restoring his life, which was left in ruins due to a career-ending injury and the poor choices he made afterward. Even though they both fight against their developing feelings, of course love wins in the end. Exploring the unexpectedness of their love story was an appealing challenge for me. They butt heads quite a bit, but both have that endearing quality where they have each other’s back. I’ll share one of my favorite scenes below that showcases this when a guy makes fun of Opal in public.

“Aw, come on, Opie. You know you earned your weirdo status.” Ray laughed like it was the funniest thing until the formidable man behind her leered over her shoulder. Lincoln’s rigid stance pressed close to her, and Ray’s taunting eyes froze as the shadow encased them both.
“Who are you?” Lincoln asked with enough grit in his voice to scare even Opal.
She was about to back away from the confrontation when a strong arm secured itself around her waist, a wall of muscle pressing firmly against her back in a united front.
“Ray Owens. I’m a friend of Opal’s from back in high school.” He reached a shaky hand out and Lincoln ignored it. After getting the hint, Ray retracted his hand and swiped it over his forehead, looking right nervous.
“Opal’s never mentioned a friend named Ray. Certainly never mentioned an idiot dumb enough to call her a ridiculous name. What are you, two?”
Ray stammered out a shaky laugh. “Come on, man. I was just joking around. I mean . . . look who we’re talking about.” His head tilted toward her with his eyes growing round.
“No way are you talking about this woman standing in front of you. She’s one of the most creative and kindest people I know. You’d be wise to take note of that and to also take note I won’t be putting up with anyone treating her with anything less than absolute respect.” Without another word, Lincoln used his hold on Opal to spin her around and place her away from the hurtfulness the guy had just pushed on her.
Opal was used to having Lincoln’s strong personality aimed against her, but it was remarkably comforting to have it used as a shield of defense for her. 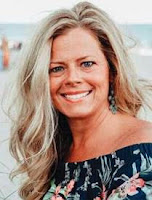 Tonya “T. I.” Lowe is a native of coastal South Carolina. She attended Coastal Carolina University and the University of Tennessee at Chattanooga, where she majored in psychology but excelled in creative writing. In 2014, Tonya independently published her first novel, Lulu’s Café, which quickly became a bestseller. Now the author of twelve published novels with hundreds of thousands of copies sold, she knows she’s just getting started and has many more stories to tell. She resides near Myrtle Beach with her family. Connect with her on her Author Page,  T.I. Lowe’s Website   Instagram   Twitter (@TiLowe)   and Facebook  Get a copy of Beach Haven at Tyndale, Amazon OR wherever books are sold.

Sounds like an incredible story, Ms. Lowe! Thank you for sharing. We certainly wish you the best of luck and God's blessings.

Hope you enjoyed today's post friends and that you'll check back each week for Wednesday Words with Friends and Saturday spotlight. Good luck in the drawing!

Posted by Pamela S Thibodeaux at 8:03 AM

What a terrific interview. I enjoyed getting to know you. Wishing you the best.

Lincoln sounds like an awesome and heroic character! Congratulations on the book. I enjoyed the interview.

I need to add this book to my TBR list. Opal's business sounds very interesting, and I will enjoy reading about the Knitting Club. The scene with Lincoln in protective mode was awesome.