#SaturdaySpotlight is on Constance Bretes & Blue As Sapphires

Today's guest is a new-to-me author brought to us by AHA promo group so let's give Constance Bretes a warm SW Louisiana welcome!

Connie began her career as a secretary in 1977 for the State of Michigan as a civil servant. She retired from the Michigan Department of Transportation after 38 years as the department’s forms analyst. She has an MBA in Business Administration – Leadership Studies, and a BA in Business Management.

She has six books published, with five more on the way.
Connie spends most of her time behind her computer, writing, editing and researching for her next story. When she’s not there, she can be found checking out ghost towns, sapphire mining, and gold panning with her best friend and husband, Jim. Her other hobbies consists of basket weaving, and jewelry making.

Now let's see how Connie came up with the premise for Blue as Sapphires her contemporary romance (R rated) ....


Blue As Sapphires was born from my love of sapphire digging, and gold panning in the beautiful Gem Mountains and Rock Creek River that runs through Philipsburg, Montana. Another issue that I’m passionate about is doing away with domestic abuse. I took the two subjects and combined them into a story that made Marissa determined to survive and overcome her ex-husband’s physical and emotional abuse, and the sheriff, Riley McCade, who is determined to love and protect her.

Wow Connie, I hear you on that particular subject! My book, Tempered Dreams deals with domestic violence too, but we're not going to get into that....I want to know more about Blue as Sapphires (great title btw!!) your R-rated, contemporary romance.... 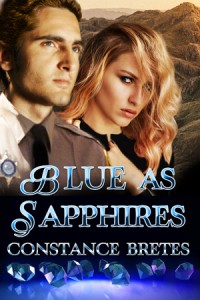 Escaping from her abusive ex-husband, Marissa Simpson came back to her hometown to start over. She had no intention of getting involved with another man, or with the community she left behind all those years ago. That is, until Riley McCade showed up.

Riley was the Sheriff of Granite County and he commanded a work force of fifteen deputies. He loved his community and went out of his way to protect and serve. When he met up with Marissa, he was bound and determined to get to know her even though she said she wasn’t interested.


The more he got to know her, the more he learned of her past. Could he protect her and earn her love?

Snippett:
Marissa laid back and wrapped her arms around Riley’s neck. She brought her lips to within an inch of his. She stared into his eyes and noticed how tender they looked. She moved in a little more, and her lips met his. He moved his mouth over hers, devouring it. While the fireworks were going off in the sky, Marissa felt her own fireworks. His kiss sent a shock wave through her entire body. Riley guided Marissa so she was on her back and he was partially on her. His Stetson concealed their faces. They continued to kiss and touch, looking lovingly at each other, and then kiss again.

The fireworks lasted for fifteen minutes, and suddenly a flashlight shone on them and voices interrupted them. Three firefighters stood in front of them singing a line from Burning Love.

“What the hell?” Riley said. A hint of irritation laced his voice. He abruptly stood up, grabbed Marissa’s hand, and pulled her up.

“We were told that there was sparks on the ground, and we were asked to put it out,” Mitch said, laughing.

“Just who the hell told you that?” Riley asked.

“Heidi,” John, second firefighter, said with an amused smile on his face.

“We can see that the sparks have been put out so we’ll head back to the truck.” Mitch smiled even wider.

Dave and Cindy stood off to the side chuckling. Someone from the crowd that had gathered around them asked, “Hey, Sheriff, got a new girlfriend?” Ripples of laughter rang through the crowd.

Marissa continued to glare at Heidi. She couldn’t believe her friend would do something like that. As the party broke up, Marissa said to Heidi, “We will talk later.”

Cute snippet, Connie! Where can we find Blue as Sapphires?

Stop by here, http://www.constancebretes.com/news--things.html for a chance to win a free copy of Blue As Sapphires or purchase it at Amazon  Beachwalk Press or Barnes and Noble

Great! Wishing you the best of luck and God's blessings Connie!

Hope you enjoyed today's guest folks, and that you'll join me each week for Tuesday Treasures, Thursday Thoughts and Saturday Spotlight!

Blue as Sapphires sounds like a real zinger! Best wishes for continued success.

Connie, Love the snippet! Best and Blessings on Blue as Sapphires!

Your hobbies are fascinating, Connie! Wishing you much success with the new book!

I love your snippet. It was a perfect glimpse into the book! Good luck to you!

Best of luck with your story- it sounds wonderful! I enjoyed the snippet.