#SaturdaySpotlight is on Dacry Flynn and Double Trouble!

Good Morning and Welcome to the first Saturday Spotlight of June, 2016!

Yeah, I can't believe either how fast this year is flying by. It's been a wet, raining week here in Louisiana....and Texas. Not sure where you are but whether rained in or out in the sunshine, this week's Saturday Spotlight is sure to be a fun read! 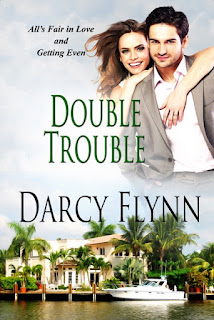 From the first moment coffee mogul, Will Carrington, gazes into the fiery, green eyes of Clare Sullivan, he’s hit with the feeling she does not like him. Not. One. Little. Bit. Used to being the proverbial prize by some gorgeous gold-digging fortune hunter, he’s learned to be careful. But with his hunter instincts now on high alert, he’s determined to find out the why behind her stormy-eyed glances.

Top home designer, Clare Sullivan, wants absolutely nothing to do with arrogant, self-assured Will Carrington, especially after he called her half-sister a gold digger. When she gets the opportunity to design his multi-million dollar Miami penthouse, she arrives at his office ready to decline his offer, and to tell him exactly what she thinks of his cruel and un-warranted comments.

While there, she overhears his one-sided phone conversation, which seems to further insult her sister. Assuming the worse, Clare makes the rash decision to accept the job and charge him a fortune in the process. Someone needs to teach him a lesson and what better way than with a swift kick in his wallet.


Since she and her sister have different surnames, Clare conveniently hides the connection to her sister. But while she works with Will, she discovers another side to this self-assured, woman-hater. A Jekyll to his Hyde. Charming and professional, he’s nothing like the man she’s heard about. What she doesn’t know is Will Carrington has a few secrets of his own.

Excerpt:
“You look like you could use a drink.” Will splashed gold liquid into a glass and handed it to her.
“No, thank you.”
“Suit yourself.” He sat down opposite her and crossed one leg over the other. Sipping his whiskey, he gave her look for look. “You know, I can do this all day and night.”
“So what? Does that mean I’m not allowed to sleep while I’m here?”
“Of course you’ll be allowed to sleep. As many nights here as it takes.” He grinned, knowing full well it would infuriate her even more.
She raised her chin a fraction. “You’re hateful. But with your history, I shouldn’t be surprised.”
“Finally, we seem to be getting somewhere. And we have a history?”
She dropped her gaze from his and stared at his chest.
“Please, enlighten me?” While he waited for a response, he swirled the tumbler in his hand, causing the ice cube to clink against the glass.
Her long lashes fluttered against her cheek, making her appear nervous, which he highly doubted.
“Why don’t you just spit it out?” he said. “While I’m in a listening mood.”
She raised her eyes to his. “I have something to say to you, all right. But I will pick the time and the place to do it.”
“Ah, a woman who takes control. I like that.”
Her sparkling eyes clouded with doubt and uncertainty. She was finding him hard to read. For the moment, that suited him just fine. A woman with her designs needed to be kept on her toes. Poetic justice, as he’d had to learn the art of being unreadable because of women like her.
“Okay,” he said. “I’ll start.” He set his tumbler on the side table, never taking his eyes from her face. “You’ve disliked me from the first day I met you. Like most men, I have the hunter instinct. And you, my dear Miss Sullivan, with your glittering, green, accusatory eyes, tossed me a dare I frankly couldn’t ignore. And whether you believe it or not, what you said to me was ‘come and get me.’”
Her expressive eyes flared.
“I did no such thing. I wanted nothing to do with you. You two-faced, arrogant...” She looked him up and down. “You and your hurtful, callous words.”
Clare puffed up, reminding him of a threatened parrot.
He stared at her, dumbfounded as to what she could be talking about. This was getting more and more interesting. He picked up his glass and eyed it. “To my recollection, I’ve seldom, if ever been the callous type.”
“You know what they say.” She shrugged. “If the shoe fits.”
Her sassy, bravado act came across purely as self-preservation, and there was something poignant in that. What was it about her that could both irritate and tug on his heartstrings all at the same time?
She blinked and glanced toward the door.
“Waiting for reinforcements?”
Her eyes widened a fraction.
“I thought so.” He shook his head. “No one’s coming. It’s just you and me.” 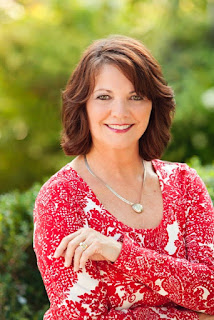 Darcy Flynn is known for her heartwarming, sweet contemporary romances. Her refreshing storylines, irritatingly handsome heroes and feisty heroines will delight and entertain you from the first page to the last. Miss Flynn’s heroes and heroines have a tangible chemistry that is entertaining, humorous and competitive.

Darcy lives with her husband, son, two English Setters and a menagerie of other living creatures on her horse farm in Franklin, Tennessee. She raises rare breed chickens, stargazes on warm summer nights and indulges daily in afternoon tea.

My pleasure Darcy...thank you!
PamT

Love this scene! Ripe with conflict! Must. Find. Time. To Read! Thanks for featuring this book and author, Pam.

Darcy, your story sounds like a good summer read. Thanks for giving us a taste. I love afternoon tea as well. It's a good time to peruse an entertaining book as well. Cheers

Fun excerpt. It does sound like a great beach read! Wishing you much success with it!

And thanks for taking the time to stop by, Marilyn!

What a great excerpt, Darcy. I so love reading sass and arrogance and how it settles down into respectful love.

Pam, I am So Jealous of your rain. Getting wearier and wearier of drought.

Wishing you well on your new release, Darcy. Hope the rain stops soon.

Tanya, you nailed it! Sass and arrogance that settles down into respectful love! Thanks for stopping by!

Thanks so much, Diane!

M.J. Finding time to read is a challenge for sure!

Love the sampling. Thanks for whetting our appetites for DOUBLE TROUBLE.

Loved the excerpt. I read Rogue's Son and loved it! I'll have to get this one too. It sounds great. Good luck to you.

Oh shoot, I totally overlooked this yesterday. So sorry! I love this story! It's such an adorable romantic comedy. Very sexy with lots of conflict and laughs.