#SaturdaySpotlight is on @HopeTDougherty and her book, Irish Encounter

Before I introduce you to Hope and her book, I'd like to tell you about a movie that releases Friday April 1st.... God's Not Dead 2! Grace Hill Media sent me this info and a link to a special  featurette of the move which you can see HERE. I'll be posting more on God's Not Dead 2 in April but wanted you to get this sneak peek.

Now on to our Saturday Spotlight guest, Hope T Dougherty! 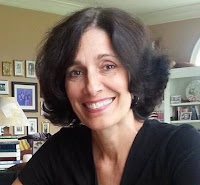 Hope Toler Dougherty holds a Master's degree in English and taught at East Carolina University as well as York Technical College. A member of ACFW, RWA and SinC, she writes for Almost an Author. Before writing novels, she published non-fiction articles on topics ranging from gardening with children to writing apprehension. She cheers for the Pittsburgh Steelers, ACC basketball, and Army West Point Football. Hope and her husband, Kevin, live in North Carolina and chat with their two daughters and twin sons through ooVoo. Irish Encounter is her first novel. Her second one, Mars...With Venus Rising, is published with Pelican Book. 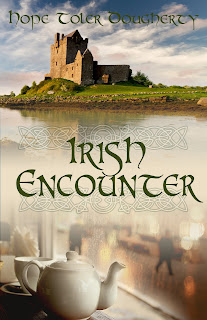 After almost three years of living under a fog of grief, Ellen Shepherd is ready for the next chapter in her ife, perhaps an adventure during a visit to Galway. Her idea of excitement consists of exploring Ireland for yarn to feature in her shop back home, but the adventure awaiting her includes an edgy stranger who disrupts her tea time, challenges her belief system, and stirs up feelings she thought she'd buried with her husband.
After years of ignoring God, nursing anger, and stifling his grief, Payne Anderson isn't ready for the feelings a chance encounter with an enchanting stranger evokes. Though avoiding women and small talk has been his pattern, something about Ellen makes him want to seek her--and God again.
Can Ellen accept a new life different than the one she planned? Can Payne release his guilt and accept the peace he's longed for? Can they surrender their past pain and embrace healing together or will fear and doubt ruin this second chance at happiness?


Excerpt:
Payne and Ellen lingered over their food. He explained he was working in Africa and admitted he’d just arrived in Ireland when they met. “I’d been traveling for about two days with hardly any sleep, but it’s better to stay awake a while before crashing. I adjust to a new time zone faster…with less jet lag, too.”
“So those were safari clothes you wore yesterday, and you tried to stay awake by picking a fight with a stranger in a café.” She smiled at him as though she’d just given the correct answer in a board game.
He shook his head. “Huh uh. I stayed awake by talking with a beautiful woman.” He leaned his forearms against the table.
She blinked twice. Was he flirting with her? She wasn’t sure. A warm tingle rose from the bottom of her stomach, grabbing the breath from her lungs and stealing her smile. She searched for something to say. “Ah. Now I find out you’re a flatterer, too.”
“Wrong. I don’t flatter. I say what I mean. Always.”

Hope is giving away 1 E-copy of Irish Encounter, so leave a comment and include your email address!

However, if you don't want to wait to see if you win, you can purchase Irish Encounter at Amazon in print and for Kindle.


Well friends I certainly hope you enjoyed today's spotlight. Hope will be back in April with her PBG title, Mars with Venus Rising so be sure and visit weekly for more Saturday Spotlights, Tuesday Treasures and Thursday Thoughts!


Posted by Pamela S Thibodeaux at 2:30 AM

This book sounds great. I really like your writing style, Hope!
My email...wendy@wendydavy.com

Love the excerpt and the blurb. Sounds like an emotional but entertaining read. Congratulations!

Thanks so much, Wendy! Alicia, my oldest daughter said she cried at one point, but she's an easy mark. All of the sad stuff happens in the past! Part of the story takes place in Galway, one of my favorite cities. If you've never been, Irish Encounter, is a nice way to discover it. Thanks again for stopping by and reading this post!

I enjoy stories where people who aren't looking for love find it.
Your book sounds right up my alley. Thanks for posting a blurb.

I love Irish fiction, but especially adore the accent.

What a romantic excerpt! Wishing you much success with the book. :-)

Thank you, Barbara! Ellen had enjoyed a wonderful marriage and thought that was it for her. Payne had been burned by a negative relationship and didn't want to venture down love's path again. Both were surprised by what God had in store for them. I'm glad you visited the blog today!

Sheryl, I enjoy Irish stories, too, and I especially love traveling to that beautiful country. Thanks for commenting today!

Leah, thank you for your good wishes. I'm so glad you liked this short excerpt. Despite his early bad experience with love, Payne is a romantic at heart. That side of his personality blossoms and shines as he opens his heart to Ellen. Thank you for reading the blog today!

This sounds like a wonderful set up for conflict and romance. I love the cover! Good luck in all your endeavors.

Thank you so much, Susan. Yes, they have conflict but not more than Payne can handle! I was happy with the cover, too!

I love Ireland. That's a terrific setting for a fun book. Thanks for sharing. Cheers

Thank you, Marissa and Marilyn! You're right. Galway is a great setting for a story!

Hi Hope, what a terrific excerpt! Hugs and prayers for much success!! ❤️🙏

I love reading and writing Irish love stories! Such a beautiful country! We just visited Galway this past October and hope to return someday. Thanks for sharing this!

Thank you for your comments, Tanya! MJ, I visited Galway for the first time in October, too. It's a wonderful city anytime. Thanks for stopping by!

Very interesting sounding book and setting. So glad I had a chance to stop by and meet this(new to me) author :-)
Please put my name in the hat and don't pull out a rabbit or anything else besides my name, please °¿°
Janice jsmithg(at)hotmail(dot)com Thank you!

Janice, thank you so much for stopping by. Mars, PA, is a real place, and it is very interesting!