Today I'm excited to bring to you a guest post for Tuesday Treasures! 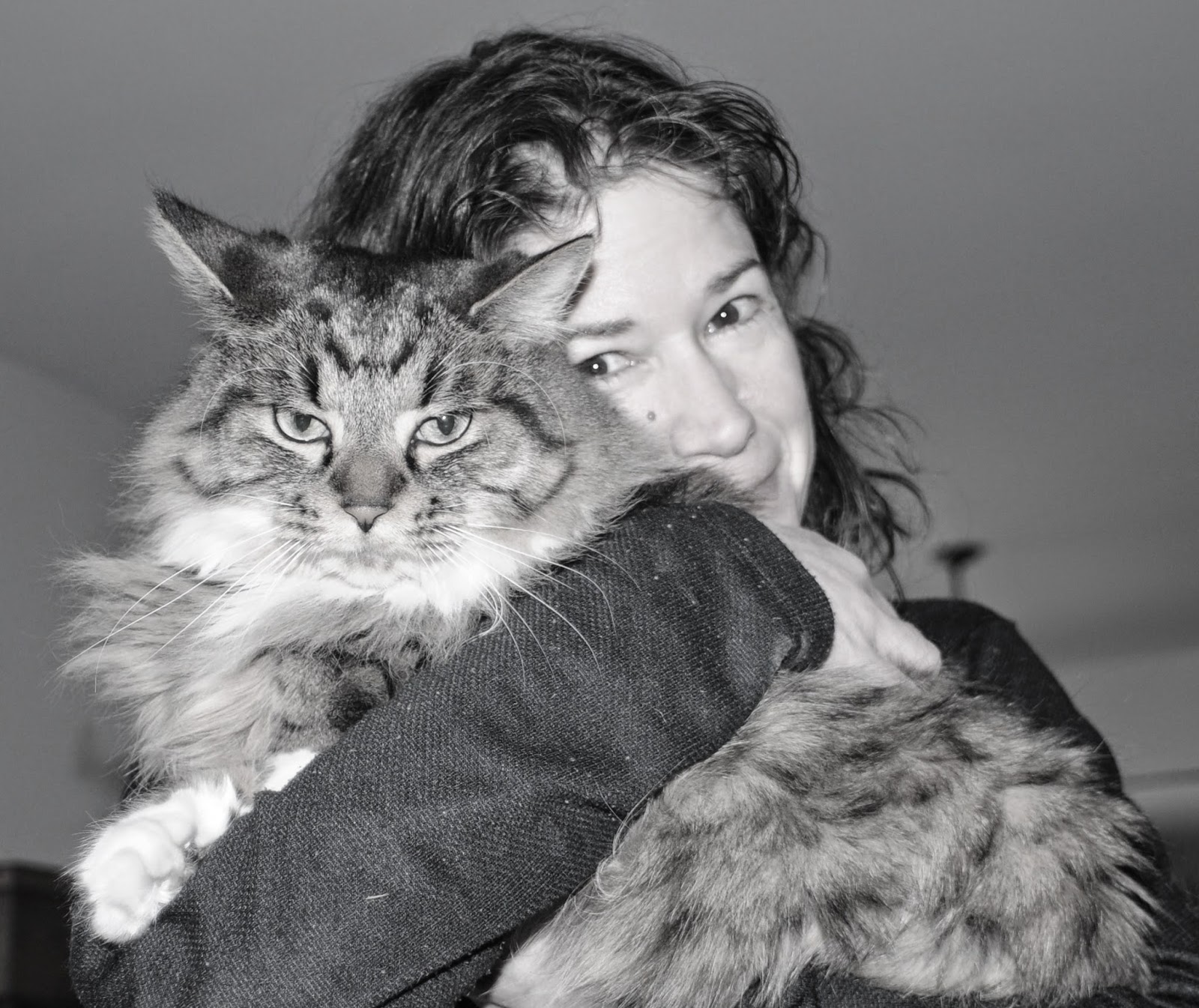 Amy L. Peterson became a stepmother in 1994 after unwittingly falling for a guy with four greatkids, ages three, five 13 and 15.  Unable to find any other humorous, touching memoirs about step motherhood, Amy wrote From Zero to Four Kids in Thirty Seconds.  Filled with 70 tips, it’s a helpful, fun read.

At the same time Amy was getting used to becoming a stepmother, Amy’s husband, Mark, was bringing various critters home. Something Furry Underfoot is Amy's humorous, heart-warming memoir about raising frogs, iguanas, hedgehogs, ferrets, hamsters, mice, gerbils, guinea pigs, dogs, a stray cat, a domestic duckling, rabbits, mynah birds and tropical fish.  The animal antics in this book will keep you laughing and the tips will teach you something about pets and pet lovers you probably didn’t know.

Way back in the day, Amy was published in numerous magazines. She now does blog postings about nature, pets and life at www.amylpeterson.com, many of which feature some eye-catching photos. She works for the state of Michigan and lives with her husband and a variety of fuzzy animals.


Pets…and More Pets
I treasure pets because they don’t talk back, they have simple needs compared to say, a retired husband’s constant need to find and buy new fishing lures, and they give unconditional love.  Take my one-year-old lhasa-bichon dogs named Winston and Snickers.  They greet me every day from work as if I was the most fun and interesting person on the planet.  They’re fuzzy brothers that look like they’re made from bags of painted cotton balls. I drove from Michigan to Pennsylvania to get them because my husband, Mark, didn’t want to be alone during his retirement and because he wanted the same lhasa-bichon mix as our two previous dogs—Dusty, the Angel Pup and Little Dipper.  So it’s great, walking in from work to wags and wiggles and lots of fuzz.  I take off my coat, sit on the floor and Snickers jumps in my lap for his rub-down while Winston runs off to get a toy I must throw an undermined, varying amount of times before the two pups start playing together. 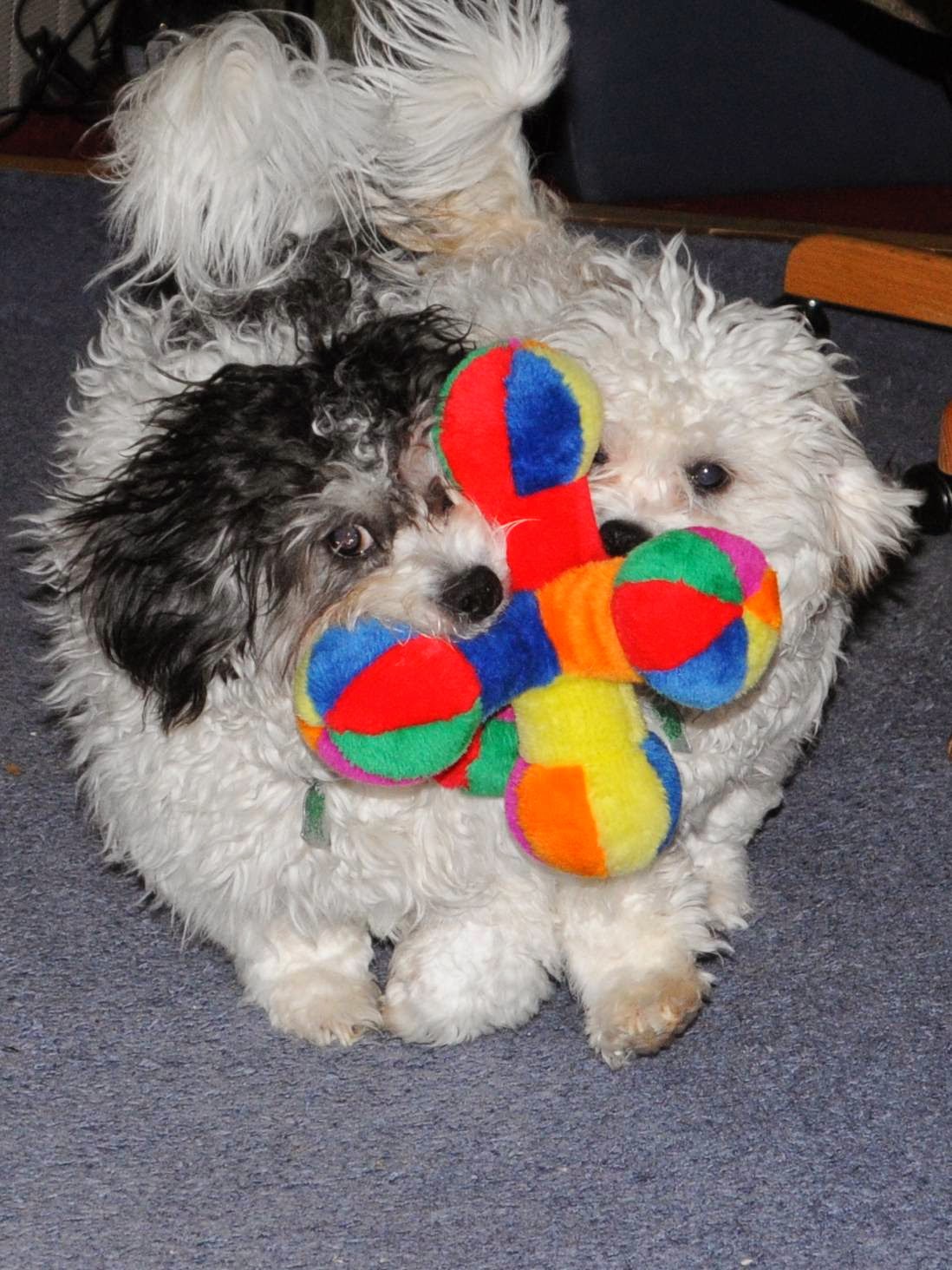 Free from my fluffy pup attack, I turn my attention to Purrkins, our middle-aged, formerly stray cat.  He exudes the typical attitude of a cat, coming up for “snugs” whenever he wants, and walking in front of me when he wants to guide me to his empty food bowl or to the bathroom sink for the freshest of fresh water.  My theory is that since Mark and I get fresh water out of the tap, our cat should too.

After a work-out, dinner and a walk or more play time with the pups, I check in on the hamsters.  We have four hamsters now, which is down from the 13 we had a while back, courtesy of the fact that a female hamster Mark brought home was pregnant and well, why not keep all eight babies, he asked?  The thing about hamsters is that males don’t like each other and have to be separated, and sometimes females don’t along with each other, either, so that meant we had a LOT of hamster cages at one time.  Having 4 hamsters is a good number, and they get spoiled with a wee run in their exercise ball, followed by “sunflower seeds from heaven,” which is simply feeding them seeds through the holes in the top of their cages which they reach up for…as if reaching up to heaven, says Mark. 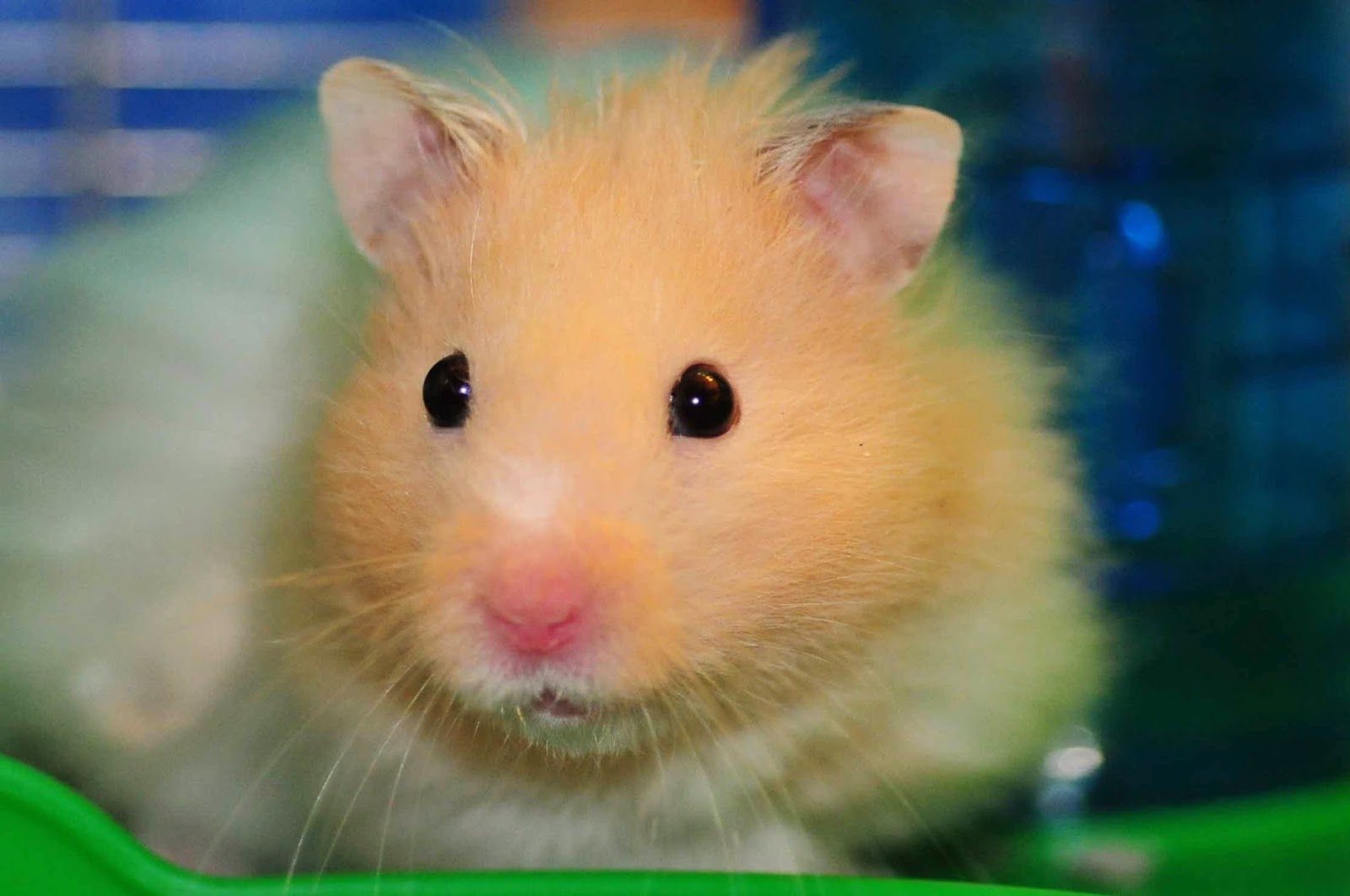 In the same room as the hamsters are two mynah birds, one of which is named Buddy, the other BOGO.  Mark really only wanted one mynah bird, and one day a couple years ago I found myself driving an hour and a half to pick the bird up at Detroit Metro Airport. It had flown in on a flight from Florida in a small cage with a brown banana and a small container of water.  After thrashing around its cage all the way home, we took the smelly bird to our Hamster-Bird room.  It flew around, took a nice, long bath, and in no time, the bird we named Buddy was adjusted to his new digs.  A month or so later, we got a call from the local post office saying our mynah bird had arrived, a fact that was puzzling since we hadn’t ordered another bird.  We called the breeder in Florida and learned the second bird was supposed to have gone to Alabama. Since the new bird had been in a cage and on endless numbers of trucks for 36 hours, the very thought of it repeating its journey made us offer to buy the bird from the breeder.  Luckily, Buddy and BOGO get along most of the time. 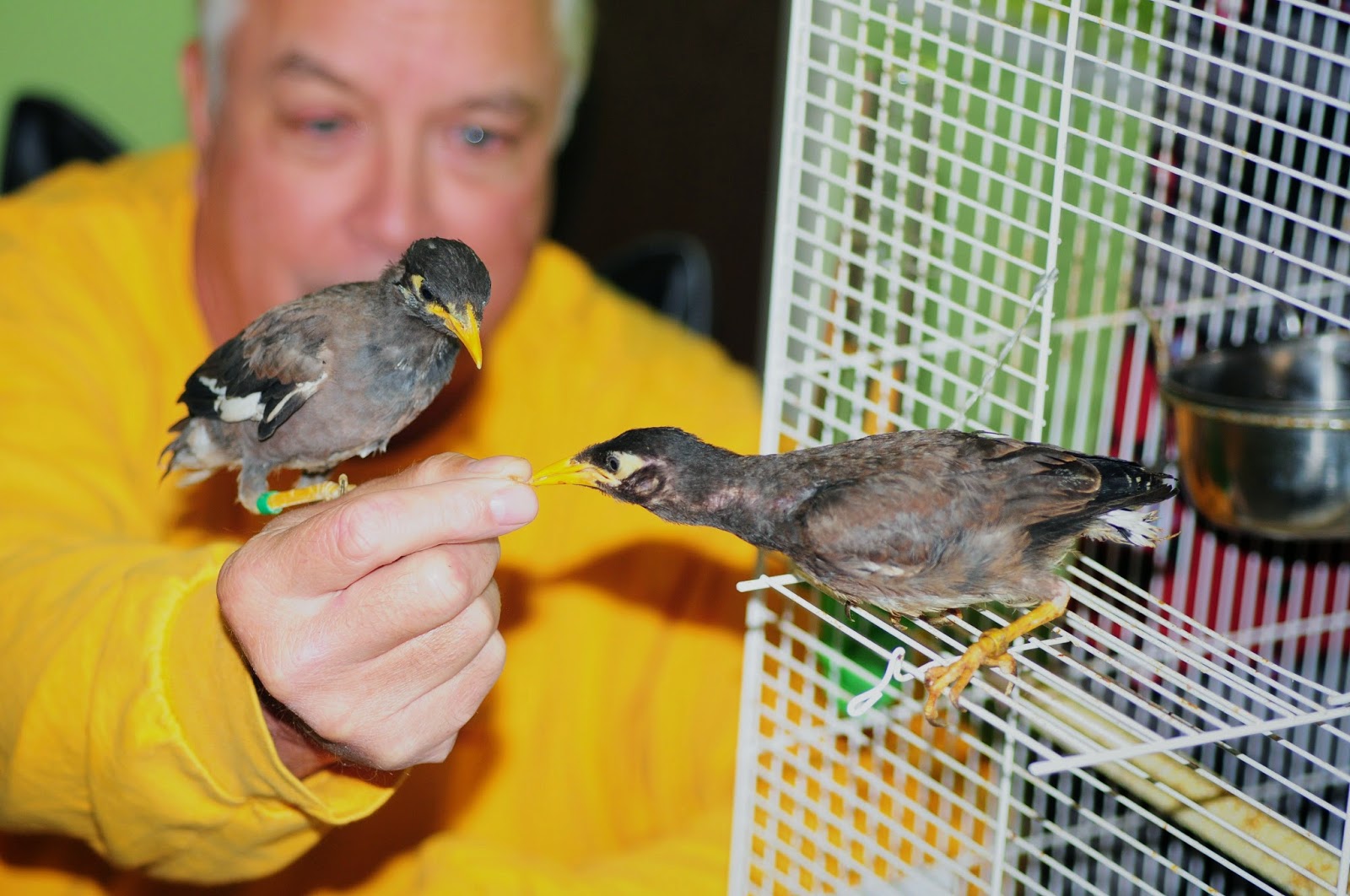 That’s how things go in Something Furry Underfoot, my humorous, touching memoir about raising pets my husband always wanted, along with a few others that showed up unexpectedly.  Mark started with frogs and iguanas which got permanent homes elsewhere, but the next pet—a female hedgehog—came to stay. She was followed by a male hedgehog we should have named Houdini because he escaped several times from his cage to father several unplanned litters of baby hedgehogs.  Ferrets came next and we had four of those before the first puppy, Dusty, came along.  Dusty had so much energy my husband’s solution was to get another puppy we named Little Dipper. The two blind guinea pigs came as a pair; the mice, gerbils and hamsters came singly or in pairs; the rabbits came in a set of five; the domestic duckling by itself; and the stray kitten was solo, too.  My book covers about 19 years and includes 50 tips about pets and pet owners, including Tip #31:  Fleas jump more than rabbits and Tip #48: Even fish can be stressful. You can find Something Furry Underfoot at Amazon.com as a paperback and e-book, and in a variety of e-book formats on Smashwords.com.  You can some cute photos and videos of my pets at www.amylpeterson.com.

Some proceeds of Something Furry Underfoot will benefit animal rescue organizations.


Wow sounds like a great book for pet lovers young and old alike!

Hope you enjoyed this Tuesday Treasure. Stay tuned for more great treasures to come as well as Thursday Thoughts and Saturday Spotlights!

Until later take care, God Bless and remember.....Love comes in all shapes and sizes and sometimes has fur.
J

The team that works at Stirlingcollies.com are experts in the field of dog breeding and have years of experience in understanding and fathoming the needs of dogs, to ensure that the dogs turn out to be healthy.
http://www.geekswithblogs.net/StirlingCollies/Default.aspx

I just want to thank you for sharing your information and your site or blog this is simple but nice Information I’ve ever seen i like it i learn something today.  Pet guest posting website