It's been a long time since we had a Saturday Spotlight. As you know I've taken a break from regular blogging, choosing instead to update you on my life in a "nutshell".... so here it is.....

The Wordsmith Journal Magazine has grown by leaps and bounds! We've brought on a team of reviewers, a few more columnists, a new sponsor! I've uploaded the Oct/Nov issue (recreated), and the Feb & March issues up on Kindle, Nook & ISSUU. They are also available as a download from the site! I am working on the April issue as well as re-creating the Dec & Jan issues. Whew! One day I'll be caught up LOL!

In my last post, I mentioned that I submitted Circles of Fate to Harbour Light Books - well they requested a full manuscript! Seems like FOREVER since I submitted something new so I'm soliciting all the prayers I can get LOL!

And that, my friends is my life in a nutshell!

Now without further ado...onto our spotlight.....

Richard Paa Kofi Botchwey is an ebullient multi-genre Ghanaian Writer, Poet, Speaker and a Photo Journalist. He has been writing since the age of fourteen and has several works in progress. He was born in Appiakrom, Bogoso in the western region of Ghana. At ages five and seven, he lost his father and mother respectively. But that did not discourage him; instead he encouraged himself to reach the top. Today, he is living a fruitful life and fulfilling his God-given purpose of being an answer to someone’s prayer or need. His poem, Life lessons was published in Rising Artist Magazine in April 2009 in USA. In January 2011, he was invited to read his poetry on Writer’s Project on Citi 97.3fm (citifmonline.com) and was welcomed with his poems: Kiss of Death, The Soon Drama and The Muted Island. He has also been on Open Air Theatre on Radio Universe 105.7fm with his inspiring poems: Give up Not, The Choice is within us, A Time comes & A Time goes and Today won’t mirror Tomorrow. Being an orphan has empowered him to rise and advocate for the orphans around the world. He is the voice for the voiceless and hope to the hopeless. He reminds you that, “When you keep blessing others, your light will keep shining.” 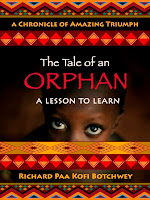 This book is about life. How painful and beautiful it can be. It is a lesson teacher as well as a comforter. It is an encourager as well as a chastiser. It is a journey through a storm with a triumphant ending. It is a book that can help change the world; a spellbinding memoir of childhood aching sadness and desperate humor. It is a testament which makes you believe, in spite of poverty and death, there is hope for the future. This chronicle of amazing triumph against all odds will help you understand life properly and live to be a blessing to the world.
Foreword
“The eagle makes its nest in the valley, knowing its wings will allow it to soar to the mountain tops.”
Rejoice for an orphan has become a king. From his pit of sorrow and anguish he has risen with a crown! The lips of the wicked have been silenced. Those who oppressed him are now speechless. Look God has done it! From his pit he has risen. His sorrow turned to joy. His pains turned to comfort.
The earth trembles. The angels rejoice. His friends sing to the Lord. An orphan made king! An orphan made king! The slaps were a sounding to the world of greatness. His beatings were a sounding to the world that he is blessed. Look he cries no more. The Lord has wiped away his tears. The Lord has wiped away the tears of his family.
They hunger no more. They sit at the table together to feast. The pestilence that once plagued them is gone. Their strength has been renewed. Their spirits have been made strong. No longer do they sleep on the streets. Abandoned buildings and gloomy huts they no longer stay in. For the Lord has made a king in their family. The Lord has made the weak and voiceless of the earth strong.
From the bottom of a pit a king has risen; to teach the world the way of the Lord; to be a light in dark times. The years of torment have passed him. Yes, blessings and prosperity is his now and forever. An orphan made king! An orphan made king! Give praise to the Lord for an orphan has been made king.
-Emmanuel Young
Author of “The Psalms of a Warrior’s Heart”
Owner/CEO of “E-Magine Publishing”
WHERE YOU CAN BUY A COPY:
WWW.AMAZON.COM   :
http://www.amazon.com/The-Tale-Orphan-Lesson-ebook/dp/B007MD8X3Y/ref=/ref=cm_cd_f_pb_t
WWW.KOBOBOOKS.COM  :
http://www.kobobooks.com/ebook/The-Tale-Orphan-Lesson-To/book-RsusL9EI30eVB6o_Af4wzw/page1.html
WWW.BN.COM
http://www.barnesandnoble.com/w/the-tale-of-an-orphan-emmanuel-young/1108888696?ean=9780985075927&itm=2&usri=the+tale+of+an+orphan
http://www.e-maginepublishing.com
http://www.rbotchwey.blogspot.com
http://www.itunes.com
Thanks for taking the time to stop by.
Until later take care & God Bless!
PamT
Posted by Pamela S Thibodeaux at 2:01 AM

Email ThisBlogThis!Share to TwitterShare to FacebookShare to Pinterest
Labels: 2012 nca/nda collegiate cheer and dance championship, circles of fate, harbour light books, my life in a nutshell, Richard Paa Kofi Botchwey. the tale of an orphan, the wordsmith journal magazine