I'll be over in Alexandria, Louisiana today for a book signing at Hastings Entertainment 1460 McArthur Drive so if you're in the vicinity, drop on in!

IMW, please welcome JoAnn Carter back for another edition of Saturday Spotlight with her book, By the Book. 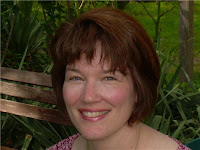 JoAnn Carter lives in Vermont with her wonderful husband of 17 years, four children and Ginger, the best dog in the world. She enjoys being with her family & friends, writing, reading, and cooking. On the side she also writes book reviews for her local Christian radio station, THE LIGHT RADIO NETWORK.


In the past JoAnn has worked as a Licensed Practical Nurse, and as a substitute teacher. This year however, she is at home, to home school one of her children.

Perky 24 year old police dispatcher, Sarah Murphy, is held captive by images of her past. She doesn't trust men and is determined to hold onto her heart at all costs. Meanwhile, Lieutenant Dylan Eldredge of the Hampton Police Department believes she’s the woman God has intended for him and is equally determined to have her for his wife. Will he be able to prove he’s the man for her?

Sarah swiveled her chair so she could face Helen. "Now, what were we saying?"

Helen grunted and pushed her thick glasses up further on the bridge of her nose. "Independence," She remarked dryly. "Have you ever stopped to consider, being able to depend on someone other than yourself might not be such a bad thing?"

Here we go again, Sarah gritted her teeth to keep from saying something she would regret later. She picked a piece of lint off her pants. "You're right."

"I know I'm right." Helen's eyes widened as if Sarah had a temporary loss of her senses. "But in the five years we've worked together you've never agreed with me before."

"That's because you've never quite said it that way. But where man will fail, God will not. He is the only one I ever want to depend on." Sarah put her headset on and watched the monitor's black blinking cursor.

With a groan, Helen put her head into her hands and murmured, "Back to square one!"

Sarah lowered her eye lashes, "Helen, honestly, I like my life just as it is." Sarah knew the concern she saw in Helen's eyes was for her. However, she also knew men were on a whole were a problem, not a solution.

"Fine. But, I don't understand why you won't even entertain the thought of dating someone."

Sarah swatted at the finger Helen had pointed at her nose. A spurt of anger drew her chin up a notch as she wondered why, of all times, did the radios need to be quiet now? "I'm happy. Why spoil it?"

By the Book as well as JoAnn's other titles are available NOW at White Rose Publishing!

Well Friends, hope you enjoy this spotlight - stay tuned each week for more great authors and their books!

Until later take care, stay in touch, BE BLESSED and remember....the kingdom of God is within and that kingdom is righteousness, peace and joy in the Holy Spirit!

I hope you have fun at your book signing!

Thanks for having me here again~
JoAnn

Hope you have a great turnout today.
PamT

Hi JoAnn! I had to pop over here to tell everyone that I absolutely LOVED your book! It was one of those books I couldn't stop reading because I couldn't wait to see what was going to happen next. I won't put any spoilers in here, but I loved the ending. :) I can't wait for summer to get here so I can read again. Six more weeks and counting... lol! Hope you have a great turnout too. I'm off now to a Spring Fling at school.
Theresa Lynn Hall

God bless you with lots of readers at your book signing Pam!

Joanne, your book is wonderful! I enjoyed it tremendously. For anyone who hasn't read it, get yourself a copy and sit down and enjoy!

Theresa & Donna, I'm so glad you enjoyed the story!

JoAnn, I enjoy your books so much - I wish you continued successs and blessings. Same to you, Pam! Good luck at the signing - hope it goes well!

JoAnn loved the interview.
I am looking forward to reading your book. I'm glad no secrets sneaked out!

Mary, I noticed you're from Vermont too.

We live about a half-hour outside of Burlington. Where about did you live?