I greet you from the glorious hills of Bandera, TX. Back at the Silver Spur Guest Ranch for The Wild Rose Press's "Back in the Saddle" writer's retreat. Always wonderful to be back here.

As you can see, I'm still not blogging regularly but hey, with The Wordsmith Journal Magazine, writing and editing my books as well as paid editing projects and building websites, I'm kinda busy LOL!

In case you missed my last post, I recently released a short story, Lori's Redemption which is available on Kindle, Nook & Smashwords!

And that, my friends is my life in a nutshell. So without much further ado, I bring to you our guest, Janis Patterson!

I Kill People, She Said With A Smile

It’s not that what I do is really so bad, it’s just that I enjoy it so much! When someone asks me what I do, I smile very sweetly, give them my best grandmotherly twinkle and say in soft, mellifluous tones, “I kill people.”
No one has run away yet, though I have had an interesting series of yelps and squeals.
It’s true what they say on Castle – only two types of people sit around trying to think of ways to kill people – psychopaths and mystery writers. I write mysteries.
The big question is, why do people read and write mysteries? In a world full of horror and bad news and economic tragedy, why do people choose to read books about murders? I think the answer is two-fold.
First of all, most of the population is personally untouched by the horror of murder; they’ve never lost a loved one to violent crime, so there is none of the visceral personal horror about a murder.
Second, while everyone can appreciate the feeling of revulsion at a murder, there is an equally strong pull of fascination. Morbid? Perhaps, but very human.
I like to write mysteries. (Does that make me weird? The Husband says so…) I like the puzzle of it – the old journalistic who, what, where, why and how. I like the challenge of not only creating the puzzle, but of doling out little bits here and there, just enough to give the reader a reasonably fair chance of solving the mystery. Sometimes, though, even I don’t know who the killer is until the final few chapters. I might think I do, but the characters have different plans!
In last year’s THE HOLLOW HOUSE (Carina Press http://bit.ly/O1x30d - Amazon http://amzn.com/B005UPRN14 ), I knew the killer from the beginning. Yeah. Sure I did. At least, I thought so. By the middle of the book I had no idea of who had done it. By the last three chapters I was starting to sweat and having wild fantasies of using that hoary old standby, the convenient wandering homicidal maniac. Then all of a sudden it all fell into place. The killer was someone even I had never expected, but it all fit so well! I was delighted, but then thought despairingly of the work involved in going back through the entire book and put in some clues so I could play fair with the reader.
Okay… I went back through the book, and to my astonishment they were already there. The lead-up was flawless. (Cue the Twilight Zone theme….)
In this month’s release BEADED TO DEATH (Carina Press http://bit.ly/SjFrXM, Amazon http://amzn.com/B007M8S2T4) the denouement was much less dramatic, even though I wasn’t sure of the killer until about halfway through the book. Also, there was less emotional investment in the victim. In THE HOLLOW HOUSE the victim was a real character, someone whom the readers had come to know. Also, the murder didn’t happen until about one-third of the way through the book. (There was lots else going on, though!)
Then, having been told that the murder should occur in the first chapter to be a ‘real’ mystery, I decided to try it. Normally I hate rules like this – just about any ridiculous rule, if you must know – but it seemed like a good writing challenge.
In BEADED TO DEATH bead artist Lilias Ruiz returns home from a tour of selling her wares at craft fairs. She unlocks the door to her house, turns off the alarm system and then finds the body of a man she’s never seen before on her living room rug. And that’s the last we see of the victim, though his presence in her house sends shock waves through her life. Before things are resolved, Lilias is reluctantly involved with drug smuggling, an FBI agent who may or may not be rogue, and a 7’3” nephew on the run from an unwanted basketball scholarship.
Whether the body is found early or late, though, it’s always done with reasonable restraint. Despite an addiction to CSI, I don’t do graphic. In one of my books you’ll not see the blood splattering (metaphorically) or on-page cruelty. No knives parting flesh, exploding body parts or the like. You might see a lip of red spreading from under a blanket, or an ugly smear of red on a wall, but that’s about it.
The Husband calls it ‘tasteful murder.’


And I suppose that’s as good a tag as any. 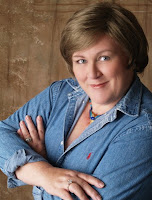 Formerly an actress and singer, a talent agent and Supervisor of Accessioning for a bio-genetic DNA testing lab, Janis has also been editor-in-chief of two multi-magazine publishing groups as well as many other things, including an enthusiastic amateur Egyptologist.
Janis married for the first time when most of her contemporaries were becoming grandmothers. Her husband, also an Egyptophile, even proposed in a moonlit garden near the Pyramids of Giza. Janis and her husband live in Texas with an assortment of rescued furbabies.

Well friends, hope you enjoyed this edition of Saturday Spotlight. Stay tuned Tuesday for a book launch for Tracy Krauss.

What we perceive as a disappointment may actually be a Divine Delay.

"Inspirational with an Edge!" (tm)

Email ThisBlogThis!Share to TwitterShare to FacebookShare to Pinterest
Labels: beaded to death, inspirational with an edge, janis patterson, my life in a nutshell, mysteries, pamela s thibodeaux, the hollow house