As I mentioned Tuesday, I am on a min-vacation in Pigeon Forge, TN but as promised we have a special guest today for Thursday Thoughts!


Often, when I’m speaking at library or bookstore, someone in the audience will remark, sadly, that they always wanted to write but never got around to it and now they are too old. It gives me a chance to talk about my late mother, A. Carman Clark. Always a columnist, country-living writer, and mentor, as well as an avid reader, in her seventies, she complained to her local librarian that she couldn’t find any mysteries to read. Too many of them, she thought, were too full of blood and gore and violence to appeal to an older reader. Others featured characters who lifestyles and tastes were so lavish that they felt unreal to a frugal Maine woman. 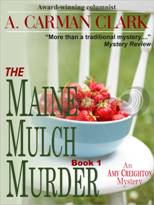 After listening to her complaints, the librarian replied, “Well, Mrs. Clark, if you don’t like what our library has to offer, why don’t you write a mystery of your own?”

And so she did. At the tender age of eighty-three, my mother published her first Amy Creighton mystery, The Maine Mulch Murder, http://amzn.to/1N6dO2w featuring a 60-something freelance editor, a body in the sawdust shed discovered when she went to get sawdust to mulch her strawberries, and a local constable who was her long-ago first love.

I like to share this to show that if you dream of writing, it is never too late to chase that dream.

Kate Flora is the author of 14 books. Her titles include the star-reviewed Joe Burgess police series. And Grant You Peace won the 2015 Maine Literary Award for Crime Fiction. Redemption won in 2013. Her nonfiction includes the Agatha and Anthony nominated true crime Death Dealer, and Finding Amy, co-written with Portland, Maine deputy chief Joseph Loughlin, which was a 2007 Edgar nominee. With retired Maine game warden Roger Guay, she has co-written a memoir, A Good Man with a Dog. Her next Thea Kozak mystery, Death Warmed Over, will be published in 2016.

A former Maine assistant attorney general in the areas of battered children and employment discrimination, she’s a founding member the New England Crime Bake, the Maine Crime Wave, and a founder of Level Best Books. She served as international president of Sisters in Crime. Flora teaches writing for Grub Street in Boston.

How inspiring! I agree with Kate, it's never too late to chase a dream, or build a new one! No matter what challenges you've faced in the past, God always has a great plan for your future and the 'future' begins every morning!

Something to think about!!"Inspirational with an Edge!" (tm)
Posted by Pamela S Thibodeaux at 2:30 AM