Whew! The title of this post is a tongue twister for sure LOL!

I have reveled in a passion for purses many years. I enjoy all kinds. You name it and I'll claim it. My curiosity and wildly growing peronal collection led me to investigate the world of purses. That resulted in my new mystery novel Kat Out of the Bag, introducing Katherine Watson celebrated international purse designer and amateur sleuth.

Why do women love purses? I had my suspicions, of course. I followed many clues. I devoured everything there was to read about designers. I researched art appreciation. But it was when I interviewed every day women about their favorite purse, and learned about their incredible lives and families that's when I knew I was hot on the trail to uncovering the mystery of a passion for purses.

I met with a variety of women who enjoy purses. Their favorite purse, the one they told me all about,  was often a special gift, maybe a family member, loved one, friend, or mentor. Sometimes their purse was a style similar to another woman's who they'd known. Often it evoked a cherished memory, like an aunt who had a purse pocket with surprise candy treats for kids. There was a sisterhood here.

For some women their favorite purse represented a cause that they supported wholeheartedly. They were wearing their heart on their arm, or sometimes crossbody.

No matter how contemporary, these stories had roots in history. Yes, a woman's purse tells a story, that's unique and at the same time shared. The final piece of the puzzle fell into place. I traveled from Seattle, Washington to Little Rock, Arkansas to visit one of only three purse museums in the world – Esse. The ESSE Purse Museum does not simply showcase accessories. It makes HERstory tangible and familiar. ESSE is focused on honoring women, artisans and the stories that make us unique and connected.

Mystery solved! And my novel underway, about Katherine Watson the purse designer. She creates purses because it was a passion that her great grandmother had shared with her when she was a young child. It was then she learned  inside every purse there's a treasured story of the woman who carried it, and those stories are important. When Katherine ends up temporarily back in her hometown of Bayside, she decides to create a purse museum in honor of her great grandmother, and all the women who's stories would be told in the exhibits. Never did she imagine that the mayor would be murdered at the Gala Opening.

My character Moonjava is a fan of the hippies of the 1960's. She's also the museum historian. She loves the idea of showcasing history in creative exhibits. She shares a daily meditation with anyone who will listen, often with interesting repercussions.

Amber is the college student who manages the museum gift shop. She's a wristlet gal. She stumbles on her own cold case mystery when she and her boyfriend Michael find a note in a donated vintage purse.

While Michael and Amber partner on their cold case, Katherine finds herself investigating the murder with, and sometimes at odds with local cop Jason Holmes and his K-9 partner Hobbs. Jason ends up learning some things about purses as the mystery deepens. 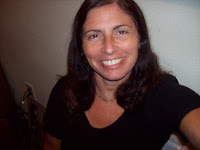 Wendy Kendall has a passion for purses and stories of the women through history who carried them. Her cozy mystery Kat Out of the Bag is the first book of the In Purse-Suit Mystery Series, introducing Katherine Watson an international purse designer/sleuth. Wendy is a blogger, editor, speaker, project manager, and syndicated columnist. Catch exciting author interviews on her YouTube Podcast—A Novel Talk, and the debut of her podcast – Wendy Kendall In Purse-Suit of Fashion. She loves her two sons, Alex and Brad and her Purrada cat.

Find out more and connect with Wendy by visiting her Website – Wendywrites.org

Columns – Recommended Reads and Kids Are Bookin' It 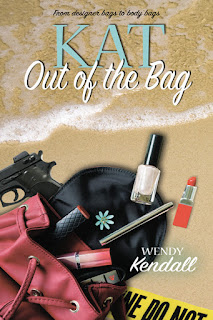 When celebrated international purse designer Katherine Watson hosts a gala for her Purse-onality Museum, she never expected the next day's headline to read: 'Murder at the Gala Prmiere.' But after a dead body is found during the event, that's exactly what happened.

Working to solve the murder, Katherine matches wits with local cop Jason Holmes and his K-9 partner Hobbs. Although Holmes and Watson disagree often, they discover an undeniable attraction building between them. But they'll have to put their feelings on hold and focus on solving the murder, before Katherine becomes the killer's next knock off.

“There's an officer nearby. We'll alert him. Hold the line.”

Katherine was worried by the operator's monotone. Did she understand the urgency? Katherine watched in disbelief as the shadow figure moved toward the shed attached to the waterwheel. Too late, she thought to get a picture after the person disappeared inside the shed.

“Oh no,” Katherine muttered. She spoke into the phone, “Hurry, I think it's the killer, maybe looking for something left behind? Hello?” Had the operator hung up?

“Yes, the officer is on the way. Please stay on the line.” The operator's voice now sounded bored.

A sharp ray of light from inside the shed cut through the darkness. The light jumped around. Sweat collected on Katherine's upper lip as she imagined the killer looking through her things for something, maybe critical evidence. Fear gave way to irritation at the invasion. Irritation gave way to anger. Someone had to stop that killer from removing whatever incriminating thing was so critical it had driven a return to the scene of the crime. Katherine wanted to scream. Where were the police? Maybe MJ was right about them. She pressed against the french doors. The light in the shed went out. Her breath caught in her throat. The silhouette walked out of the shed toward the alley leading to the maze that burrowed throughout Bayside and beyond.

Katherine spoke gruffly and fast, “Hello. Where's your officer? The suspect is getting away.”

“Ma'am, please stay calm and hang on the line. They're on the way.”

Katherine unlocked the door to the yard and whispered to the 911 operator, “I'm in pursuit.”

Kat Out of the Bag is available on Amazon

Purse-Stachio Makes A Splash is available on  Amazon

Such an interesting post, Wendy and great premise for your books/characters! I'm not a huge fan of purses, mine is a usually a black one, on the smaller side.

Wishing you the best of luck and God's blessings.

Posted by Pamela S Thibodeaux at 7:22 AM

So nice to meet and read about you. Great peek at your book D. V. 🦉

We women and our purses! What a great starting point for a novel. Congratulation on the book!

Such an interesting concept! Love the originality. And Watson and Holmes? Too clever. Best of luck with it!

Such a cute and creative idea! Love the title. Thanks for posting!

Such a cleaver title. Sounds like a lot of fun.