Please welcome Penny Marcez as she shares some thoughts about a craft she thoroughly enjoys.... 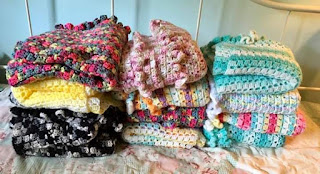 I learned how to crochet at the age of eight. That year my mother,  pregnant with my youngest sister, came close to having a miscarriage. Her doctor ordered her to spend the rest of the pregnancy on bedrest. So, Mom taught me to crochet. She also taught me to embroider, but I enjoyed crocheting far more. My mother gave birth to my sister and never crocheted again. I continued to crochet off and on—making afghans, hats, scarves, and baby sweaters. During various crises in my life, I discovered crocheting was a calming activity for stress.

One of my dearest friends, who lives in another town, joined a crochet group there. However, she didn’t know how to make hats. One day, she drove to my house and I showed her how to make a simple hat. She proceeded to make a thousand hats. But then her crochet group learned of a need for baby blankets and they decided to focus their efforts on that project. My friend wanted me to teach her how to make a baby blanket. She couldn’t get the hang of it. She handed me the yarn and asked me to make the blanket. So I did.

Then her crochet group learned of a need for prayer shawls. Again, my friend gave me yarn. I made several prayer shawls for her group.

Then I was diagnosed with breast cancer.

After finishing my cancer treatment, I decided our church needed a prayer shawl ministry. I took on the job and found there were many talented knitters and crocheters in our church who were delighted to get involved.

And then came the pandemic.

As the old saying goes, “It’s an ill wind that blows nobody good.” Our church was closed, but with the lockdown the ladies of our ministry devoted more time than ever to crafting prayer shawls as well as lap blankets. Stores were closed, but they ordered yarn online. Their fingers never stopped moving. The production rate soared.

We could not use big closet in the Parish Center where we usually store our work. That was no obstacle for the women of our ministry. They left their prayerful creations at my backdoor. It didn’t take long for my dining room to be overwhelmed.

But with everyone in lockdown, nobody wanted anything which might be contaminated with coronavirus, though all the items were washed and bagged in plastic. However, everyone wanted masks because none were available. Some of the women in our ministry—who also like to sew—began making masks. One of those women contacted the director of a nearby service organization who was willing to take some blankets and shawls for the elderly. I was delighted to clear out some of the shawls and blankets in my dining room.

Another woman in our ministry had a friend from a respite home for women undergoing cancer treatment. She was willing to take some of the shawls and blankets off our hands—even though her facility was closed at the time.

The neighbor of one of our prayer shawl ministers belonged to the Methodist church just up the road. She suggested we join in to help them meet the goals of their projects for preemie hats and blankets, soap sacks, toddler blankets, and children’s winter hats. What fun! The women in our ministry joined theirs and three hospitals in the area received preemie blankets and hats. A local day care center received blankets for all the children, too.

Last, but not least, I remembered a contact I knew at a nearby nursing home. I asked her if she needed some lap blankets for the elderly clients in the home. She accepted them and said she’d be willing to take more.

I cleared out the dining room and breathed a deep sense of relief.

Then, one of the prayer shawl ministers sent me an email. She had three more blankets for me.

No one in this county will be cold this winter. 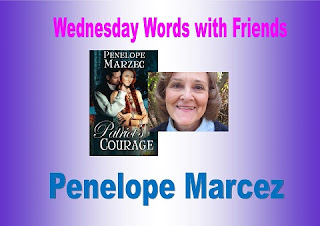 Penelope Marzec grew up along the Jersey shore. She started reading romances at a young age and fell hopelessly in love with happy endings. Two of her inspirational romances won EPIC’s eBook Award and another was a finalist in that contest. Her paranormal, Irons in the Fire, was a nominee for a Romantic Times Reviewers Choice award.

Her latest release is the third book in her Patriots’ Series, PATRIOT’S COURAGE. The story is about Ryan McGowan, who vows to kill every Indian in Ohio territory in retaliation for his brother’s death. At the Battle of Fallen Timbers, he breaks his ribs and finds a white woman sobbing over a dead warrior. When the captain assigns him to teach the woman English, he resents the task, but the woman melts his vengeance away. He begins to understand the way to peace is forgiveness. Then he learns the woman carries the child of her Indian husband in her womb.

Màxkchulëns, a white woman adopted by the Lenape at the age of four, is confined at the fort and longs to return to her people. Though Ryan leads her to recall part of the faith her biological parents held dear, she struggles to understand it and the power of grace. Can she rely on that grace in desperate times? And will faith protect her unborn child as well?

Thank you so much for sharing with us today, Penelope! I know several people who loved to crochet too and although I learned to also, decades ago, it was never my thing. Who knows though....maybe someday.

Posted by Pamela S Thibodeaux at 7:19 AM

What a nice post. I never could get the hang of crocheting even though my mother and her friends crocheted. But I could knit.

I love paranormal books so I'll check out Penelope's books.

I crochet. Simple lap blankets. It's very relaxing. Best of luck with your writing. 🦉

I love to crochet too, but I'm not as prolific as your are, Penny. Congratulations on your new release. I loved the story. It was a great read with a timely message for today.

Inspirational. Thanks for sharing, Penelope.

Thanks for hosting me at your blog! I am so delighted you gave me the opportunity to put up this story about the women in the prayer shawl ministry. They are such a blessing.

Crocheting is a fine hobby. Your novel sounds like an excellent read as well. Best wishes.

What a nice ministry. I have friends who do something similar. I enjoyed reading out your book, too.

That is a wonderful ministry, and so much appreciated by the folks receiving warm shawls and blankets.

My mother used to make lap quilts. They all went to homes for disabled veterans. They were not only glad to get them, but so glad to be remembered. Lida

I can crochet, but I prefer to knit. Very relaxing.

Yes, knitting is relaxing, too. I've made a few, very simple knitted shawls. But crocheting will always be my favorite.

I've recently finished a project I started many years ago, an afghan. It became a cover for a pillow, because I couldn't let it go to waste, and so it evolved. Lately, I've started simple loom knitting because my stitching was always uneven. The simple projects harken to a simpler time in life. All my best for a successful and profitable release.
M.E. Bakos