#SaturdaySpotlight is on Raquel Byrnes & The Tremblers

It is always one of my greatest pleasures to feature a fellow Pelican Book Group author and today is no exception.

Raquel Byrnes writes across several genres including YA Steampunk, Fantasy, and Gothic Mystery. Critically acclaimed for her edge-of-your-seat stories with complex characters and heart pounding thrills, she is always looking for another adventure in which to partake. When she's not writing she can be seen geeking out over sci-fi movies, reading anything she can get her hands on, and having arguments about the television series Firefly in coffee shops. She lives in Southern California with her husband, six kids, and various reptiles. You can connect with Raquel by visiting her Website or Blog and on Twitter @raquelbyrnes 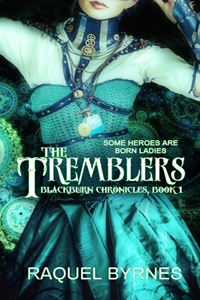 Charlotte Blackburn—Beautiful, intelligent, a gifted tinkerer—lives in a cloistered world of wealth and privilege beneath the Electric Tesla Dome that shields survivors of The Great Calamity. But when her father is abducted, and a strange sickness starts transforming men into vicious monsters, she discovers that technology is no protection at all.

Ashton Wells has a dire mission: Secure Colonel Blackburn and deliver his research to The Order of the Sword and Scroll. But the plan goes awry, and he is left with nothing but the colonel's daughter who has a target on her back and is willing stop at nothing to rescue her father—including handing over to the enemy the only means to stop the monstrous plague.

Branded as traitors, Ashton and Charlotte brave the treacherous floating sky ports of Outer City to hunt down the elusive inventor who is the only person able to activate the strange device that harbors the secret to their salvation.


With the government closing in, a rebellion brewing in the streets, and terrifying Tremblers attacking the innocent, the two must work together to stop their fragile world from crumbling once more into destruction.

Ashton Wells sprinted through the fog. It drifted in the alleyway, swirling aloft a prone figure just ahead. He skidded to his friend’s side as filament lamps sparked and sizzled in the misty night casting the grisly scene with wavering shadows.

Agent Roland Cavendish slumped unnaturally against a wood crate, eyes clenched. He panted, pain twisting his face into a grimace. “Ash, it’s darker than I imagined.” Roland coughed, pink froth bubbling at the corner of his mouth. “Blackburn. G–get to Blackburn before it’s too late.”

“Where have you been?” Ashton eased closer, his throat tight with worry. His gaze went to Roland’s chest, to the burn trail left by the charge. The heat of the surge left a dark and jagged scald along the armored vest, boring through to Roland’s heart. Crimson seeped between the cobblestones, the edges of the blood going white with frost. Ashton stifled a groan. “I’ve been tearing this city-state apart for two days searching for you!”

“My contact never showed.” Roland arched, pain wracking his body. He grabbed at Ashton’s coat with a fist. “Blackburn, he has to stop it, Ash. There is no time to waste or the blight gets us all.”

“Easy.” Ashton pulled a kerchief from his pocket using it to stem the flow of blood. “What are you talking about? Why did you disappear?”

“The Governors, keep Blackburn from them.”

“Colonel Blackburn?” Ashton asked, surprised. “Why him? What did you discover?”

“It’s the c–cold,” Roland rasped, his eyes going glassy as his hand drifted down. He opened and closed his mouth twice and was still.

Ashton eased his friend down. Standing, he pulled the tracer gun from the holster at his hip, and revved the gear works with his thumb. They glowed bright purple with a building charge. Tiny sparks arched from the weapon to the grounding rivets on his gloved hand. He had to find Blackburn.

The Tremblers - along with Raquel's other titles can be found at Pelican Book Group and Amazon!

Hope you enjoyed today's post & that you'll join me each week for Tuesday Treasures, Thursday Thoughts and Saturday Spotlight.

Posted by Pamela S Thibodeaux at 1:30 AM

Hi Raquel,
Thanks for sharing your fantastic Steampunk with us. Six kids and reptiles must keep you super busy. We had a leopard gecko for several years. My son went off to college and left me with the cricket feeding. How fun!

Raquel, your imagination is a gift. Each time I see one of your covers I can't help but wonder "How did she do that?" Best wishes to you.

I love the colors and textures on that beautiful book cover - really invites me in!

Wow, what an interesting story! Very gripping excerpt. Best of luck with the book!

Your story sounds intriguing. I pray your book works its way into the hearts of your readers. Thanks for sharing. Cheers

Congratulations on another PBG sale, Raquel! Your excerpt is great. I have to agree with LoRee. How do you do it? I'm in awe of the talent you have to create such unique worlds and settings!

Sounds like a great read and I'm intrigued. Hope you do well with your book. Thanks for sharing.

Thank you so much to all of you came out to encourage and support a fellow author! I am so blessed by you all. And thank you Pamela for hosting!

I truly admire those who can create "other-worlds" through sci-fi and fantasy. This book looks very compelling! Good luck.