Good Morning and welcome to our first Saturday Spotlight from Bandera, Texas!

Today's spotlight is author Anne Patrick with her book, Ties That Bind 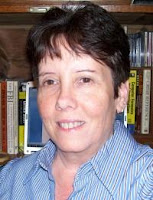 Anne Patrick, author of ‘Sweet’ Edge of Your Seat Romantic Suspense, has penned more than a dozen novels. She’s a confessed suspense junkie with a bad habit of mixing chocolate and diet colas when writing which can, and often does, lead to mayhem. Anne has an alter ego by the name of Kinzie Monroe, who writes Inspirational Romance. Anne, you might say, is the dark side of Kinzie. Anne’s books may be darker in subject matter, but they all carry messages of hope and faith.

When she’s not writing, she enjoys spending time with family and friends and traveling to other countries to experience new cultures. She loves hearing from her readers and can be contacted through her website: http://www.annepatrick.weebly.com/ or blog: http://www.suspensebyanne.blogspot.com/

Sheriff Austin Garrett enlists the help of FBI profiler, Jo McDaniels, to help him solve a string of murders plaguing his community. Unlike most profilers Jo has an unusual gift that allows her to get to know the victims better than anyone else. She not only feels their emotions; she feels their pain. But the last time she relied on her physic ability it almost cost her career as well as her sanity. As the case progresses and the body count rises they soon realize that Jo’s sanity isn’t all that is at risk. She has become the killer’s ultimate kill.

Excerpt:
Austin watched as the beautiful young agent examined the body. He waited for her to flinch or to show some facial reaction to the horrific sight, but none came. How could she not be affected by what she saw? More than half a dozen men so far had lost a meal at one time or another over the course of the last two weeks, including him, yet she knelt there, her eyes fixed on the body as if it were someone merely sleeping. Curious as to what she found so fascinating, he crept further down the incline, using the cover of the trees to obscure his location. Judging from the puzzled expression on the face of the ME.s assistant, he seemed just as intrigued by the woman’s behavior as he stood quietly to one side, his eyes leveled on her.

After several seconds, the agent slid the sheet back to reveal the length of the victim.

Then leaning over the body she appeared to be checking the ankles for any signs of ligature marks. Had she asked, he could have told her there weren’t any on either the ankles or the wrists. Decapitation was the only visible sign of injury on all of the victims. He watched as she moved to the feet and toes, taking note of how careful she was not to touch the body. Not that it mattered, he suspected, like the others, the body would reveal no trace evidence or finger prints that would lead them to the killer.

“Sheriff, could I see you a minute,” Jo asked.

He stepped out into the open just as she turned, still squatting next to the body. “Find something?”

“The finger nails. You mentioned in your report that you suspected they’d been clipped to eliminate trace evidence.”

“So what if he did it so as to obscure their identities as well?”

“How’s getting rid of their nails going to hinder the identity process?”

“Not so much their physical identity, but the lifestyle they led,” she answered. Taking the

Woman’s hand, Jo held it so that he could view the tips of the fingers. “When I first reviewed the file you sent, I suspected these women were prostitutes and that’s why they hadn’t been reported missing. But what if they aren’t? Notice how the cuticles are trimmed but the polish has been removed. This woman has had regular manicures.”

“If these women are likely to be missed, then why haven’t they been reported missing?”

“I’ve been giving that some thought,” Jo said and carefully replaced the woman’s hand.

She then turned, her elbows resting on her knees, and gazed up at him, “What if they aren’t missing yet?”

“A vacation or a business trip?”

She shrugged her shoulder. “Could be.”

He grinned. “Thanks, Jo.” The corner of her mouth came up, as did one eyebrow, and he realized what he’d just done. “Or would you rather I call you Special Agent McDaniels? I’d hate to get my ass kicked by a girl.”

The smile that followed was like a ray of sunshine after a day’s downpour. “Jo is fine.” Then just as quickly as it appeared, it disappeared, as her gaze returned to the headless corpse.
~~~~~~~~
Whew! Sounds like an intriguing read!

Well Friends, that wraps up another edition of Saturday Spotlight. I have a wagon load of stuff to tell you about my experiences here in Bandera so check back often!

Until later....take care & Be BLESSED!
PamT

Hello Anne, sounds like a nailbiter and a terrific read. Best wishes for many sales.

Thank you, Tanya. I appreciate the well wishes.