#SaturdaySpotlight is on Clare Revell @ClareRevell & her "Say a Prayer" series!

Well, another month has passed and there is still no reprieve in sight with Covid-19 nor the civil unrest. I. Am. SO. T-I-R-E-D of the negativity....and that's all I've got to say about that!

Today's guest is no stranger to our blog. Clare Revell has been here numerous times with many of her books and let me tell you, folks, there are a ton of them! This lady cranks them out quicker than anyone I know! And they are all excellent stories.

This time Clare is sharing with us her brand new series, released entirely last month. Take it away Clare....

DC Zander Ellery isn't sure which he dislikes the most: New partners, rookie female officers, or cases he can't solve. Right now he has all three.

DC Isabel York is fresh out of uniform and out of the proverbial frying pan into the fire as her personal and professional lives clash with her first case—ten stolen works of art.

When a postcard arrives addressed to Isabel with a cryptic message on it, it's just the beginning. The mystery deepens as the first of the stolen paintings is found alongside a dead body—bound and gagged and left posed in prayer at the place depicted in the postcard.

Are nine more murders coming? Can Zander and Isabel find the missing paintings and solve the murder before another victim falls?

As the body count increases and more paintings are recovered, DC Zander Ellery and his partner DC Isabel York are under increasing pressure to catch the killer the press have dubbed the Prayer Slayer.

A few tenuous links are all they have between the deaths of three young, pretty women. The new Chief Superintendent is only adding to the pressure and seems to be picking on Isabel more than any other officer.

Torn between his urge to protect his partner and his need to solve the case, Zander sits his sergeant's exams, hoping once they are over, he won't be so distracted. But a rocky relationship with his girlfriend and one more murder only adds to his stress.

With trouble on the streets, DS Zander Ellery is under even more pressure to solve the case of the Prayer Slayer.

His partner DC Isabel York is convinced she is being targeted, as all the postcards the Slayer sends are addressed only to her.

With Zander and Isabel pulled in different directions, the body count escalates, until the case explodes in a direction no one could foresee—Something that will test everyone to the limits of their experience and faith.

Just when things couldn't get much worse, they suddenly do. With DS Zander Ellery in jail, his partner DC Isabel York fights to clear his name. Not an easy task when she is suspended from duty and the evidence against him is compelling.

Finally, pieces begin to fall into place, but to catch the Prayer Slayer once and for all, both officers must walk down a dark path where their very souls are at risk of being taken. 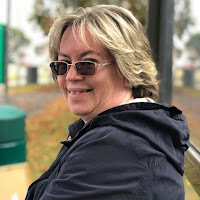 Clare is a British author. She lives in a small town just outside Reading, England with her husband, whom she married in 1992, their three children, and unfriendly mini-panther, aka Tilly the black cat. Clare is half English and half Welsh, which makes watching rugby interesting at times as it doesn’t matter who wins.

Writing from an early childhood and encouraged by her teachers, she graduated from rewriting fairy stories through fan fiction to using her own original characters and enjoys writing an eclectic mix of romance, crime fiction and children's stories. When she's not writing, she can be found reading, crocheting or doing the many piles of laundry the occupants of her house manage to make.

Her books are based in the UK, with a couple of exceptions, thus, although the spelling may be American in some of them, the books contain British language and terminology and the more recent ones are written in UK English.

The first draft of every novel is hand written.

She has been a Christian for more than half her life. She goes to Carey Baptist where she is one of four registrars.

WOW, Clare...what a great premise for a series. We certainly wish you the best of luck and God's blessings with it!

Well Friends, that's all for today. Remember, it's your last chance to enter my monthly drawing and I've added the option to get 1 month Audible membership into the mix so be sure to leave a comment!

Until next time take care and God bless.
PamT
Posted by Pamela S Thibodeaux at 1:30 AM

All of the books sound fantastic.

These books sound like great reading! I love British mysteries. Wishing you every success.

Clare, what a great idea for a series and sounds like you developed it well. Nobody beats the British for crime fiction. Best wishes on your launch!

Great post. Of course, now Dionne Warwick's I Say a Little Prayer for You is on a loop in my head. LOL, I suppose it could be a lot worse. Best of luck with your writing. D. V. 🦉

Sounds like a great series! Wishing you many sales!

I agree, Pam. I'm so weary of it all. Wow, this series is right up my alley. Sounds fantastic. Best wishes!