#SaturdaySpotlight is on Mary Alford & Grace and the Rancher

Our guest today has shared treasures with and been in our spotlight before so please welcome Mary Alford back with an excerpt from her book Grace and the Rancher! 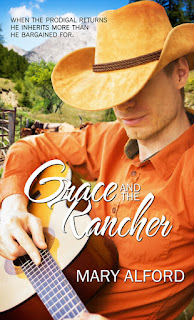 Grace Bradford is living a lie. To the world she has the perfect life: A promising country music career and a husband who adores her. But her husband isn't the man everyone believes him to be. When a car accident widows her and ends her career, Grace escapes to Delaney Mountain. But moving to the remote town doesn't wipe away the ugly secret of her marriage. Kyle Delaney never intended to return to Delaney Mountain, but he promises his dying father that he'll turn their land into a working cattle ranch. He uproots his life in Austin, sells his flourishing business as a music agent, and returns to the Colorado town of his childhood. Can a runaway singer and a makeshift rancher, thrust together by circumstance and held together by the common thread of loss and a love of music, find hope and a happily-ever-after under the stars of Delaney Mountain?

Excerpt: Grace Bradford cast a worried glance out the storefront window as snow continued to fall. “It’s really coming down out there.”

Martha McDougal, the store owner, stopped to watch the winter wonderland unfolding outside. “The storm seems to be moving in earlier than was expected. I don’t like it. Let’s give it another hour, and if we don’t have any customers, we’ll close up shop. I sure don’t want you to get stuck down here.”

Grace smiled at her friend’s consideration. When she’d first arrived in town eight months ago, widowed, injured, flat broke, and desperate to find a job and rebuild her life, Martha had accepted her. Grace had been such a wounded soul back then. Still, Martha hadn’t asked a single question. She’d simply given Grace a job and invited her to the small church on the edge of town. Grace had found a home.

“We had a delivery yesterday, thank goodness, so there's plenty of food on hand. Derek put some of the stuff away during his shift yesterday, but I don’t expect him to be in today. Since I doubt we’ll have a customer, you might as well stock a few items. But I’m serious, Grace. If no one comes in soon, go home. When you get ready to leave, just lock up and go. I think I’ll head out before the storm shuts down the pass outside of town, and I can’t get home to Ed.”

Grace walked Martha to the door. “That’s a good idea. You have a lot farther to go than I do, and Ed will be worried. Be careful. I’ll call you when I’m leaving.”

“All right, hon. I’ll talk to you soon.” Martha hugged Grace then forced the door open against the blustering wind and slipped into the increasing snowstorm.

Once Grace was certain Martha’s car would start, she closed the door and went to the back of the store. She brought out boxes of dry goods while keeping a close eye on the weather. By the end of the hour, she’d managed to shelve most of the stock. She turned up the radio and listened to the local weather report.

“Most of the roads leading into town have closed already or will be closing soon. If you don’t have to be out today, then we suggest you stay home. We’re expecting up to three feet of fresh snow with the storm clearing out sometime tomorrow. This one’s going to be a bugger, folks.”

It was time definitely to call it quits. She picked up the items she needed, left a check in the register, and then called Martha. “I’m heading out now. I have everything put away. If I’m able, I’ll come in tomorrow to make up my time.”

“Are you sure you don’t want to wait out the storm at the store?” Martha asked. “It’s really coming down here. I’ve barely made it home.”

Although the thought was tempting, Grace just wanted to get home. Her dog, Lizzy, would be anxious in this weather. “Thanks, but I’ll be OK, and it’s only a few miles. I’ll see you soon.” She carried out her groceries then turned off the lights and locked up. But the farther she drove up Delaney Mountain, the more doubts she had. Maybe she should have stayed in town.

Grace blew out a frightened sigh, and her breath chilled the air as she clutched the steering wheel. Her palms grew sweaty as the SUV slipped and slid on the icy road.

She slowed to a crawl as ice and snow began to accumulate on the windshield, destroying visibility. She strained to see, her gaze locked on the road ahead, as the storm continued to intensify.

She remembered another terrifying time less than a year earlier. The day her promising career had ended with the death of her husband. To the world, she and Nick had been one of Nashville’s up-and-coming couples. Grace knew nothing was further from the truth. That night more than her career had perished. Everything she believed to be real about her marriage and her husband died along with Nick.

Father, please, help me let go of the hurt…

Even today—even right now when she knew she should be focusing on the road and the weather— letting go was a next-to-impossible task.

At times, Grace still woke up in the middle of the night and could feel the car crashing into the tree, could feel the excruciating pain of the steering wheel slamming into her throat as it damaged her vocal cords. She couldn’t scream or cry out for help.

Grace shoved aside those dark thoughts and scrubbed a hand over weary eyes. She leaned forward. She could barely see the hood, much less the road. The conditions were worsening by the minute, and she had no idea how much farther the vehicle would go. She eased down on the gas pedal, and the tires spun, spewing icy debris against the underside of the SUV.

The vehicle jerked forward as the tires caught.

Grace whispered a thankful prayer. The road continued its upward climb as it snaked around the side of the mountain. Her heartbeat pounded a frantic rhythm as she reached another ninety degree bend. To her right was a sheer drop off. She wouldn’t survive the fall if the SUV went over.

Grace gently nudged the steering wheel, at odds with her terror. She had almost reached another treacherous turn when the vehicle slid closer to the edge. She panicked and jerked the wheel in the opposite direction. The vehicle skated backward some twenty feet. The tires lost their tenuous grip and slithered closer to the drop-off.

She floored the gas and the vehicle jerked forward, swerved sideways, and headed straight for the overhang. Grace screamed and tried to turn the wheel but it was useless.

The Jeep didn’t react to anything. She had lost control. She closed her eyes. She didn’t want to die. Not when she’d just started to live again. ‚Please, Lord, no.‛ Grace barely got the words out before the Jeep hurled itself head first over the side of the mountain. 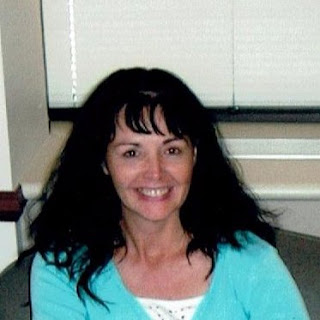 Mary grew up in a small Texas town famous for, well not much of anything really. Being the baby of the family and quite a bit younger than her two brothers and her sister, Mary had plenty of time to entertain herself. Making up stories seemed to come natural to her.
As a teen, Mary discovered Phyllis Whitney and Victoria Holt and knew instinctively that was what she wanted to do with her over-active imagination.
She wrote her first novel as a teen, (it’s tucked away somewhere never to see the light of day), but never really pursued her writing career seriously until a few years later, when she wrote her first inspirational romantic suspense and was hooked.
Today, Mary still lives in Texas, and still creates people facing dangerous situations. In fact, she can’t think of anything else she’d rather do.

Learn more about Mary at www.MaryAlford.net, or send her an email at maryjalfordauthor@gmail.com or connect with her at the following locations:

Grace and the Rancher can be purchased at Amazon, B&N and Pelican Book Group.


I hope you enjoyed today's spotlight and that you'll join me each week for Tuesday Treasures, Thursday Thoughts and Saturday Spotlight.

Until next time take care and God bless.
PamT
Posted by Pamela S Thibodeaux at 5:25 AM

Great excerpt, Mary! Talk about a cliffhanger. Thanks for sharing your story with us.

I, too, loved Victoria Holt and Phyllis Whitney and used their books while teaching middle schoolers.
Gripping excerpt! Need to get the book and find out what happened to Grace and her jeep hurtling over the cliff!
Best wishes for success.


Barbara Britton said...
Great excerpt, Mary! Talk about a cliffhanger. Thanks for sharing your story with us.

Thanks Barbara. I'm happy to be here today.

Susan Coryell said...
I, too, loved Victoria Holt and Phyllis Whitney and used their books while teaching middle schoolers.
Gripping excerpt! Need to get the book and find out what happened to Grace and her jeep hurtling over the cliff!
Best wishes for success.

Thanks Susan. I hope you enjoy the book.


Thanks Tanya. I love the cover too.

Very engrossing excerpt! This reads well and is clearly a winner. Congrats.

This sounds like a great story. And poor, Grace! To lose her singing voice. I can't imagine....
Many blessings for you and your book!

Whew! What a nail biter! Lovely!
Wishing you all the best with your book!
Sue

What a gripping excerpt. I have to get the book to find out what happened!

Hope you enjoy it Connie.

Thank you all for stopping by, and thank you Pamela for letting me be part of the blog.